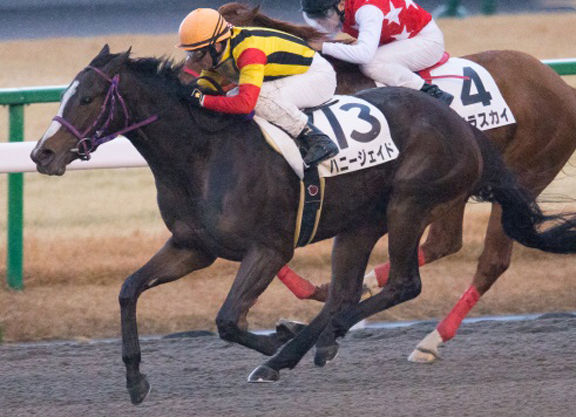 In this continuing series, Alan Carasso takes a look ahead at US-bred and/or conceived runners entered for the upcoming weekend at the tracks on the Japan Racing Association circuit, with a focus on pedigree and/or performance in the sales ring. Here are the horses of interest for this weekend running at Fukushima and Hakodate Racecourses:

9th-HAK, ¥19,950,000 ($185k), Allowance, 3yo/up, 1200mT
SAN JOSE TESORO (c, 3, The Factor–Cabaret Starlet, by Tale of the Cat) graduated at first asking over 1400 grassy meters at Chukyo in March (see below, gate 6), but was down the field in two tries over a mile. Out of a half-sister to Canadian Horse of the Year Arravale (Kris S.), SW Hollywood Hideaway (Zensational) and GSP Hollywood Critic (Blame), San Jose Tesoro, whose 2-year-old Carpe Diem half-sister was purchased by Katsumi Yoshida for $250K at OBSMAR this year, was a $30K KEEJAN short yearling and $100K OBSAPR purchase. B-Sheltowee Farm, WMK Racing LLC, Patricia Pavlish & Joe Miller et al (KY)