Breeders’ Cup Board Votes To Keep 2019 Event at Santa Anita 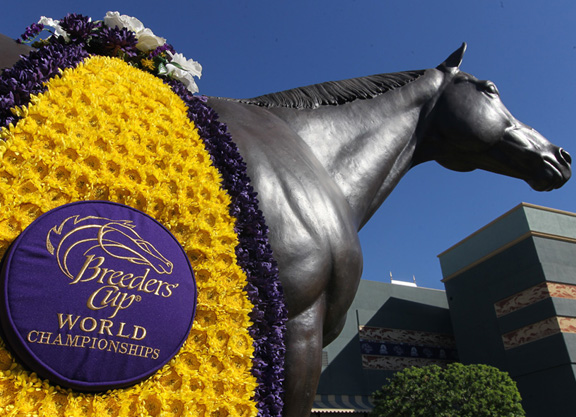 The Breeders’ Cup ended months of uncertainty when announcing Thursday that the 2019 event will be run at Santa Anita, as had been originally planned.

The announcement included a statement, which read: “Foremost among the core values of the Breeders’ Cup are the safety and integrity of the competition and we hold ourselves, our host sites and our competitors, to the highest standards of both. It is clear that meaningful and effective reforms and best practices have been implemented in recent months at Santa Anita through the collective efforts of The Stronach Group, the Thoroughbred Owners of California, the California Thoroughbred Trainers, and the California Horse Racing Board,” said Craig Fravel, President and CEO of the Breeders’ Cup. “We fully embrace those reforms and will devote our time and energy in the coming months to further advance those efforts. We look forward to showing the world the best in Thoroughbred racing at one of its finest venues.”

Thirty horses had to be euthanized at the meet, which put the inherent dangers of the sport under a microscope and caused a media firestorm and harsh criticism from animal rights groups. While concrete answers as to why the number of fatalities spiked at the meet have yet to be reached, some horsemen argued that there was something wrong with the racing surface.

There was widespread speculation within the industry that should the Breeders’ Cup decide to take the event away from Santa Anita, it would be moved to Churchill Downs. But while Churchill might have seemed a logical alternative because of its history of handling big events such as the Breeders’ Cup itself and the GI Kentucky Derby, holding the races there also involved obvious risks, as recent news reports indicated Churchill might have safety problems of its own. According to the Louisville Courier-Journal, Churchill Downs lost 43 Thoroughbreds to racing injuries between 2016 and this March. That amounts to 2.42 per 1,000-start average, about 50% higher than the national average during the same three-year span.

The decision was made at a regularly scheduled meeting in Lexington of the Breeders’ Cup Board. The Board consists of 14 members and, according to the press release, it reached a unanimous decision.

During the troubled Santa Anita meet that ended June 23, management instituted several measures in an attempt to make racing safer at the Arcadia oval. Many involved putting together a team of veterinarians who were assigned the task of examining every horse as closely as possible before they were allowed to race or work out. They also took a tougher stand on trainers, going so far as to ban Hall of Famer Jerry Hollendorfer after a horse he trained named American Currency became the fourth under his care to die at the meet.

Fred Hertrich, the chairman of the Breeders’ Cup board, made it clear that the entire board was impressed by the steps Santa Anita had taken to make the sport as safe as possible and that that weighed into its decision.

“As far as what the Breeders’ Cup board decided, we were very impressed by what The Stronach Group has done as far as how hard it has worked to address the problems that it faced and everything it has done to combat them,” Hertrich said. “Kudos to The Stronach Group for taking a lead when it comes to everything that has to do with safety issues involving this sport. I hope what they are doing is viewed as a template for the rest of the sport as we move forward to make the sport as safe as possible for the horses and jockeys. I am just so happy that the industry is now looking at these issues and saying, ‘You know what, we have to do a better job than we have been doing.’ This is not just about the Breeders’ Cup. This entire industry is starting to say we need to look at what is going on and get a handle on things.”

Belinda Stronach, the chairman and president of The Stronach Group, addressed the board before it voted. Following the Breeders’ Cup’s announcement, she issued a statement thanking the board.

“Thank you to the Breeders’ Cup Board of Directors for their support today in reaffirming their commitment to host the Breeders’ Cup World Championships at Santa Anita this November,” she said. “Santa Anita and The Stronach Group remain steadfast in our commitment to put the health and safety of the horses and riders above all else and we are pleased that the Breeders’ Cup Board recognized and shares in that goal. We also thank our state’s industry stakeholders, including the Thoroughbred Owners of California, the California Thoroughbred Trainers, the California Thoroughbred Breeders Association, the California Horse Racing Board, along with the hard-working men and women who work directly with the horses, and those employees who take care of our customers, for embracing the reforms that have been put in place this winter at Santa Anita as we collectively work towards making California racing the safest and best in the world.”

Even PETA, the animal rights group that at times has harshly criticized Santa Anita and horse racing in general, applauded the Breeders’ Cup’s decision to keep the event at its original location.

“Who could possibly have thought that it was a good idea to move the Breeders’ Cup from a track that is trying to stop the carnage to one with an even more shameful record of fatalities?,” PETA Senior Vice President Kathy Guillermo said in a statement. “The Breeders’ Cup board made the right decision. Now, it should disallow trainers with multiple medication violations from all races.”

Keeneland also weighed in, issuing a statement from its president and CEO Bill Thomason applauding the Breeders’ Cup’s decision.

“Keeneland fully supports the decision of the Breeders’ Cup Board of Directors to keep the 2019 World Championships at Santa Anita,” Thomason said. “We know it was not undertaken lightly, and required extensive thought and discussion by all parties involved. Given the continued reforms implemented by The Stronach Group for the safety of horses and jockeys, Santa Anita has positioned itself to be an appropriate host site for this year’s World Championships. The Breeders’ Cup has the best interest of our equine and human athletes at the heart of every decision it makes, and this one is no exception.”

Despite the reforms Santa Anita has made and the vote of confidence it received Thursday from the Breeders’ Cup board, there’s no doubt that the entire industry will be watching this year’s two-day championship event with a sense of worry, as the problems Santa Anita have encountered so far this year will hover over the 2019 Breeders’ Cup. The protestors that camped outside Santa Anita’s gates for much of the meet will undoubtedly be back as will a media that clung to the story and would not let go. Should there be a catastrophic breakdown during the Breeders’ Cup, the negative impact will no doubt be a huge blow to the entire sport.

Fravel said the focus needs to be on doing everything possible to make sure there are no problems at this year’s Breeders’ Cup and he expressed confidence that the Breeders’ Cup and Santa Anita teams will do whatever it takes to have a safe two days of racing.

“I am not sitting around every day worrying about the what ifs or what might happen,” he said. “We will focus on making sure it is safe. We believe it is safe now, but I think the protocols and the veterinary scrutiny that horses who come to the Breeders’ Cup are under is as good, if not better, than anywhere in the world. We will have 14 regulatory veterinarians on site a week before, looking at horses throughout the week. We will have out-of-competition testing throughout the summer. There will be no stone unturned in order to make sure things go well. I am going to have faith in that. Obviously, during the races, as I do every year, I will be watching very carefully and hoping for the best, but I am not going to dwell on anything other than seeing that we do everything we can to make sure everything works.”

Fravel added that with the decision of whether or not to keep the event at Santa Anita behind the Breeders’ Cup team, he is looking forward to “getting to work.”

“There have been a lot of moving parts over the last four or five months, some trauma and some great progress being made,” he said. “So now it’s time to roll up our sleeves and work with Santa Anita to move this forward. Whenever you are operating under a little bit of uncertainty, that makes things hard. So now we have a clear path and clear sailing and our goal is to put on the best event that we can.”