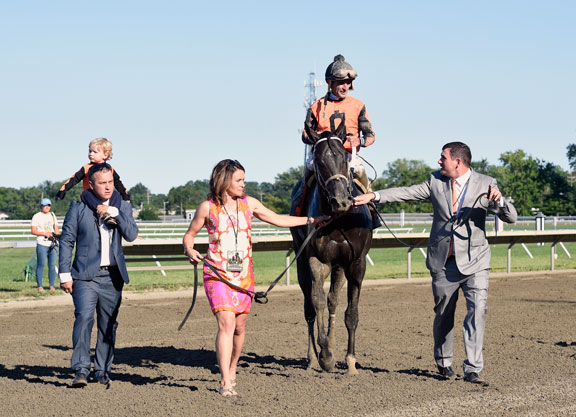 LEXINGTON, KY – The Keeneland November Breeding Stock Sale continued to churn out steady results as the auction’s Book 4 section opened Saturday in Lexington. Brad and Misty Grady made the day’s highest bid when going to $235,000 for the 4-year-old broodmare K J Warrior (Tapit). The gray mare was consigned by Francis and Barbara Vanlangendonck’s Summerfield on behalf of Stonestreet Thoroughbred Holdings. Summerfield and Stonestreet teamed up to sell two of the 12 six-figure offerings Saturday. A filly by Kitten’s Joy brought the top weanling price of the day, selling for $145,000 to En Fuego Stables from the Perrone Sales consignment.

Brad and Misty Grady have been busy all week at Keeneland, buying mares to support their recently retired Grade I winner Girvin (Tale of Ekati), who stands his first season at stud next year at Ocala Stud. Before heading home to Texas Saturday, the couple made their biggest purchase of the auction when paying a session-topping $235,000 for K J Warrior (Tapit) (hip 2123).

Consigned by Francis and Barbara Vanlangendonck’s Summerfield on behalf of Stonestreet Thoroughbred Holdings, the 4-year-old mare sold in foal to Kantharos. She is a daughter of J Z Warrior (Harlan’s Holiday), a half-sister to Grade I placed A Z Warrior (Bernardini) and graded stakes winners Jojo Warrior (Pioneerof the Nile) and E Z Warrior (Exploit).

“She has a fast family and we think she’ll fit well with Girvin,” Grady said after signing for the mare while seated in the pavilion with his wife and bloodstock agents Bobby Dodd and Jacob West. “My wife and I are really going to support Girvin–that’s who all these mares are for.”

“I have Jacob West doing a lot of the pedigree work,” Grady said. “We are trying to find mares with speed and obviously as pretty and correct as we can buy. We are putting Classic pedigrees to him, too. We don’t know what’s going to work, so we’re trying a little variety.”

He continued, “I’ve got Bobby Dodd here with me, he’s my bloodstock agent through and through, and when you buy the horses that fit Bobby’s criteria and Jacob’s criteria, they are going to be at the upper echelon of the prices.”

In horse racing only since 2009, the Gradys got their first taste of racing at the highest level with Girvin, who was originally purchased as a pinhooking prospect but who carried Grady’s colors to victory in the 2017 GI Haskell Invitational, GII Louisiana Derby and GII Risen Star S.

“My wife has always liked the breeding operation,” Grady, who estimated they would be sending 30 mares to Girvin next season, said. “That’s more her love than mine. I don’t mind it, but she likes the horses. So, happy wife, happy life. I love the racing and I love the pinhooking, too. I like fast stuff, the breeding, that’s her deal.”

Girvin (Tale of Ekati–Catch the Moon, by Malibu Moon) will stand his first season for $7,500.

“Girvin is a beautiful horse,” Grady said. “He was a precocious 2-year-old, won as a 2-year-old first time out going :10 1/5. He won several graded stakes and he was pretty versatile. Beau Lane has really got me pumped up on the horse’s pedigree–going back to the 1800s to Domino–and he’s educated my wife and I on the pedigrees. We’ve been buying some mares that are Beau Lane recommended, too. Beau Lane will get you really excited and willing to spend a lot of money on pedigrees.”

As for plans for Girvin’s first foals, “We’ll do a little bit of both, [selling and racing],” Grady said. “The bulk of them, we’ll run ourselves.”

Asked if he planned on continuing his buying spree at the November sale, Grady said, “My wife and I are going home this afternoon. We have young kids and we can only keep my wife away from the kids for so long. Jacob will still be here shopping the sale for us.”

I’m Pretty Strong Heading Down Under

I’m Pretty Strong (Street Cry {Ire}) will be heading to Australia where she may continue her racing career before becoming a broodmare after Boomer Bloodstock’s Craig Rounsefell signed the ticket at $220,000 for the dark bay filly (hip 2099) from the Upson Downs Farm consignment.

“She’s been purchased for clients in Australia,” Rounsefell said. “We think that, with her residual value as a broodmare prospect, she’s extremely exciting. Street Cry has been very much a proven stallion all over the world and particularly in Australia and she’s out of a champion turf mare.”

“This filly has shown a lot of ability on the track,” Rounsefell said. “With seven starts to date, she is one that we think, physically is still immature. We think there is improvement in her physically. She is going to really develop and let down. But we have time until the breeding season next year, so we will probably put her in training and, if she is measuring up down there, we’ll keep it going because we think she has a lot of ability on the track. She might race in Australia, but predominantly she’s been bought as a broodmare.”

Australian buyers have been active all week at Keeneland and Rounsefell said the success of the progeny of mares imported from America have made the move a popular one in the country.

“The statistics don’t lie,” he said. “American mares have done very well in Australia. They’ve over achieved percentage wise. There is a small number of them there and they have done really well. They’ve produced top-quality horses. The gene pool in Australia is getting very condensed down the Danehill line, so there are people here looking to expand their bloodlines and to bring in the American speed. The market has been very strong in Australia and people are looking to replenish their broodmare bands and this is the best place to do it.”

Of the market at Keeneland this week, Rounsefell said, “We’ve followed quite a few up and the two that we really wanted we walked away with. We tried on a number of others up to a point, but I think the market is very strong, like it is all around the world, for anything that is commercial. There are plenty of breeders who made money at the yearling sales and are looking to continue their

Jim Perrone sold four horses on behalf of Jon Starr during Saturday’s session of the Keeneland November sale, but it was a daughter of Kitten’s Joy who was the obvious standout. The weanling sold for $145,000–highest foal price of the day–to En Fuego Stables. Starr purchased the mare Sunday Sport (Honour and Glory), with the filly in utero, for $20,000 at last year’s Keeneland November sale.

“Every day, she was nothing but class,” Perrone said of the weanling (hip 2268). “She came in from Oklahoma and she went over to Polo Green Stable, to Nobu Araki. He made her beautiful. The horse did it herself. She was correct, had a big walk, and looked good and showed class. As the sale went on, she was one of the better horses of the day. We intentionally put her on this day because of that.”

Starr served as mayor of Hot Springs, Arkansas in the 1980s, and his success Saturday proved popular with the auctioneers at Keeneland.

“He owned the Thoroughbred sale company in Arkansas,” Perrone explained. “I think he started half of these auctioneers when they were young. He gave them their first jobs.”

Araki added, “Everyone [from the auction stand] came out high fiving after she sold.”

“Jon is very good at that,” Perrone said. “He can pick out those older mares who have some quality to them. That’s what he does. He keeps some mares in Oklahoma. He foals them in Oklahoma and has someone raise them for him there. Then he ships them to Nobu for a couple months to refine them and get them ready for the sale.”

The weanling impressed Araki right from the start.

“She was one of my favorites,” he said. “As soon as she stepped off the van, she was my favorite. She is the most correct Kitten’s Joy I’ve ever seen.”

Of his results for the day, Perrone said, “I sold four for Jon today. The other three we just brought down and found new homes for. This one was the home run.”

Iowans Jeff and Robin Kerber added to their fledgling broodmare band with the $130,000 purchase of Good Grammar (Exchange Rate) (hip 2073) Saturday at Keeneland. Consigned by Darby Dan Farm, the 4-year-old mare sold carrying a foal from the first crop of Grade I winner Klimt (Quality Road).

“She is young and comes from a good family,” Jeff Kerber, who did his bidding out back with bloodstock agent Mike McMahon, said.

“Klimt is a sire we wanted to get–that Quality Road line is so hot,” McMahon added.

The Kerbers were quickly back in action Saturday, again paying $130,000 to secure the broodmare prospect Pray for Leslie (Bernardini) (hip 2206) from the Lane’s End consignment. The 3-year-old mare is out of multiple graded stakes placed C J’s Leelee (Mizzen Mast), a half-sister to Grade I winner Capo Bastone.

The Kerbers are building a commercial broodmare band which currently numbers five head. Kerber admitted it’s been tough bidding at Keeneland this week.

“We were tired of losing,” he said with a chuckle. “It’s been very difficult.”

McMahon added, “We’re pretty picky and the ones we like have been popular.”

The Kerbers have been involved in racing for several years, but have decided to up their participation in the game after selling the family’s livestock-based Kerber Companies earlier this year.

McMahon revealed his client’s hopes for the new broodmare band.

“I think he said something really cool just before,” McMahon said of Kerber. “He said, “We’d really like to breed a nice one.’ I think that’s a good goal.”