Home » Archive » Shared News » Body and Soul: It's More Than a Foot

Body and Soul: It's More Than a Foot 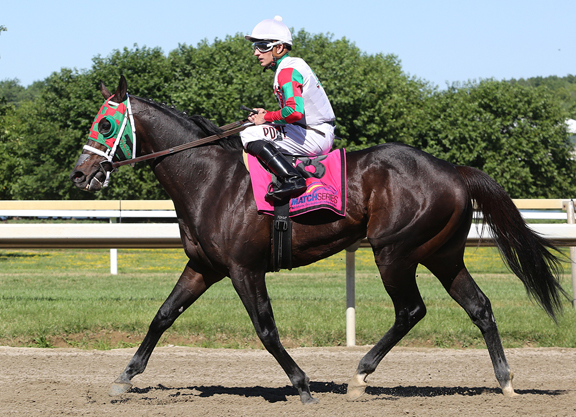 People who are unfamiliar with the equine biomechanical process (which started in the late 1940s in the Quarter Horse industry) often approach us and right off the bat ask: “Just what is it that you do?” The quick and simple answer sometimes gets the point across quickly, to wit:

“We take numerous measurements of a Thoroughbred's body and an ultra-sound scan of its heart, compute the numbers and tell you what kind of automobile you have and if the engine is compatible with that car.”

Occasionally the look we get is akin to “Uh, duh?”–though we note anecdotally that women seem to get it quicker. We go on to explain that you wouldn't want a Maserati with either a Honda Civic or Ford Explorer engine–one wouldn't get you up to 90 without blowing a gasket and the other wouldn't get you to 90 for a few minutes. Nor would you want a Volvo sedan with either a Maserati or Dodge Ram engine–one might blow right through your dashboard if you floored it, the other might carry you into orbit.

We also explain that our findings are more in keeping with the language of the racetrack: We can project a horse's biomechanical functionality as a racehorse as early as 15 months. We might find the horse's power through its quarters and ilium-femur-tibia combination plus the relationship of its various body lengths and square body set should set the horse up as a two-turn cruiser with a good finishing kick. On the other hand, the horse might be lower to the ground at the elbow than the flank, have short front legs and a whopping set of quarters, which would indicate it would be best as a downhill sprinter-miler that should be taken in hand and saved for the drive to build momentum from those mechanics. The cardio scan would give an indication of how far each might be able to go.

Sometimes we throw in a curve: “This horse will likely be better on the turf.” To which some would ask if the horse had big feet–you know, a “grass foot.” While we always look at the feet, we don't measure them, nor does the size fit anywhere into our projections. What does figure are certain components and how they relate to other components that might give a horse an advantage on the weeds.

To explain this further we have asked three of our clients for permission to use as examples colts that they bred which were analyzed biomechanically as yearlings. Two are still racing, one is long gone, but what we will present below is exactly what was written in the reports presented to them after each was analyzed. In addition, we have not discussed these horses with their respective trainers to determine what they thought of them or any issues which they had along the way. All we are doing is showing how sometimes things work out the way it was projected.

Bred by Vivien Malloy's Edition Farm in New York, this colt was sold at the Fasig-Tipton Saratoga New York-Bred Sale for $160,000 and pinhooked at that sales company's Gulfstream Park 2-year-old sale for $240,000.

This is a very nicely balanced and very powerful colt with several excellent properties and one or two that might help him show better as a turf horse. He has great power through his quarters and gaskins, and very good quickening ability through his rear triangles. However, he is a bit off the ground at the elbow and flank, and somewhat shorter in his front legs than his rear leg, which may cause a bit of pinwheeling. His humerus is long, however, and this could help his reach. His back length is also asynchronous in two respects, but not severely so. This combination is likely to reduce his extension, which can waste energy especially if pushed too soon in races beyond six furlongs. His Cardio Score, however, could provide the energy needed to be effective, especially if he likes turf, which is what his biomechanical profile suggests might be best.

Mango M. ran three times as a 2-year-old, all on the dirt, showing little, then was off from October until June of this year when he came out to finish second in a six furlong state-bred turf maiden special at Belmont, then won his next start at nine furlongs on the weeds at the same track. This is your basic mid-sized SUV-type, like a Honda CRV.

Bred in Kentucky and raced for most of his career by Robert Spiegel, he was from the first crop of his sire out of an unraced daughter of GSW Ruff, who was bred and raced by Mr. Spiegel.

This is a well-made, somewhat closely-coupled colt with a great deal of power and substantial cardio system. He has the potential to come out early as a 2-year-old and show speed and versatility over a variety of distances as he gets older. There are three things to note in his physical make-up: First, he is quite short in his back, which might cut down on his stride extension somewhat, which could waste energy. Second, however, is that he has a seriously high Cardio Score, one of the highest in the database for a colt of his age regardless of pedigree, which should help in the energy department. Third, his ilium is longer than his femur and tibia, which should help propel him forward quickly when called upon. This factor sometimes causes too much stress on the front end, but he is leggy enough to overcome that.

Vision Perfect raced 19 times for Mr. Spiegel at distances from seven to nine furlongs, 18 on the turf, one time in a sloppy off-the-turfer in which he was way back. He broke his maiden at two in his second start, was then second in the GIII Pilgrim S., won two listed stakes on the weeds, and placed in a Grade III at three. He was claimed last year and has become a serious five-furlong turf runner with a Listed and Grade III success so far this year. He's the ultimate Nissan Altima.

Bred in New York by John T. Behrendt, he represented a popular cross in Argentina (Southern Halo, sire of More Than Ready, on Parade Marshal), where Mr. Behrendt acquired his dam.

Relatively Ready has some nice physical properties but several conflicting issues that are likely to reduce his overall efficiency and lower his class level. He is quite long in the back, a little short in the front leg and a bit off the ground in front. Though the latter two factors might cancel each other out, his very long humerus is likely to generate a climbing action, especially since he is very well geared behind for quick starts and sustained speed, which can propel the body upward. Horses like this generally waste a lot of energy early trying to get into a rhythmic stride, but he is blessed with a very decent Cardio Score that should help him overcome some of that problem. Still, his overall efficiency outlook is not that good beyond a mile, and that is likely to be on the turf.

Raced by Mr. Behrendt in partnership, Relatively Ready was up the track in an off-the-turf sprint maiden at Belmont, then won at a mile and a sixteenth on the weeds at Saratoga in his second start, then placed third in the GIII Pilgrim S. at Belmont and fifth in the inaugural Breeders' Cup Juvenile Turf at Santa Anita. His form subsequently declined and he made 13 more starts at NYRA, one on the dirt where he was unplaced, before being sold to Finger Lakes connections where there is no turf. He won two $7,500 claimers there in 26 additional starts. We'd classify him as a 1970s Jeep Cherokee.

It goes without saying that not all the analyses we perform are borne out on the racetrack, but one thing we will admit to is that we have a fairly decent insight into what combination of biomechanics may make a horse more efficient on the turf than some big feet.