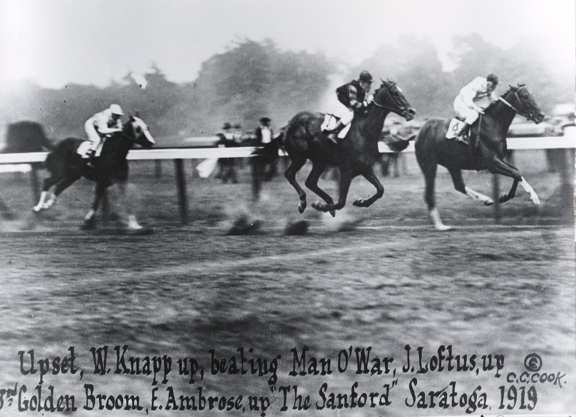 SARATOGA SPRINGS, N.Y. –The confluence of the number 13 and the word “upset” came into play perfectly Aug. 13, 1919, in a race that gave birth to Saratoga's oft-repeated citation as “The Graveyard of Favorites.”

Bad luck was a key ingredient to the only defeat of Man o' War, whose talents, even as a youngster, were considered otherworldly.

That the Sanford S. was won by a horse coincidentally named Upset adds to the story.

That the riders of both Man o' War and Upset were denied licenses–without comment from The Jockey Club when their riding licenses came up for renewal the next year–adds to its legend.

Heading into the six-furlong Sanford, it's difficult to overstate the regard held for Man o' War not only by the public but also by veteran horsemen and journalists, who unashamedly compared him to the earlier greats of the then-young 20th century, Colin and Sysonby.

That respect was earned with the ease of his victories in six previous outings, five of which were in stakes races, the last of which was a comfortable two-length tally over Upset, to whom he was conceding 15 pounds, in the United States Hotel S. over the course and distance of the Sanford.

Even though the margins of victory weren't nearly as gaudy as they would be during his campaign as a 3-year-old, racegoers knew that most of rider Johnny Loftus's energy was expended on throttling down his mount well before the wire.

Man o' War's bad luck began the morning of the race, when word came that starter Mars Cassidy was ill and unable to perform his duties that day. Summoned from the patrol judge's booth was a former starter, the venerable Charles Pettingill.

Pettingill had years of experience as a racing official, landing in New York after a tenure in the Midwest. “Mr. Pettingill is widely and favorably known as a racing official,” said the Morning Telegraph in its Aug. 15, 1900, edition, adding that he “… has the confidence of all horsemen,” and that with him in the stands “horsemen and the public will be well served.”

Unmentioned in the report was Pettingill's role in the 1893 World's Fair American Derby. Run amidst Chicago's marvels, mayhem and mass murders that year, as chronicled in Erik Larson's “The Devil in the White City,” Daily Racing Form breathlessly described the race nearly 40 years later in its June 22, 1935, editions as “one of the most sensational races run anywhere.”

“The horses were at the post for an hour and a half, during which Garrison received permission from the starter to dismount and fix the saddle girth on Boundless,” DRF reported. “While the other horses were fretting and stamping about with their weight up, Boundless was taking things easy with the result that when they finally were off he was a decidedly fresh horse. In the home stretch Garrison called on Boundless and he came with a rush to win by six lengths.”

Pettingill would have been comfortable if people had forgotten about that American Derby so many years before and, in a sense, the Sanford would go a long way toward achieving that hope, although perhaps not in a manner he would have preferred.

Man o' War's presence in the Sanford, run on a Wednesday, enticed 20,000 fans to the track.

Before the advent of pari-mutuel wagering, action was handled by bookmakers, and in most books the price on Man o' War was 1-2, with Golden Broom the second-choice, and the co-highweight at 130 pounds, at around 5-2.

Upset, with wily Willie Knapp aboard, and once again carrying 15 pounds less than Man o' War, was 8-1.

Pettingill kept the field of seven at bay for several minutes before letting them go, and when he did Man o' War was sideways and thoroughly unprepared.

“Man o' War was very fractious at the gate that day,” Loftus told Sports Illustrated's Jack Mahon in 1966. “He broke through about three times before the starter warned me to quiet down–or else.

“I wheeled Man o' War around for another try. My head was turned when the field was sent away. I wasn't ready.”

Golden Broom broke sharply to get the early lead with Upset assuming the stalker's position. Man o' War and Loftus gathered themselves and got back into the fray approaching the turn, but at that point it was Knapp's game to lose: Ahead of him he had Golden Broom in his crosshairs, and behind him he had Man o' War locked in what he called “a mousetrap,” pinned to the rail. He kept him there as long as possible, but at the eighth pole, deciding he could wait no longer, he let Upset go, gaining the lead while freeing Man o' War, which led to a nail-biting final furlong.

Upset lasted, just barely, and he got to the wire with DRF's official margin being a half-length, although Knapp insisted it was only Upset's head that beat Man o' War to the line. Whatever the margin, it was rapidly diminishing. Man o' War was in front 20 feet beyond the wire.

Loftus and Man o' War would exact their revenge next time out in the Grand Union Hotel S., then again in the Hopeful S., both at Saratoga, and they concluded the campaign with victory in Belmont's Futurity S.

Without explanation, The Jockey Club denied both Loftus and Knapp their riding licenses the next year, and neither rode competitively again.

Knapp enjoyed recounting the race to fans, horsemen and journalists while Loftus went to extreme measures to avoid the topic, even ducking his induction into the Jockey Hall of Fame at Pimlico so as to avoid talking about a $4,950 race more than 40 years in his past.

“I was the goat. That's all there was to it. It could happen to anyone,” he told Mahon.

“Heck, if a ballplayer makes an error, it's forgotten.”

Some baseball fans may disagree with that assertion: It took a championship 13 years later for Chicago Cub fans to forgive Steve Bartman for interfering with a foul ball that, if caught, could have helped their team snap a World Series drought that would eventually hit 108 years, and it took 18 years and a championship in 2004 before Red Sox fans could forgive Bill Buckner, a former Cub playing for Boston, for his fielding miscue that helped extend a World Series drought that reached 85 years.

And maybe it's coincidental that the “Black Sox Scandal” and the fallout from the fixed World Series between the Chicago White Sox and the Cincinnati Reds would taint the sporting world less than two months after the Sanford. It's a World Series that wasn't forgotten, especially by Hollywood: Well after Loftus's passing, the series was detailed in the hit movie “Eight Men Out” and was significantly referenced in “Field of Dreams.”

Perhaps redemption would have come to Loftus, a Chicago native, had he been relicensed and allowed to ride Man o' War to his great victories as a 3-year-old in 1920, a campaign in which he set five American records, seven track records, and equaled an eighth, while concluding his career with 20 wins in 21 starts and earnings of $249,465.

But Loftus was in constant company with the metaphorical black dog for his ride aboard Big Red.

“Johnny was so humiliated that he didn't speak to me for two or three weeks following the race,” said Knapp, who earned $25 for engineering Upset's upset and who vigorously disputed allegations against his friend and rival.

“Any talk of Johnny Loftus pulling Man o' War in the Sanford is pure bunk. I don't think he would have taken $100,000 to throw that race.”

Loftus and Knapp were among the top jockeys of the era.

Loftus was the regular rider of Sir Barton, who had swept the classics of 1919, while Knapp was “The Giant Killer” of his day: In addition to his defeat of Man o' War, he beat three Kentucky Derby winners with the otherwise undistinguished 9-year-old gelding Borrow in the 1917 Brooklyn H. and he won the 1918 Kentucky Derby with 30-1 Exterminator.

For their riding ability they were inducted into racing's National Hall of Fame, Loftus in 1959 and Knapp in 1969.

Although denied riding licenses, they both had successful second careers as trainers.