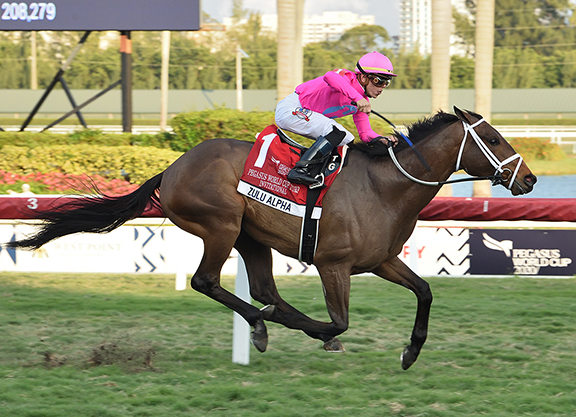 Already a smashing success story as a former claim turned multiple graded stakes winner, Michael Hui's Zulu Alpha (Street Cry {Ire}) enjoyed a dream run along the rail to earn his first top-level score in the GI Pegasus World Cup Turf Invitational S. last out, and the hard-knocking gelding is right back in the entry box as he attempts to defend his title in the 1 3/8-mile GII Mac Diarmida S. Saturday at Gulfstream.

Haltered for $80,000 out of a dominant optional-claiming victory in the summer of 2018 at Churchill, Zulu Alpha paid immediate dividends when annexing the GIII Sycamore S. next out at Keeneland, and he followed up with tallies in the GIII W.L. McKnight S. and Mac Diarmida here last winter. Narrowly missing Grade I glory when second by a neck in the GI United Nations S. three starts later, he was a wide fifth in the GII Bowling Green S. before capturing the GIII Kentucky Turf Cup S. Sept. 7 at Kentucky Downs. Off the board in the GI Joe Hirsch Turf Classic S. Oct. 5 at Belmont, the dark bay closed from last to be fourth behind Horse of the Year Bricks and Mortar (Giant's Causeway) in the GI Breeders' Cup Turf prior to his Pegasus Turf heroics.

Among the chief rivals for Zulu Alpha are Channel Maker (English Channel), a multiple Grade I winner who was second in the Joe Hirsch who looks to rebound from a last-place run in the Breeders' Cup Turf and 2018 Mac Diarmida hero Sadler's Joy (Kitten's Joy), who scored his first victory since then in the GIII Red Smith S. Nov. 23 at Aqueduct before running sixth in the Pegasus Turf. Len Green's A Thread of Blue (Hard Spun) looms as the speed for Kiaran McLaughlin. A wire-to-wire upsetter of the Saratoga Derby Invitational S. last summer, the dark bay couldn't quite stretch his speed to 12 furlongs when fourth in the Jockey Club Derby Invitational S. Sept. 7 at Belmont, and was runner-up in the GII Hill Prince S. before checking in fourth as the favorite after chasing a fast pace in the GIII Tropical Turf S. here Jan. 11.