Zoffany’s Thunder Moon Cuts a Dash In the National 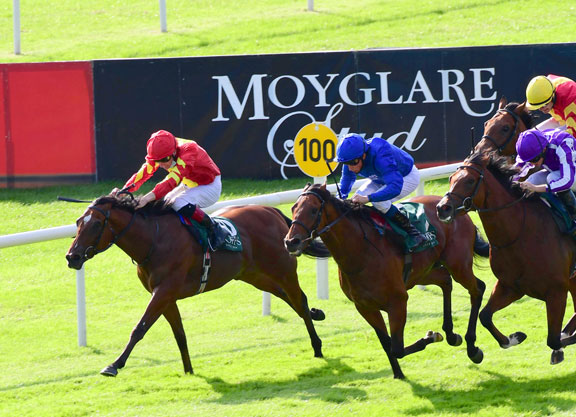 Sunday’s G1 Goffs Vincent O’Brien National S. at The Curragh looked of vintage variety on paper and although it lost a notable in Ballydoyle’s Battleground (War Front), an incident-packed renewal ultimately witnessed a colt to quicken the pulse in TDN Rising Star Thunder Moon (Ire) (Zoffany {Ire}). Purchased by Chantal Regalado-Gonzalez from Anne Marie O’Brien following his scintillating debut success over this course and distance Aug. 9, the 15-2 shot tracked the pace but was holed up with nowhere to go inside the final two furlongs. Declan McDonogh was looking for racing room down on the rail and it came in plenty of time as the fleet-footed bay darted through a gap to cut down St Mark’s Basilica (Fr) (Siyouni {Fr}) in the final 75 yards. Surging to the line, he had 1 1/2 lengths to spare over that rival’s fast-finishing stablemate Wembley (Ire) (Galileo {Ire}) who snatched the runner’s-up spot by a short head. “I was always going to ride him cool down on the fence from the one draw and take all the chances,” McDonogh explained. “They didn’t go hard enough to get a spread on them and so they bunched up a little bit and I had to check him. He was always giving me the feel that he was going to run them down and he was very impressive. He did extremely well to recover and win smoothly–he has the makings of a smart colt.”

Thunder Moon had won a Dundalk barrier trial July 29 prior to his emphatic 3 3/4-length defeat of the useful yardstick Colour Sergeant (Ire) (Kingman {GB}) here last month, but was still the least-experienced member of the line-up in what is always an daunting test for greenhorns. It is unknown how the Listed Chesham S. and G2 Vintage S. winner Battleground–who was taking out after a bout of coughing–would have fared, while Zhang Yuesheng’s Aug. 9 G1 Phoenix S. hero Lucky Vega (Ire) (Lope de Vega {Ire}) had little luck in running and finished with gusto to be fifth. The other 2-1 joint-favourite, Godolphin’s July 11 G2 Superlative S. scorer Master of the Seas (Ire) (Dubawi {Ire}), had his chance and looked the winner when swooping two out but had raced keenly from the break and probably paid for his exertions. Even Khalid Abdullah’s Masen (GB) (Kingman {GB}) was compromised, as he reared in the stalls and when given the go-ahead to start did too much on the front end. Added to that, Wembley and St Mark’s Basilica were tardy from the gates and the eventual runner-up lost almost as much there as he was beaten in the finish.

Despite the unsatisfactory nature of the way the contest unfolded, there was enough overall quality to make this a race to follow closely and few would bet against the winner coming out on top when meeting any of these rivals in the future. McDonogh had words of warning for those who hope for a second shot at Thunder Moon. “He was only in third gear through the race and didn’t even feel like he was in top gear at the line, so he’s a very exciting colt,” he said. “Even when I checked, he didn’t lose a whole lot of momentum and was straight back into his stride and powered on again. He has a great will-to-win and a great heart–he really wants to please you. I won this on another horse for Kevin Prendergast [Kingsfort (War Chant)] who had only won a maiden beforehand and it takes a proper one to do that. If he has a nice tempo to run at over a mile he’ll relax and stay well. I’d say the ground was as slow as he wants it, he has a real fast-ground action and I think fast ground will suit him really well as he’s a strong traveller. It’s been a long time since I rode one like him–he has a lot of qualities and has the mind to go with it.”

Thunder Moon’s family is that of the day’s G1 Irish St Leger heroine Search For a Song (Ire) (Galileo {Ire}), with his third dam being the high-class Moyglare distaffer Trusted Partner (Affirmed). It was a granddaughter of that G1 Irish 1000 Guineas heroine, the unraced Small Sacrifice (Ire) (Sadler’s Wells), who caught the eye of Anne Marie O’Brien at the 2007 Goffs November Mares Sale and she showed her keenness of judgement by securing her for only €18,000. A half-sister to the G3 Horris Hill S. third Aahaykid (Ire) (Intikhab), she went on to produce the Listed Sir Henry Cecil S. winner Table Rock (Ire) (Fastnet Rock {Aus}) who was later renamed Anticipation (Ire) in Hong Kong. Small Sacrifice is a full-sister to Out of Thanks (Ire), who produced the G3 Sirenia S. winner Love Lockdown (Ire) (Verglas {Ire}), while another of her half-siblings Tiny Petal (Ire) (Grand Lodge) threw the G1 Criterium International hero Vert de Grece (Ire) also by Verglas. This is the family of the GI Matriarch S. heroine Dress To Thrill (Ire) (Danehill) and her full-sister Polished Gem (Ire) who just this week further enhanced her mighty reputation. Small Sacrifice’s yearling colt is by Caravaggio.