Zipessa Looks to Give Empyrean Stables a Heavenly Finish 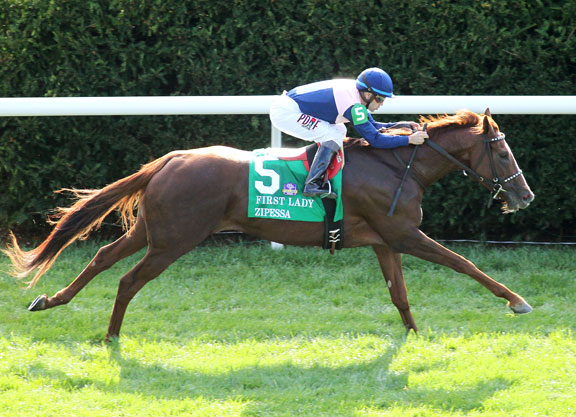 It was the final day of the final major yearling sale of 2013, and Patrick Gallagher knew that time was running out. He had been to Fasig-Tipton July and Keeneland September looking for a moderately-priced racing prospect for his fledgling Empyrean Stables and came up empty both times. Fasig-Tipton's Fall Yearling Sale in October was his last chance to get that horse.

“We didn't find anything that fit,” Gallagher recalled. “Either the horse was too expensive or didn't vet or there was some other issue. I got to October and wanted to be aggressive in trying to get something.”

Normally looking to spend around $50,000 per horse, Gallagher got a call from his bloodstock agent Marette Farrell imploring him to stretch his budget for a chestnut filly by City Zip near the very end of the sale. She was Hip 1113 out of 1,134 catalogued, and Farrell was smitten.

“What we loved about her was how athletic she was,” Farrell remembered. “She was very light on her feet and a really good mover. For me that's very important, more important than the profile. I had to call Patrick and say, 'I think this filly's going to be a little bit more, but she's by a really good stallion and we really, really like her. Could you, would you, please give us a little more?'”

Gallagher agreed, and the hammer dropped at $67,000 for the filly with Farrell as the winning bidder.

“I remember being so excited when we bought her, we went to the barn to have a few drinks afterward to celebrate,” Farrell said.

Thanks to Gallagher's determination, the now four-horse Empyrean outfit figures to be able to throw the old budget out the window going forward, as their last-gasp buy turned into Zipessa, upset victress of the GI First Lady S. Oct. 7 at Keeneland and a catalogued broodmare prospect from the St. George Sales consignment at this fall's Fasig-Tipton November sale.

Trained by Mike Stidham with his assistant Hilary Pridham, Zipessa showed promise from the jump, but endured hiccups as a 2-year-old and didn't debut until May 31 of her sophomore season.

“We thought she would be a nice filly and Mike and Hilary got her in July of her 2-year-old year,” Gallagher said. “They had her up at Arlington, breezed her once and said that, mentally and physically, she wasn't quite ready. They kept her in training, but didn't breeze her again until the third week of September. We went to Churchill and I'll never forget her first work at Churchill, Mike called me and said, 'We might have something special here.' She worked a half-mile with another 2-year-old they liked, dragged Hilary around the turn, took off down the backside and did it on her own.”

Zipessa was nearing her debut at Fair Grounds in December, but started to show signs of needing to mature further physically, so Stidham backed off on her once again.

“They felt that she was worth the time to give her,” Gallagher said. “She never had any issues where we were concerned about her soundness and we always were confident that she'd make it to the races. We just wanted to make sure she was ready.”

Zipessa was certainly ready by that May 2015 unveiling, cruising to a 6 3/4-length score sprinting on the Arlington polytrack. After a similarly impressive allowance victory in July over the Del Mar turf, her connections took a shot in the GI Del Mar Oaks. That backfired, as she was injured and faded to finish last of eight, but after being given nearly seven months off, she returned with a dominant optional claiming win at Fair Grounds in March and annexed the GIII Dr. James Penny Memorial S. at Parx in July. She had gone winless in her next eight starts, however, before triumphing at 16-1 in the First Lady.

“Last year, she did so well and when we discussed plans for this year, the plan and the hope was that she would win a Grade I,” Farrell said. “We felt that she did have it in her. A few things didn't go her way this year. I was actually a little concerned that maybe we were running out of time, but everything came together at Keeneland and she won emphatically, she didn't just win. I think she's really on a high right now, she's very confident in herself and Mike and Hilary have her looking fantastic.”

In her career finale in a few weeks, Zipessa will try to avenge a loss that nevertheless was arguably her career-best effort prior to the First Lady. Starting as a 53-1 longshot in the GI Breeders' Cup Filly & Mare Turf last November at Santa Anita, the speedster was sawed off at the start and found herself in an unfamiliar position, last of 13 through the first half-mile. Showing admirable courage, she weaved her way through traffic on the final turn and came with a strong late bid to finish fifth, beating five Grade/Group I winners home.

“We were super excited last year and obviously were not expecting to be last coming across the wire the first time,” Gallagher said. “She put in just an amazing run and we feel great about her again. She seemed to mature from four to five and got a lot bigger physically. She looks like she's in the best form of her life and looks as good as she's ever looked.”

Gallagher grew up in Sycamore, Illinois, about 60 miles west of Chicago. His family had saddlebred show horses and he went to graduate school at the University of Kentucky's Gluck Equine Research Center. While there, he met trainer John Ward and worked for Ward as an assistant trainer for a few years after graduating. Though he had a passion for the sport, like a lot of young people in the game, he eventually had to find a career with more security and, as a 31-year-old, he enrolled in law school to become a patent attorney.

“I loved working on the racetrack and being around horses, but it's certainly a tough life,” Gallagher said. “I never gave up my love of horses.”

One of Gallagher's classmates in his first year of law school was a woman named Emma Salustro. The two became friends, and Salustro's family liked going to the races at Arlington Park. After getting his degree, Gallagher was interested in investing in a Thoroughbred and approached Emma's father, Larry about creating a partnership, one that eventually became Empyrean.

Apart from Zipessa, Gallagher and Salustro also own Diadura (Hard Spun), a 'TDN Rising Star' who captured the Arlington-Washington Lassie S. last September, La Bruna Forte (Big Brown), a 6-year-old mare who they are retraining to become a jumper, and a 2-year-old Macho Uno filly who Farrell got for them for $50,000 as an OBS August yearling. The latter is one Empyrean may be grooming as a replacement for its barn star.

“She shows a lot of promise, not unlike Zipessa,” Gallagher said. “We're giving her time and making sure that we don't push her.”

That ethos of patience in Empyrean's approach has been rewarded so far, and it also makes them dream clients for Farrell and Stidham.

“They are the perfect owners, Patrick and Larry,” Farrell said. “They take the good with the bad, they take the news the same way and they love the game. They have a real appreciation for the horse and how it all works. They love going out in the mornings and watching them train, they love every aspect. They incorporate everybody as they go along, which I think is very special. For me, at the end of the day, I just bought the horse, but they've invited me along for everything. Anything that I could or would show up for, they want me to come along.”

Stidham concurs, glowing about his experience working for Empyrean.

“I've got to say that Patrick and his partners, Larry and Susan Salustro, they have been so supportive and patient with everything that we've told them,” the trainer said. “Sometimes in this business, there are going to be problems with horses and some people handle the bad news better than others and Patrick has never, ever questioned anything that we've told him. He's been 100% supportive behind me and Hilary in everything we've said, so you love to see those people who make our job easier do well. It's really rewarding to see. They're good people and they've really been good to us.”

Over the past 2 1/2 years, Empyrean has fielded offers from other owners looking to buy into Zipessa, but has always had the same answer: thanks, but no thanks.

“There were inquiries after she broke her maiden and we thought about it there, but she went on and did well at Del Mar,” Gallagher said. “There were more after her allowance at Fair Grounds and the Penny, but she's been so much fun and we invested a lot in her, not just in money and time. It kind of felt like she was part of the family at that point. We wanted to continue to keep the faith in her and she's rewarded us. She's been special.”

Now, as Empyrean prepares for one last break from the gate Nov. 4 at Del Mar, it starts to prepare for life after Zipessa. And what better place to try to recreate her magic than where it all started?

“It's been a fabulous ride,” Gallagher said. “We'll be at the October sale again, and we'll certainly have our eye out.”