Home » Archive » Shared News » For Buyers of Zayat Horses, What is the Law?

For Buyers of Zayat Horses, What is the Law? 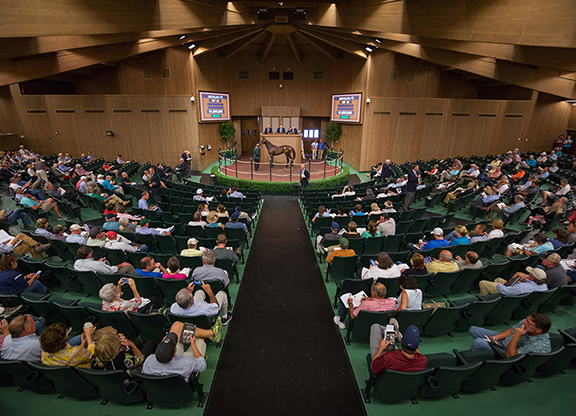 The Zayat Suit Has Raised Questions for Buyers | Keeneland Photo

When the MGG Investment Group filed a complaint in Fayette Circuit Court on Tuesday seeking the return of horses previously owned by Zayat Stables which had been sold privately and at public auction, it raised the question: is it the responsibility of a buyer at auction or a sales company to run a search prior to the transaction to determine if the horse is being sold free of liens and encumbrances? And are private buyers of horses required to do so?

In short: might the buyers of those horses at public auction and elsewhere be required to give them back?

The short answer, at least, appears to be “no,” according to Frank Becker, an attorney in Lexington, Kentucky specializing in equine law whose clients include the Thoroughbred Daily News.

Becker’s book, Equine Law, is a comprehensive legal treatise on law as it relates to the horse and the horse industry, including purchases and sales.

“I believe that MGG’s claims, which are based on state law, have been pre-empted by federal law and I don’t see how they can prevail on this,” said Becker, who taught this subject for years as an adjunct professor at the University of Kentucky Law School, where he graduated first in his class.

“If the state courts of Kentucky agree with MGG, some bankers might be happy, but it would wreak havoc in the horse industry in Kentucky,” he said.

It starts with the Uniform Commercial Code Provisions. Whether a buyer takes a purchase free of security interest under state law is governed by the UCC in effect in the relevant state. In Kentucky, UCC§ 9-315(a) provides that except as otherwise provided, a security interest or agricultural lien does continue notwithstanding a sale, and that the security interest attaches to any identifiable proceeds of collateral.

This would seem to indicate that if a buyer bought a mare with a lien, whether unknowing or not, the security interest comes along with it, and any identifiable proceeds, such as the sale of a future foal, are also subject to that lien.

However, UCC § 9-320(a) reads:
“Except as provided in subsection (e) and notwithstanding any other provision of Federal, State, or local law, a buyer in ordinary course of business, other than a person engaged in farming operations, takes free of a security interest created by the buyer’s seller.”

This rule is sometimes called “the Keeneland rule” because the sales company recognized that it would make auctions untenable, fought to get it included, and won.

But while the Keeneland rule doesn’t apply to foreclosure auctions or to private sales, at least purchasers of horses at public auction were protected. But only in Kentucky.

But what about private buyers? “They were left hanging,” says Becker.

However, he writes in Equine Law, “the United States Congress decided to get involved in the issues concerning the rights of buyers of farm products free and clear of security interest by including `clear title’ provisions in the Federal Food Security Act of 1985. Essentially, the Food Security Act provides that a purchaser of farm product collateral takes free of a security interest unless the secured party has observed certain conditions.”

The conditions are: if the secured party (MGG in this case) has provided notice to the buyer. This notice comes with specific formal requirements. The second provision is if the lender has filed what is called an “effective financing statement” in a “central filing” system certified by the USDA.

So, if the lender complied with these, filing an effective financing statement in a central filing system certified by the USDA, the horses would be sold with the security attached.

Except, says Becker, this system has only been enacted in 13 states. Kentucky is not one of them.

“So right now,” Becker concludes, “the Food Security Act likely kills this case for horses purchased in Kentucky and most other states.”

People buying these horses at public auction are protected by the Keeneland rule, and, says Becker, “you can make a strong argument that the Food Security Act protects the people who bought the assets privately.”

Friday, Ashford Stud, the Kentucky arm of Coolmore, issued a statement in response to MGG’s claims of misdealings with regard to the assets. The statement read:
‘We are astounded by the claims made by MGG Investment Group as reported in the TDN of Thursday February 13th. Breeding Rights in the stallion American Pharoah were purchased at arm’s length and in good faith by a number of purchasers from members of the Zayat family. No liens of record related to those sellers existed. In the case of Orpendale, this entity in fact had a superior right to purchase those breeding rights pursuant to a contract which predated any involvement by MGG. At no time did MGG notify Ashford Stud of any interest or claim it might have relating to American Pharoah. Any suggestion of impropriety is totally untrue and we are treating this matter as a Malicious Prosecution and will hold those responsible to account in full.”