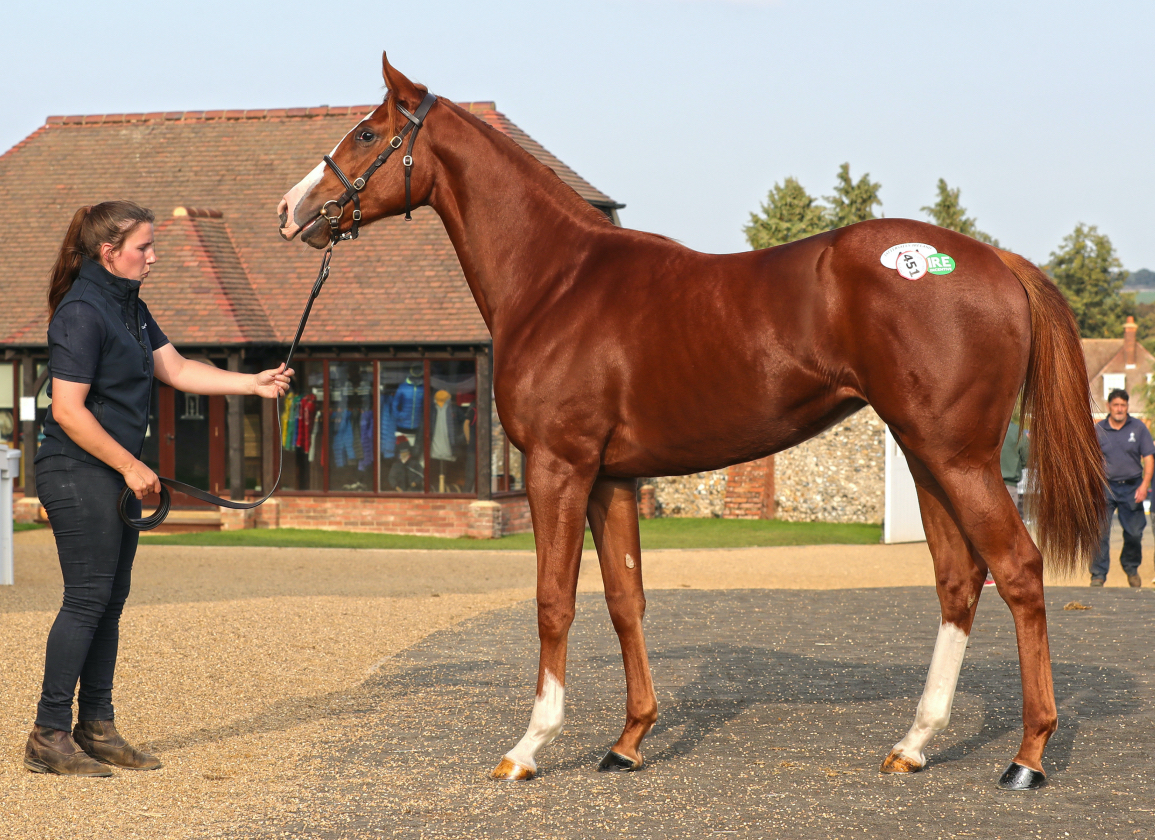 NEWMARKET, UK–With an outstanding day of action anticipated at Newmarket on Saturday, an Exceed And Excel (Aus) half-sister to one of the potential stars of the day, Zain Claudette (Ire) (No Nay Never), added further lustre to the family when topping the Tattersalls Ireland September Yearling Sale at £200,000.

Zain Claudette has been a break-out performer for trainer Ismael Mohammed this season, progressing from winning a Newmarket maiden to the G3 Princess Margaret S. and then G2 Lowther S. Come the weekend, she may well have taken the next step to become a Group 1 winner. Either way, her year-younger sibling can be viewed as being a value purchase, even as the most expensive yearling to stroll through the ring at Tattersalls over the last two days.

It was no surprise to see Mohammed perched in the top of the bidders' section and making a determined effort to sign up the chestnut filly from Castlehyde Stud on behalf of Zain Claudette's owner Saeed H Altayer.

“He was very keen to buy her,” said the trainer, who reported that his stable star is in good order ahead of her start in the G1 Juddmonte Cheveley Park S on Saturday. “She is improving with every race,” he added. “She worked on Monday and worked really well.”

“It's good to have a top lot,” Paddy Fleming of Castlehyde Stud had said on Tuesday and he was surely repeating himself on Wednesday when his draft was again responsible for day's top yearling (lot 451).

Zain Claudette had herself been purchased for £20,000 at the Goffs UK Premier Sale last year and, as a first foal, she has helped her dam Claudette (Speightstown) to get off to the perfect start in her stud career, thus ensuring that her second foal, bred in partnership by Andriy and Andrew Milovanov with V Troyan, would make exactly ten times that price. Though not earning black type herself in her four wins, the 8-year-old Claudette is a daughter of the GIII Martha Washington S. winner Tippity Witch (Affirmed), while her grandam Senora Tippy (El Gran Senor) was a listed winner in France before being Grade II-placed in the States. Among Senora Tippy's eight winning offspring is also the prolific Senor Benny (Benny The Dip), whose 10 victories included the listed Abergwaun S.

Claudette is one of 16 mares kept in Ireland by Andriy Milovanov, the president of the Ukraine Equestrian Federation. He indicated that the mare is now in foal to Ten Sovereigns (Ire) and is likely to head back to his sire No Nay Never next season.

Day one at Park Paddocks had been an uplifting one for many participants in the September Sale, and similar comments apply to the second and final day of trade. A second-day clearance rate of 91% led to an overall figure for the sale of 90%, up six points on last year and continuing a a trend of apparently strong demand in the middle market. The average on Wednesday was £28,720 (+57%) and the median was £22,000 (+50%).

It was a case of Johnston to Johnston in the sale of one of the day's leading lots (293), a colt from the first crop of Starfield Stud's Smooth Daddy.

Mullingar-based breeder Christopher Johnston was responsible for the colt out of the unraced Magician (Ire) mare Silesie, who was sold by Kildallan Stud for £120,000 to Charlie Johnston, assistant trainer to his father Mark.

A son of the late Scat Daddy, Smooth Daddy covered 74 mares in his first crop in Ireland at a fee of €5,000, and in the case of this particular family it is a sireline which has already been deployed to good effect through Silesie's half-sister Surfside Tiara, a stakes-winning daughter of Scat Daddy. The family also includes Coolmore's young American-based sire and dual Group 1 winner Air Force Blue.

Dermot Kilmartin, who consigned the colt through his Kildallan Farm said, “He has been very straightforward since the day he came in for prep and this is an absolutely super result. Christopher was watching online and is over the moon.

“Over the last couple of days he has been very busy. I knew there were people on him, but I didn't think he 'd make that kind of money. Fingers crossed he goes on to do well on the track.”

Charlie Johnston, who had to outbid brothers Sean and Dwayne Woods for the colt, added, “He's a cracking individual. Obviously that was a lot more than I thought he would make, but he was a real standout.

“This is the first one I've seen by the sire, but Micheal [Orlandi, of Starfield Stud] used to work for us many moons ago, so we know him well and it is a great start for his stallion.”

Sitting together on the stairs late in the session, agent Billy Jackson-Stops and trainer George Scott went to £105,000 to secure a colt by one of the hottest young stallions in Europe, Mehmas (Ire). Bred and consigned by Tally-Ho Stud, where the leading second-crop sire stands, lot 482 is a son of three-time winner Drifting Spirit (Ire) (Clodovil {Ire}) from the further family of G1 Falmouth S. winner Nahoodh (Ire), who is also by Clodovil.

Topping the list of consignors with an average of £92,500 was the Dreeling family's Coole House Farm, which was represented by only two yearlings at the sale and sold one each day for £90,000 and £95,000 respectively. The latter, lot 435, a son of the venerable Footstepsinthesand (GB), was bought by MV Magnier through agent Ed Sackville and is the first foal of Caped Lady (Ire) (Cape Cross {Ire}).

A delighted Mark Dreeling explained, “My wife Barbara and I set a plan about five years ago to try to get a Cape Cross mare. Everybody has their preferences in a mare but we personally don't like very big mares and Cape Cross has a tendency to throw a big mare so it took us seven years to find one.”

He added, “We went to the sales to see [Caped Lady] specifically and spent 10 seconds looking at her. I was busy with breakers at home and couldn't go back to the sale when the mare sold on Monday so I said to Barbara, 'You have one job, don't go near that stable door, don't do anything, just arrive in the morning, go to the ring and don't come home without her.” So it is all down to Barbara.”

Caped Lady currently has a Bated Breath (GB) foal on the ground and is in foal to Ten Sovereigns.

Dreeling continued, “We couldn't be happier; it's worth it when you get a day like this. We had two wonderful foals from two beautiful mares. It has been a hard year for Barbara and myself, we have both had health issues. It's been rough, but we are here and the focus was to get these two here to the sales and for me to be better to be with them.”

He added, “My daughter Megan is here with the horses, but my other daughter Julia is at home and she is the one who runs the office and takes care of all the administration. Julia and I go through the stallions and she sorts the mating plans with me, she is fundamental to what we do.”

Starspangledbanner (Aus) proved to be one of the most popular sires at the sale, with 15 of his yearlings selling for an average of £42,667. During the final session,

The same price was given by Ross Doyle for lot 475 from Ballyvolane Stud. Bred by Carrigbeg Stud and David Powell, the late April filly is out of the Averti (Ire) mare Divert (Ire), who is already the dam of eight winners from nine runners, including the listed-placed Reroute (Ire) (Acclamation {GB}).

Among the stallions making their yearling sales debut this year, Zoustar (Aus) was represented by two lots who returned an average of £56,000, while Smooth Daddy, helped by the six-figure colt, set an average of £52,333 for three sold.

Four Havana Grey (GB) yearlings sold for an average of £40,000, while the quintet by Gustav Klimt (Ire) brought £32,800. Sioux Nation had the largest representation of the freshman brigade and his 11 sold fetched an average price of £27,901, while Kessaar (Ire) had eight sell for an average of £29,325.

A further 91 yearlings constituting Part II of the September Sale were offered during the evening for an aggregate of £575,897/€676,561.

Heading this final session was lot 521, a colt by War Command who was bought for £36,000 by Demi O'Byrne and Sean Grassick.

Via telephone en route to catching his flight home, Grassick confirmed that the Croom House Stud-consigned colt will also head back home to Ireland to be trained. A half-brother to two winners, he is out of the Refuse To Bend (Ire) mare Peig (Ire), herself closely related to the GI Gulfstream Park Breeders' Cup H. winner and stallion Subtle Power (Ire) (Sadler's Wells).