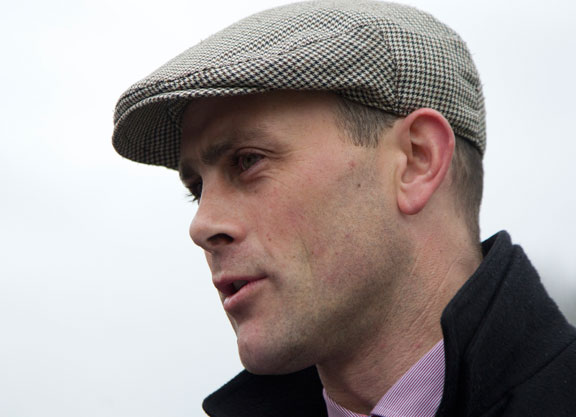 Make no mistake, being a racehorse trainer is one of the most challenging professions in sport. It would be difficult enough if their sole responsibility was conditioning such notoriously fragile animals to perform at their best, but being a trainer involves so much more than that. A trainer that isn't fortunate enough to have the benefit of support staff often has to play the role of accountant, human resource manager, therapist, salesperson and social butterfly amongst others. Not to mention being a grief counsellor after the regular defeats and setbacks that make up so much of the game.

The profession is full of talented horseman that never quite make the breakthrough due to shortcomings in their abilities to play those other roles, but even amongst those that do make a success of their training careers, making the next leap forward to regularly compete at Group 1 level is another thing entirely. There is only so much top-class bloodstock to go around and the reality is that the majority is held in the hands of a small number of powerful owners and breeders that aren't inclined to spread their equine wealth to trainers that aren't proven at the highest levels. Thus, when young trainers that have started from scratch make that breakthrough, it is worthy of the highest praise. Right now in various corners of Europe, there are a number of trainers that are doing just that and their performances deserve to be celebrated.

It is hard to believe that David O'Meara only took out his trainer's license as recently as 2010 and since then he has established himself as the most rapidly-progressive trainer in Britain. Remarkably, he broke into the top 10 UK trainers based on winners in just his fourth season as a trainer in 2013. Even more impressively, he broke into the top 10 based on prize money in 2014. What makes his achievements all the more commendable is that he has “done it the hard way” with many of his horses being second-hand performers picked up from other trainers. His ability to improve such horses has been a feature of his career to date, with the obvious highlights being him winning Group 1 races with four such individuals in G Force (Ire) (Tamayuz {GB}), Move In Time (GB) (Monsieur Bond {Ire}), Amazing Maria (Ire) (Mastercraftsman {Ire}) and Mondialiste (Ire) (Galileo {Ire}).

With his success having been rewarded with increased patronage from powerful connections who are sending him well-bred and untried horses, O'Meara is currently on the verge of entering a new phase of his training career. He took the brave decision to move into a new purpose-built yard outside York at the beginning of 2016 to better facilitate his growth and that move promises to help him make that next step forward. While trainers are generally expected to take some time to learn their new gallops and adjust their training regimes accordingly, O'Meara is unlikely to be waiting too long before adding to his Group 1 tally.

Hugo Palmer only had a little over a fifth the number of runners that David O'Meara had in 2015, but he broke the £1m prize-money barrier and is well on his way to taking another notable leap forward in his rapid progression as a trainer in what is just his sixth season as a license holder in 2016. What is most notable about Palmer's trainer career to date is the high level of success he has enjoyed from relatively small numbers of runners. In the five years he has been training he has sent out just over 100 winners, but amongst that number are seven individual group winners. Most notable amongst them are two Classic winners in the shape of last year's G1 Darley Irish Oaks heroine Covert Love (Ire) (Azamour {Ire}) and this year's G1 Tattersalls 2000 Guineas winner Galileo Gold (GB) (Paco Boy {Ire}). With his string having quickly grown to 140 horses thanks to the patronage of some of the most high-profile owners in the sport, Hugo Palmer is likely to soon have both quality and quantity on his side in his rise up the training ranks. It is only likely to be a matter of time before he breaks into the top 10 trainers in Great Britain.

For a 27-year-old that has sent out just 34 winners during his four-year career, there haven't been too many trainers that have attracted more attention in the early part of their careers than Curragh-based Michael O'Callaghan. Perhaps the biggest factor behind why his reputation has risen so quickly is that from the very outset of his career O'Callaghan sent out multitudes of winners in what is an exceptionally competitive arena, Irish 2-year-old races. Even more notable is that he did so mostly with horses he had bought himself at the yearling or breeze-up sales.

It was in 2015 that O'Callaghan really shot to prominence by saddling three 2-year-olds that won maidens prior to competing at stakes level, most notably Blue De Vega (Ger) (Lope de Vega {Ire}), who won the G3 Killavullan S. at Leopardstown, and Now Or Never (Ire) (Bushranger {Ire}), who finished second in the G2 Futurity S. at The Curragh. Those pieces of form made both of them potential Classic contenders and O'Callaghan duly delivered them to The Curragh to finish third in the G1 Irish 2000 Guineas and the G1 Irish 1000 Guineas, respectively, last month. With his string having grown to 60 from just 25 this time last year and with the support of high-profile owners such as Qatar Racing, Pearl Bloodstock and Sheikh Mohammed Bin Khalifa Al Maktoum, O'Callaghan's rapid rise up the Irish training ranks looks set to continue.

Adrian Keatley may have provided one of the best big-race underdog stories in recent years when saddling Jet Setting (Ire) (Fast Company {Ire}) to win the G1 Tattersalls Irish 1000 Guineas last month, but he had already been gaining plenty of plaudits prior to that as he quietly moved up the training ranks.

Having taken out his trainer's license as recently as June 2014, Keatley is the newest member of his profession mentioned in this piece. He has plied much of his trade at the lower levels of the sport thus far, but had quickly gained a reputation as one that could improve horses from other trainers and wasn't afraid to travel abroad to give his horses the best chance of winning.

As competent as he had shown himself to be, no one could have anticipated just how well Keatley would do with Jet Setting after she was sent to him having been bought out of Richard Hannon's yard for just 12,000gns as a four-race 2-year-old maiden last October. In just five starts for him she won a maiden and a Group 3 prior to her never-to-be-forgotten victory in the Irish 1000 Guineas at The Curragh. It is incredibly difficult to win a Classic in Ireland and prior to Jet Setting's victory the only active Irish-based trainers that had saddled the winner of one of the five Irish Classics were Aidan O'Brien, Dermot Weld, Jim Bolger, Kevin Prendergast, David Wachman, John Oxx, Tommy Stack and Michael Cunningham.

While his stable star Jet Setting may have run her last race for Keatley with her set to be offered at the Goffs London Sale later this month, he has another exciting inmate to go to war with in the shape of the former Group 1 winner G Force, who has been sent to him having been found to be infertile as a stallion.

Regardless of how he fares with G Force, Adrian Keatley is most certainly a trainer on the rise in Ireland.

A graduate of the Darley Flying Start that served as an assistant trainer to Alain de Royer-Dupre, Chantilly-based Francis-Henri Graffard may only be in his fifth season as a trainer, but he has already risen right up the French training ranks. Indeed, he had the best year of his young career in 2015, finishing seventh on the French trainers' table based on prize money, with over €1.9 million from 58 winners. One of the features of his career thus far has been his ability to attract top-class owners. Qatar Racing, Al Shaqab Racing and the Niarchos Family all have multiple horses with him and it was from the last-named source that his stable star Erupt (Ire) (Dubawi {Ire}) came from. The 4-year-old quickly progressed into a high-class middle-distance performer last season, giving Graffard his first Group 1 victory in the Grand Prix De Paris at Longchamp. With him having significant firepower at his disposal courtesy of those three owners amongst others, Francis Graffard's progress up the ranks of French trainers seems unlikely to halt anytime soon.