Young Primed for Another Big Saturday 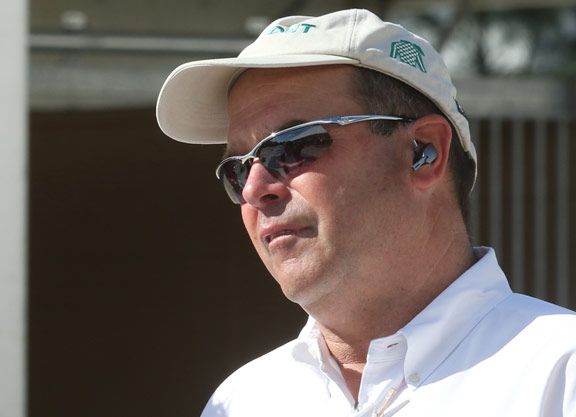 SARATOGA SPRINGS, New York–Aside from trainers and jockeys, there are not many people in racing who can say they are connected to four Grade I contenders on a single day. However, on Saturday, bloodstock agent Steve Young will be able to say just that as four horses he has purchased compete on Saratoga's blockbuster GI Travers S. day card.

Leading the quartet is the horse that recently provided Young with his career high, GI Kentucky Derby hero Always Dreaming (Bodemeister), who will take on a fully-loaded field, including the other two Triple Crown race winners, in the Travers.

Young selected the dark bay for $350,000 as a Keeneland September yearling, but his connection to the colt goes back much further than that.

“I looked at his dam's babies just about every year. Above Perfection (In Excess {Ire}) was a very, very good horse in California,” said Young, a former trainer who raced in California for over 13 years. “She was a horse that could fly. The day that she caught my attention was the day she hooked with Xtra Heat and they ran :21 4/5, :44 3/5, :56, 1:08 1/5 all the way to the wire. You know a filly that could run like that was capable of throwing you anything.”

The Illinois native continued, “I looked at her babies and never got one bought, but this horse was from the first crop of Bodemeister and I love In Excess mares. I also loved [his half-sister GISW] Hot Dixie Chick (Dixie Union). He has tremendous balance and tremendous movement about him.”

Always Dreaming is from the first crop of his young sire and was produced by an older mare. These two factors are a deterrent for some buyers, but did not bother Young.

“In Excess mares are unbelievable,” Young said. “The one thing I do that some people don't is I've had a lot of luck buying out of a tick older mares than some people will buy. Trappe Shot is also out of an older mare, as is Malagacy.”

As for the freshman sire aspect, Young said, “In the last 15 years, first crop sires are very popular. They are a bit hard to appraise because you don't know how the market is going to perceive them. There was a buzz about Bode. He ran one of the best losing Derbys ever.”

Always Dreaming captured this year's GI Xpressbet.com Florida Derby, making him Young's second Florida Derby winner in the past three years, following 2015 victor Materiality (Afleet Alex). He scored an impressive victory in the mud on the First Saturday in May (video), giving Young not only his first Derby winner, but his first Triple Crown race winner.

“I'm not a big self analyzing, Twitter type of person, so it was one of those things that at the time, I don't think it fully sunk in,” said Young, who tends to keep to himself when working the sales or observing from the paddock with Joanne Wiegand-Daw, preferring to let the horses do the talking. “It's what everyone gets up seven days a week to try to do. I had a lot of people that helped me get there. It was very cool.”

Another buzz horse on Young's list of Travers day runners is undefeated “TDN Rising Star” Coal Front (Stay Thirsty). Winner of the GII Amsterdam S. last time July 29 (video), the Todd Pletcher pupil will be one of the likely favorites in the GI H. Allen Jerkens S. (formerly known as the King's Bishop).

“He was a get the shank horse that day,” Young said. “I bought him for Mr. [Robert] LaPenta, who is a great owner and deserves this. He had Stay Thirsty, sold him and this is his way back. The horse was probably the best 2-year-old maiden here last year. He worked :58 and change out of the gate and got hurt. He made it back through the effort of many people. I can't like a horse more than I like him.”

He added, “We've done good with the family. It's a great fast family, goes back to Madame Lagonza, who didn't make the races, but could fly. It's a family of hidden quality, a very good family. Part of me is very happy and grateful that the horse made it back because some of them don't, but if he hadn't got hurt, who knows what would have happened. Hopefully, he has his chance now.”

Young will also be represented by a private purchase Saturday in GI Ballerina S. contender Paulassilverlining (Ghostzapper). The New York-based agent purchased the mare for Juddmonte Farms, who transferred her to Chad Brown, and she is a perfect three-for-three since, with hard fought victories in the GI Madison S., GI Humana Distaff and most recently the July 26 GII Honorable Miss H.

“Garrett O'Rourke talked to me last year about buying some fillies with racetrack quality and pedigree to race for Juddmonte and go to Arrogate (Unbridled's Song) when they are done running,” Young explained. “Paula was the first one we bought together. Since we bought her she won three races and she is everything good about a racehorse. She comes off the turn with bad intentions. She knows where the wire is and fortunately she has gotten there in all of our races. There are four Grade I races for female sprinters and she has won the first two. If you take her with her desire and put it with Arrogate and his desire and his ability, it will be pretty explosive to see what she throws.”

Last, but certainly not least, in Young's Traver's day line up is Waterford Stable homebred Going For Broke (Blame), who is scheduled to run in the GI Personal Ensign S. He purchased her dam Support the Cause (Put It Back) privately for Tom and Judy Moore's operation and arranged her breeding to Blame.

“She is an interesting story,” Young said. “We were the underbidder on her dam here as a Saratoga yearling with Glen Hill Farm buying her. She was a full-sister to In Summation, who was a very good horse that Waterford raced. We checked on her a few times during her career. She did not make the races and we bought her privately in foal to Scat Daddy. We bred her to Arch and then Blame and this is the result. She is a gorgeous filly and probably has a big second career ahead of her after she retires.”

Going For Broke scored three times last year before finishing second to two-time champion Songbird (Medaglia d'Oro) in this venue's GI Alabama S. just over a year ago. Off the board in the GI Beldame S., she was third in the GIII Comely S. Nov. 26 and has made just one prior start this term, completing the exacta behind GISW “TDN Rising Star” Carina Mia (Malibu Moon) in this venue's Shine Again S. Aug. 2. Going for Broke will face off with Songbird yet again Saturday.

“If Going for Broke could do good this weekend, it not only helps her, but a rising tide carries all boats, it takes her dam, her sister, all of them to a different level,” Young said.

He also privately purchased the favorite for Friday's $250,000 Albany S., Twisted Tom (Creative Cause), who won a pair of stakes in Maryland earlier this term and captured the New York Derby July 22.

Young trained horses for 23 years–conditioning the likes of GI Wood Memorial S. hero Irgun, as well as Beveled, Fieldy (Ire) and Birdie's Legend–before shutting down his stable in 2005 and got his start in the bloodstock game when asked to buy some horses for Darley's Sheikh Mohammed.

“I had stopped training horses in 2005 and had the opportunity through John Ferguson and Kiaran McLaughlin to buy a couple of horses for Sheikh Mohammed, one of them being [MGSW & MGISP] Diabolical,” Young said. “That progressed into pinhooking [MGISW sire] Zensational with Walker and Alison Hancock and from there we were on our way.”

There are not many big race days that go by where Young does not have a runner and often a winner. With the team he has assembled Saturday, it will be no surprise to see him reach another top achievement during what may be his best year yet.