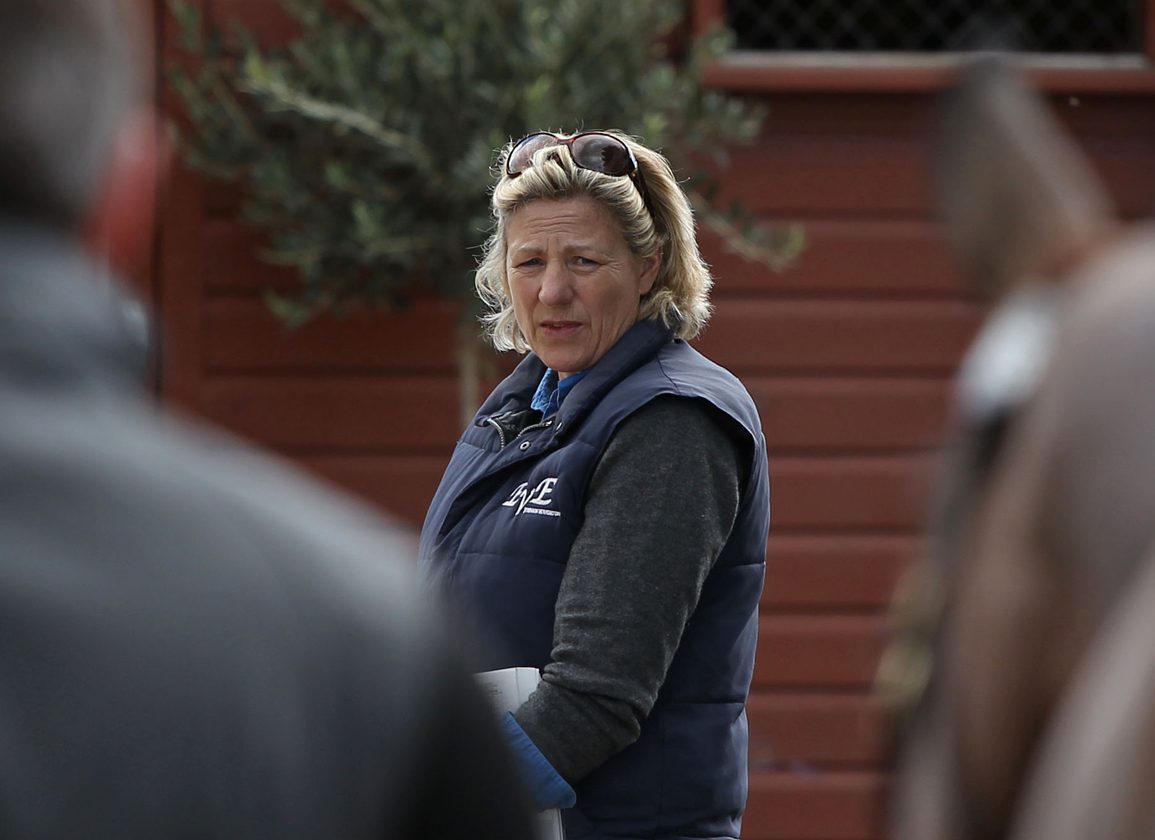 By her own admission, Eve Johnson Houghton does not have unlimited resources to tap into at the yearling sales, which makes her successes in recent seasons all the more impressive.
The trainer sent out 10,000gns purchase Chipotle (GB) (Havana Gold {Ire}) to win the Windsor Castle S. at Royal Ascot last season and, proving that result was no fluke, bagged the lucrative Tattersalls-sponsored sales race at the Curragh on Sunday with another cheaply-bought son of Havana Gold, the unbeaten Streets Of Gold (Ire).
With the help of Anthony Bromley of Highflyer Bloodstock, Johnson has unearthed some serious value from the yearling sales in recent seasons, with the £27,000 purchase Streets Of Gold the latest example of that.
Along with revealing her approach to the yearling sales, Johnson Houghton provides an insight into what it takes to run a busy racing yard and how she continues to find her way into the winner's enclosure despite operating to a strict budget in this week's Q&A.

Brian Sheerin: You've had great success with your 2-year-olds in recent seasons. Chipotle flew the flag for the stable last year and now Streets Of Gold, another son of Havana Gold, has put the stable in lights. What is your approach to the yearling sales?
Eve Johnson Houghton: I do the sales with Anthony Bromley. My father goes through the pedigrees as well. We look at most of the horses at the sales and there are a few things we don't like. For example, I don't like a mare who has never produced anything, however good-looking the horse is. I don't mind an unraced mare or even a first foal. It has got to be a good physical and I don't mind buying yearlings by what the market perceives to be an out of fashion stallion. As long as the stats are okay on the stallion, I don't mind that. Anthony looks at all the horses and he comes up with a shortlist. He now knows what I don't like–it has taken us a few years to figure out what we like and what we don't like. I'll look at the horses on the list and we'll go from there.

BS: There would have been plenty of people describing Havana Gold as being out of fashion but along came Chipotle and Streets Of Gold.
EJH: They don't tend to be very big, which is why they don't make a lot of money, but that doesn't bother me. They are big enough if they are good enough–as long as they have plenty of bone and something about them.

BS: And what was it that you liked about Streets Of Gold at the sales?
EJH: He was just a very nice horse. Looking back at my catalogue, I said, 'very bonny, looks like Chipotle and a good-walker.' He had open knees, but they were always going to close.

BS: Temperament-wise, he seems to be almost horizontal he's so laid back.
EJH: All he does is eat and sleep. He shows us nothing at home. I think the travelling took a bit out of him, to be honest, although it is hard to tell, because all he does is sleep and eat; although he is sleeping more than normal. He hasn't been ridden since the Curragh but we'll get him ridden out tomorrow [Friday] and see how he is.

BS: He's earned a supplementation into a good 2-year-old race. Have you anything in mind?
EJH: There are loads of options. We'll have to have a talk about it but we don't know yet.

BS: You have enjoyed success on Irish Champions Weekend before when Ice Age (Ire) (Frozen Power {Ire}) landed the Bold Lad but how much of a kick did Sunday's win give you?
EJH: Brilliant. It was great. It's good to have a plan but even better when it pays off.

BS: Nobody could accuse you of not placing your horses well. The stats would back that up as you're on course for another good season with 38 winners on the board.
EJH: We try. I don't have the best bred horses and I don't have the most expensive horses. Unfortunately, my owners–wonderful as they are–don't have deep pockets. But, I try to do the best I can with every horse that's sent to me. It's important to me that I put them in the race where they have the best possible chance of success.

BS: By your own admission, you are operating on a budget at the sales but you have continued to come up trumps.
EJH: Going back to buying them, Anthony and I work well together. It's a big team effort in buying the horses and then it's a big team effort in getting them ready for the races here. I've got great staff who back me up and we have long conversations about where we are going and what we are doing. Ultimately, it's down to me.

BS: The 2-year-olds have made up 14 of your winners this season. I'm presuming that a lot of those would have been bought on spec as yearlings.
EJH: That's why I am operating on a limited budget, because I don't buy anything that I can't pay for if I can't get it sold. I couldn't go out and buy a 200 grand horse without an owner backing me to do that. I know, pretty much, which owners of mine are going to come back in for another go every season and what horses will suit them. But I don't tend to get big orders before the sales so, when I am buying one, it tends to be a bit hit and hope with regards to getting them sold. To be fair, we have a yearling parade every year and we tend to get everything sold by then.

BS: On the track, things are going great, but off it, how is the financial landscape looking for trainers in Britain in the face of rising costs?
EJH: I run a very tight ship. Always have done. We have very tight margins but you have to run it as a business. A lot of the problem is that some trainers don't run it as a business. Not only do we have to source the horses, train them and find the right races, but we also have to run a business. There are only so many hours in the day and one of the balls can get dropped somewhere along the line. If you don't have a business, you can't train a horse. I was very lucky that I did a business course before ever starting in the training ranks. I also worked in a trainer's office. I know what I am looking for and know how to do it. I keep a very strong eye on what goes in and out of my bank account.

BS: And I am sure there is a temptation to stick your neck out and stretch the budget when you really like one at the sales?
EJH: You need restraint but, occasionally, there are times when you say, 'I'm not going home without that one.' Also, there are times when I say to Anthony, 'if you have another bid, that's your horse.' It's about knowing what to stick your neck out for and what not to.

BS: What would your average spend be at the sales?
EJH: I would suppose it would be 20 or 30 thousand. The most expensive horse I have bought on spec cost me £45,000.

BS: Chipotle for £10,000 and Streets Of Gold for £27,000 are huge results and prove that it can be done on a budget.
EJH: I am quietly proud of myself that I do run a tight ship and that we do seek out the odd diamond in the rough. There are some that don't make the grade and, as I say to my owners, 'you have to kiss a lot of frogs before you find your prince.' You can think that you will always buy a nice horse because there will be some bad ones along the way. You have to be realistic.

BS: With regards selling them, I am sure there is a commercial element to your operation, as Chipotle was sold at the end of his 2-year-old campaign for 210,000.
EJH: Well that was different. When Covid hit and I thought that I wasn't going to get any orders, I set up a syndicate specifically for 2-year-olds, all of which would be sold at the end of the season. So, I was going to buy three 2-year-olds, all for not a lot of money, with 20 people in at 5% each for an all-in fee. The theory was that we might get one half-decent horse, one who was absolutely useless and one who might go lame on us. Chipotle happened to be better than half-decent but one got a fracture and the other was no good. That's how it worked. We went in again this year and two have worked out all right, they've won their races without being superstars, and the other is not very fast and is now playing Polo. If you spread your risk, and one comes along, it might carry the whole thing and people can then go in again the following year.

BS: Have you already begun your study for next week's September Yearling Sale at Tattersalls?
EJH: As I said, my Dad goes through the pedigrees and highlights things that he likes. Anthony and I will go through it independently and then we'll go and look at the physicals. There will be certain horses that we won't bother looking at but, once we've found the physicals, we'll look at the pedigree in more detail and decide what it's worth to us.

BS: And you were active at the Somerville. A lot of people have reported the market to be really strong but you are managing to get things bought?
EJH: It's pretty strong. I got two that I really wanted and the others I liked. I put a price on them and they came within that price range so I bought them.

BS: We're obviously going through a period of inflation but, by all accounts, you will continue to operate within the budgets you set yourself.
EJH: Until I have an owner come to me and say they want a horse for x amount of money, I can't afford to spend more than what I am spending on the horses I am buying on spec. I won't be drawn into debt.