You Can’t Choose Your Family, Unless You’re Hunter O’Riley 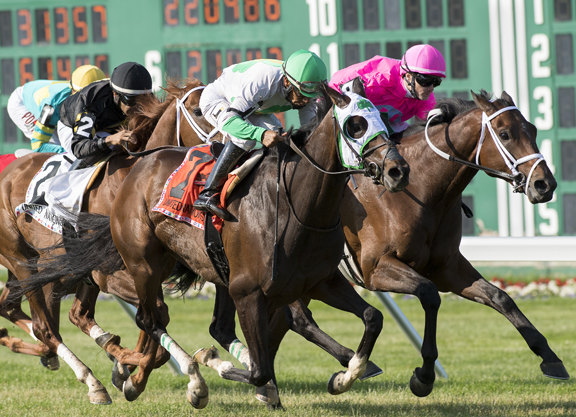 Hunter O’Riley (Tiz Wonderful) last saw the starting gate just over a year ago. Some may remember him blowing up their ticket that day, as it was when he snuck up from the outside to win the GI United Nations S. at odds of 14-1, beating the likes of eventual GI Pegasus World Cup Turf S. winner Zulu Alpha (Street Cry {Ire}), as well as the near-millionaire graded stakes-winning Channel Cat (English Channel).

Co-owner Mike Ryan has had his share of pinnacle moments in racing as the bloodstock agent for multiple Breeders’ Cup champions, most recently Structor (Palace Malice) and Bricks and Mortar (Giant’s Causeway). But he said he remembers watching that race at Monmouth like it was yesterday.

“It was one of my greatest thrills in racing,” he said. “We were on vacation at the beach, and I remember sitting in the living room. When Hunter started to make his move mid-way on the turn, we all jumped out of our chairs. I couldn’t speak for two days.”

“Hunter” officially retired this year as a seven-year-old with 22 starts, two graded stakes wins, and over $620,000 in earnings. He has remained a part of the Ryan family since, now under the care of Mike Ryan’s daughters Allaire Ryan, the sales director at Lane’s End Farm, and Sarah Sutherland, also a sales director at nearby Indian Creek Farm.

“My sister and I have grown up riding,” Allaire said. “Over the years if Dad had a horse coming off the track, we would either help re-home it or keep it ourselves. I had always loved the way Hunter looked, a really cute bay with white socks and a white blaze. And I fell in love with his personality. He was the kind of horse that if you were having a bad day and you were at the track watching training, he would make your heart light up. He would always have his ears pricked and he had this big, energetic, uphill stride. He just loved to train.”

The son of Tiz Wonderful is now slowly learning the ropes of becoming an eventing horse under the care of veterinarian and equestrian Marty Whitehouse.

“Marty and I grew up riding together,” Allaire said. “Hunter is actually the third horse she has worked with of ours. She’s taking it really slow with him but, she’s excited because he’s so athletic to sit on. For her to think as highly of him as she does right now is really great because she’s brought a lot of horses along.”

While Allaire has stepped away from the eventing world, she said the thought of showing him someday isn’t far from her mind. “He’s a horse I would love to show one day, but for now my sister and I are happy being his fangirls. He’s so straightforward and would be happy to try anything. He’s one of those horses that will be in our family for life.”

Although he’s now inseparable from the Ryans, Mike originally purchased this beloved gelding as a pinhooking prospect.

“He had no early speed,” Ryan said. “But when he trained, the farther he went, the better. There was no bottom in him. You would gallop him and think you’d done enough but he would have gone another mile if you asked him. He just wasn’t fast enough for the two-year-old sales.”

From the start, Ryan said the horse loved his job.

“He was always very healthy, never sick a day in his life and just one of those horses that felt good every day,” Ryan said. “He always showed up in training. As soon as you put a saddle on him, it was always as if he had a smile on his face.”

Trained as a 2-year-old under Joe Sharp, the flashy bay broke his maiden in November of 2015 at Churchill Downs.

“I remember his dam [Oblige (Bernardini)] was in the Keeneland November Sale that year,” Ryan recalled. “Jody Huckabay [Elm Tree Farm] bought her either an hour before or an hour after the race, I can’t remember. But she was in foal to Will Take Charge, and they sold the resulting offspring for $975,000.”

As a 3-year-old, Hunter O’Riley was transferred to the barn of New York-based trainer Jimmy Toner.

“I wanted to leave him in New York because I knew he needed those extended races,” Ryan said.

While the sophomore’s connections were certain of his ability, it took time for his true talent to be seen on race day. 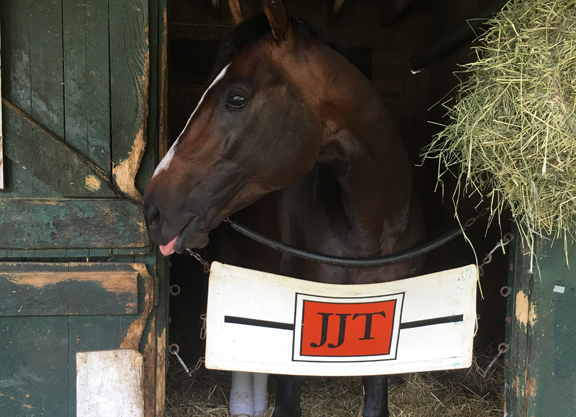 “He was a bit pace dependent,” Ryan said. “It was hard to get through to the riders that he was a bit like a bicycle. You had to keep peddling him. When he broke from the gate he would drop the bridle and canter around in a merry fashion. The problem was that most people would let him get too far back.”

Their persistence was rewarded in the summer of Hunter O’Riley’s 4-year-old season when he won the GII Bowling Green S. at Saratoga under Florent Geroux.

Ryan said, “He got a very good ride that day. There was enough pace that he was able to run them down.”

After an unplaced start in the GII Dixiana Elkhorn S. at Keeneland the next spring, the 5-year-old tore his ‘XYZ’ ligament and was given the remainder of the year off. He was sent to Niall Brennan Stables in Ocala.

“Hunter was like a family pet down there because he would usually winter there every year,” Ryan said. “They all loved him.”

Back in training as a 6-year-old, Hunter O’Riley ran unplaced in three graded stakes before he captured the Grade I victory in the United Nations S.

“We told Paco [Lopez] that you can’t let him get too far out of it,” Ryan said. “When you get him out of the gate, put him in the race and make him stay in the bridle.”

With GI status, the gelding made the trip back to Saratoga in hopes of a repeat victory in the Bowling Green S. However, a sudden injury kept him from making it to the starting gate.

“The Sunday before the race, they went into his stall and he was dead lame,” Ryan said. “He wouldn’t put his right front on the ground. It was very weird; I’d never seen anything like it. There was no cut, no puncture wound, no laceration. His X-ray and ultrasound were clean.”

Anti-inflammatory drugs brought forth no response, and the next day Ryan said he was no better. It was discovered that his white blood cell count was up, so he was sent to Rood and Riddle Equine Hospital in Saratoga, where they found an infection in the tendon sheath.

“He was at the clinic for almost three weeks,” Ryan recalled. “They flushed the sheath multiple times a day. I thought he was going to die, but Dr. Kathryn Dern and her staff did an unbelievable job. He lost a lot of weight, but he survived.” 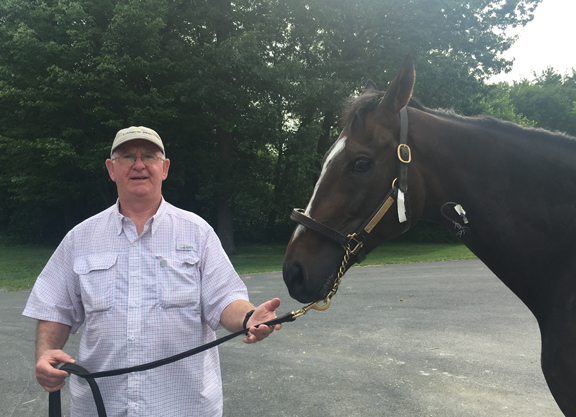 Defying the odds, Hunter O’Riley would go on to train again and even breeze back at Niall Brennan’s farm last November.

“He was doing great and was back in training when Niall noticed a little filling in that ankle joint,” Ryan said. “We could have given him another six or eight months off and tried to bring him back, but I said he was too nice of a horse. He had just turned seven, so we decided to retire him.”

That was when Allaire received the long-awaited call saying Hunter was ready for her. “The horse had stayed so dang sound that I had gotten tired of waiting and ended up getting another horse,” Allaire said with a laugh. “I told Dad I can’t have two horses at once, but I said let’s get him to Lexington and bring him home.”

While the timing may not have been perfect, there was no question that the horse would stay with the family.

“Hunter made the decision pretty easy,” Allaire said. “He’s given us so much over the years and I would say that he’s Dad’s favorite horse he’s ever owned.”

Mike Ryan hesitated when asked if this was true, citing multiple other top-level horses that have worn his silks over the years, but in the end he agreed with his daughter.

“From a personality standpoint, I would say he’s my favorite,” he conceded. “There’s something about this fellow and his personality. He’s like a kid that is always happy no matter what you ask of him. When you saw him with his head hanging out of the stall with his floppy ears, he just made you smile.”

Ryan continued, “He really would have been good as a seven-year-old because we had finally learned how to ride him. He was a trier and he was as good on dirt as he was on turf. If the turf races ever came off, we were never afraid to run because he would give you just as much effort on dirt.”

Hunter O’Riley has had no issues with his past injury since starting his new career, and he has recently been hard at work maneuvering through his first cross-rail courses.

“He’s not a horse that wants to be retired out in the field,” Allaire said. “The plan is for him to go to some schooling shows with Marty this summer and see how he takes those. If he is the upper-level horse that we think he is, we’ll keep showing. He’s not afraid of anything, but not in a reckless way, more of a confident, eager way. He just wants to make you happy.”

Her dad added, “He’ll be a fun horse for Marty and the girls. He would jump the Eiffel Tower if you asked him. He has no fear and he’s just a cool character.”