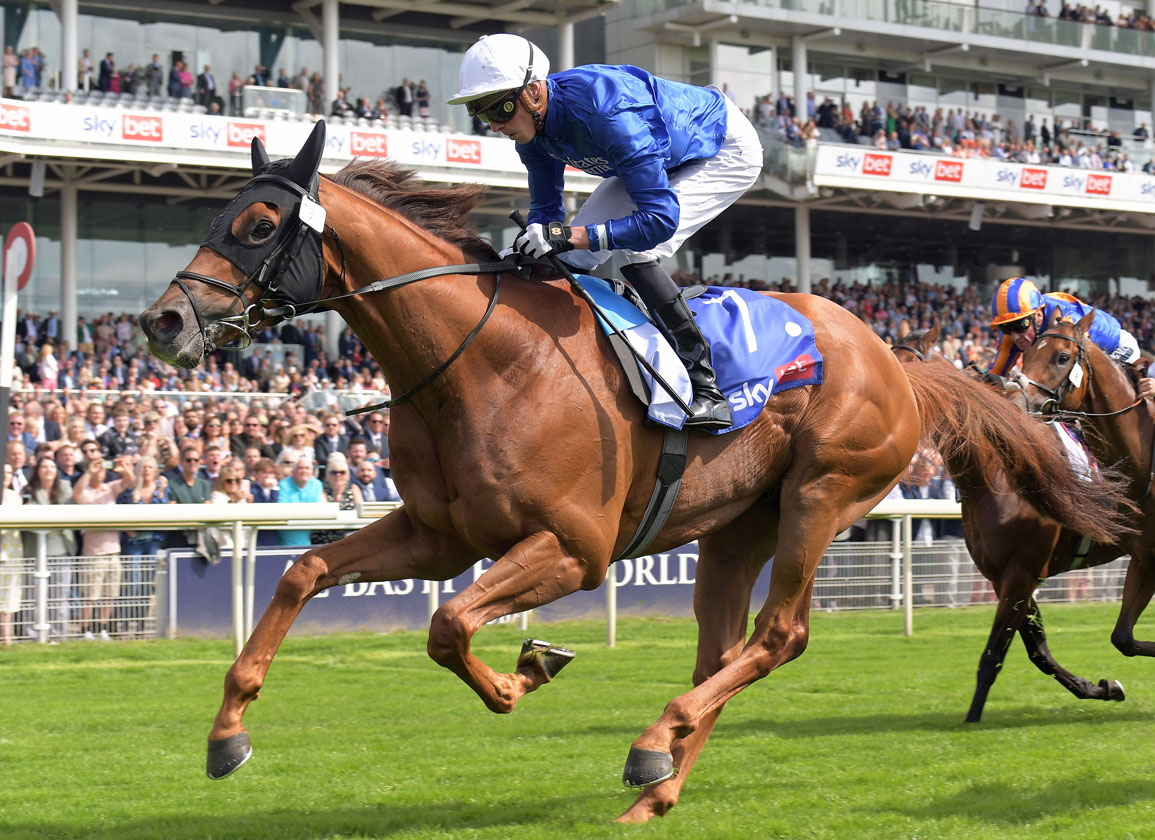 One of three overseas raiders in the field of eight, Yibir (GB) (Dubawi {Ire}) looks to ring up another big race in the Empire State for Godolphin and trainer Charlie Appleby in Saturday's $1-million Jockey Club Derby Invitational S. at Belmont, which offers the winner an all-expenses paid trip to the GI Longines Breeders' Cup Turf at Del Mar Nov. 6.

It has been something of an up-and-down season for the homebred full-brother to MG1SW Wild Illusion (GB), runner-up to Sistercharlie (Ire) (Myboycharlie {Ire}) in the 2018 GI Breeders' Cup Filly & Mare Turf at Churchill. A close third in the G3 Sandown Classic Trial Apr. 23, Yibir was a disappointing fourth in the Listed Dee S. at Chester in early May and was gelded following a runner-up effort in Goodwood's Listed Cocked Hat S. May 21. A comfortable winner of the G3 Bahrain Trophy at Newmarket July 8, he tired to beat just two home at short odds after overracing in the G3 Gordon S. back at Goodwood July 29. Fitted with a hood for the G2 Great Voltigeur S. at York last time Aug. 18, he switched off and stayed on beautifully through the long straight to record a 1 1/4-length victory in a race customarily used as a springboard to the G1 St Leger. As a gelding, Yibir was not eligible for that Classic.

Bolshoi Ballet (Ire) (Galileo {Ire}) gets a third American stamp in his passport, having overcome stretch traffic to outfinish the re-opposing Tokyo Gold (Fr) (Kendargent {Fr}) in a modestly rated renewal of the GI Belmont Derby July 10. The bay raced handier to the speed before weakening to fourth in the Aug. 7 GI Saratoga Derby Invitational and he was programmed for a G1 Prix de l'Arc de Triomphe trial in last weekend's G2 Prix Niel at ParisLongchamp, only to be withdrawn at the 11th for a reported outdated vaccination.

Soldier Rising (GB) (Frankel {GB}) was a bit under the radar at 14-1 in the Saratoga Derby, having won two of four in lesser company in France for the legendary Andre Fabre. The bay was off slowly from the inside stall and lagged well back, but turned in a powerful stretch rally up the fence that saw him finish just a length adrift of the victorious State of Rest (Ire) (Starspangledbanner {Aus}). Further improvement could see him get his picture taken here.