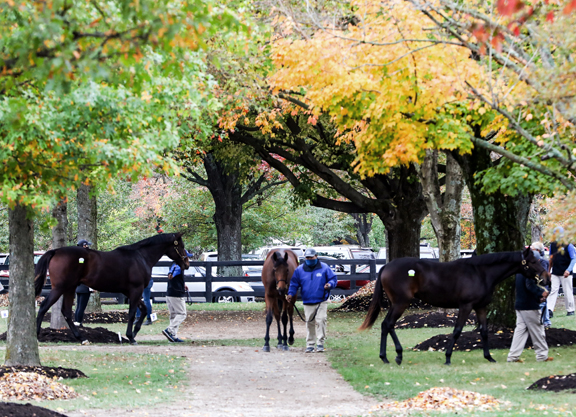 LEXINGTON, KY – The curtain comes down on a most unusual yearling sales season with the Fasig-Tipton Kentucky October Sale which begins its four-day run in Lexington Monday at 10 a.m. The auction will be following up on a record-setting 2019 renewal which saw new high marks for average and–from its largest-ever catalogue–gross, and will be held over four days for the fourth straight year as it continues to build its reputation as a must-attend auction for both buyers and sellers.

“This sale has been so good to us almost since we've been doing business here,” said consignor Peter O'Callaghan of Woods Edge Farm. “It's a great savior for one that misses its window at Keeneland, whether it doesn't quite make the cut at Keeneland and then does well in the meantime and comes back here, it can stand up well and get sold. For a horse that misses his date for some other reason, it's proved to be a great outlet for them. So I love this sale. I absolutely have no fears of bringing any nice horse here, whether it be an expensive foal or a homebred.”

On a chilly, overcast day at Newtown Paddocks Sunday, O'Callaghan said traffic has been good at the barns through two days of showing.

“We had quite a good day here Saturday,” O'Callaghan said. “I think we had over 70 cards, which is pretty good for here, certainly on a Saturday. And we are tipping our way along quite nicely today. You always look to see some more faces that we haven't seen yet, but they always seem to arrive here late, whether it's today or tomorrow morning. You very much have to play it out until the last minute. A lot of the action happens at this sale at the last minute. There are a lot of horses to get around, so we don't fully know where we stand yet.”

Of the make-up of the shoppers he has seen, O'Callaghan said, “There has been a mix of end-users and pinhookers. You'd always like to see more end-users, but there are a lot of pinhookers here. There are even some of the Irish pinhookers here, that will always be good for the sale.”

He continued, “But like most years here, the top 10% of this catalogue will sell very well and after that it will be touch and go as to what happens to the rest. It definitely trends that way every year. If you're lucky enough to get one or two at the top end of what's here, you've a good chance of doing well. And if you don't, you might struggle a little bit.”

Watching the action from Denali Stud's Barn 1 Sunday, Craig Bandoroff said he expects the prevailing polarization in the marketplace to continue this week in Lexington.

“I'm sure everybody is saying the same thing,” Bandoroff said. “They are going to look at 1,500 horses and decide which 150 they really want. I expect the polarization will be as severe as it's been any time this year. That would be my guess. There was a period at Keeneland [September Yearling Sale] where it did pick back up and the middle market surfaced. But there was a period where there was none. It was either you got them sold at a price you were happy with or there was the bottom. There was nothing in between.”

Derek MacKenzie of Vinery Sales did find reasons to be optimistic about a potentially more competitive middle market at the October sale.

Buyers continue to be selective in their bidding, but sellers can be rewarded above expectations for yearlings who meet all the criteria.