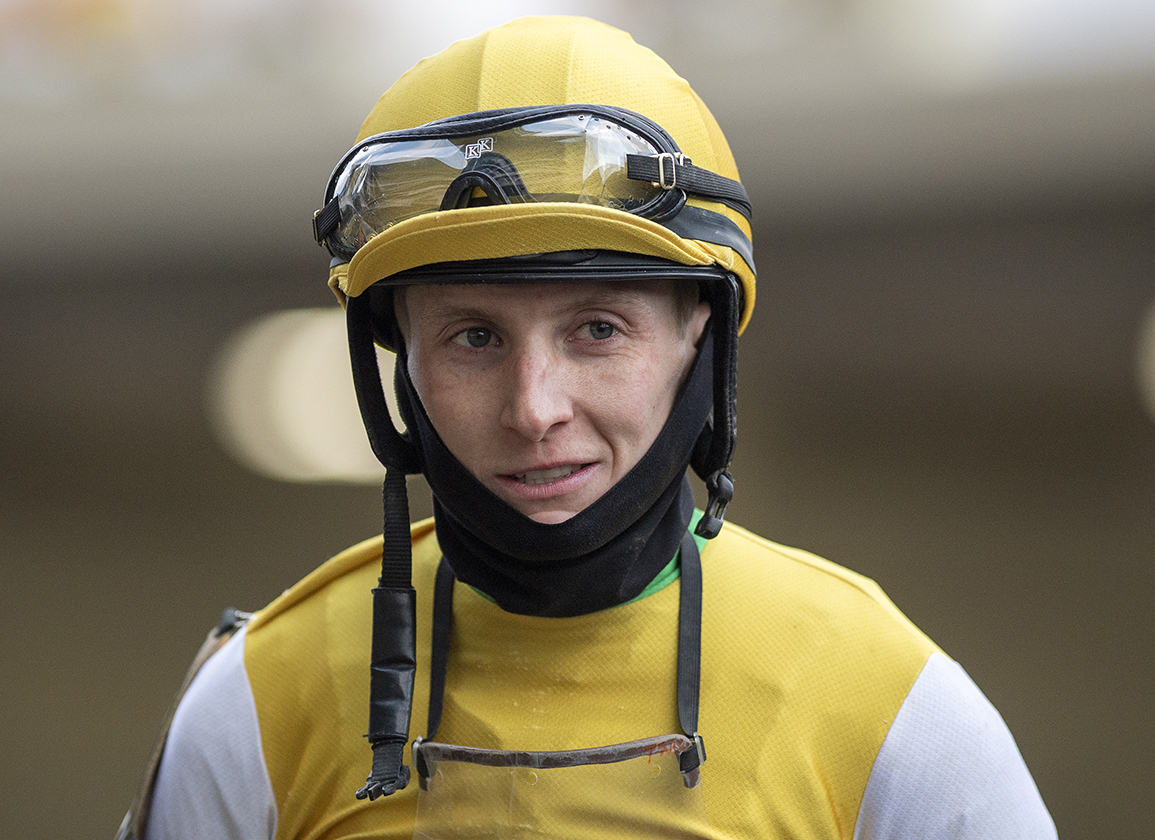 One year ago, a decades-old state requirement in New York that mandates that same-race mounts of married jockeys be coupled in pari-mutuel wagering cost the state an estimated $4.2 million in lost betting handle.

That same rule also caused two well-respected, just-married riders–Katie Davis and Trevor McCarthy–to uproot their lives during the middle of a pandemic, necessitating them to move from New York to California to try and earn livings by riding where no such restrictions exist.

In the midst of that upheaval, a New York lawmaker whose district includes Saratoga Race Course crafted a small but sensible piece of legislation to eliminate the spousal rule, which had widely been criticized as being outdated and sexist. That measure sailed unanimously through both the Assembly and Senate last spring.

But on Oct. 25, the bill was surprisingly vetoed by New York Governor Kathy Hochul, who explained that she would instead be directing the New York State Gaming Commission (NYSGC) to review the “continued need for mandatory coupling and the circumstances under which such a requirement might be relaxed.”

That directive by the governor nearly three months ago was what brought together a collection of Thoroughbred industry stakeholders, regulators, and track officials for a 90-minute NYSGC  videoconference hearing Tuesday morning to debate the issue of spousal mutuel couplings and related integrity issues that might pertain to newly legalized sports betting.

For the record, not a single speaker advocated in favor of keeping the antiquated rule as it's written. Nor did any participant cite any alleged harms that might result from relaxing it by allowing married jockeys to ride against each other as separate betting interests–just like sibling jockeys do, or unmarried but co-habitating riders are permitted to do, in New York.

But there were enough ideas brought up during the discussion to provide some traction for change.

They included the potential for New York's current rule to be eventually superseded by a national set of uniform rules that don't even mention restrictions on married riders; allowing New York's stewards to apply the existing rule at their discretion while informing the general public about perceived conflicts when married jockeys ride against one another, or doing away with all mutuel couplings altogether while letting the bettor beware.

The Jan. 11 hearing also unfolded against the backdrop of legalized sports wagering having just gone live in New York three days previously, and there was plenty of talk about how the NYSGC has no restrictions on its books about taking action on sports contests that involve family members.

Bennett Liebman, a New York attorney who is widely considered an expert on the intersection of horse racing, gambling, and New York State government, said one potential solution involved having the NYSGC follow the example of other international jurisdictions by restricting how and when “insiders” can bet (regardless of marital status) and more strictly policing instances of “improper assistance” or perceived collusion (by anyone) in races.

“If we want to avoid even the perception of conflicted loyalties, we need to have stronger rules and greater enforcement,” Liebman said, noting that he “prays for” an eventual implementation of national uniform rules to replace America's longstanding state-by-state patchwork of regulation.

Mindy Coleman, an attorney representing The Jockeys' Guild, said her organization advocates for a more flexible version of the current rule that would allow stewards discretion in mandating spousal mutuel couplings while keeping the betting public informed whenever spouses ride against one another.

“The stewards would still have the ability to couple entries in the event that it was deemed necessary if there are any concerns with inappropriate actions between the two parties that are related,” Coleman said.

Woerner added that, “It treats married jockeys and members of their households differently than other participants in racing, and it does so based solely on marital status. The rule pre-supposes match fixing proclivities in married persons, and assesses a penalty in advance of guilt.”

Like Coleman, Woerner recommended public disclosure–which was in her bill as being the responsibility of tracks. She said a notation in the program would likely suffice.

But Liebman pointed out that while disclosure may be necessary in theory, it doesn't work well in practice within the world of racing.

“Disclosure failed at the Breeders' Cup in November in the [GI] Juvenile Turf race [when] few knew the betting status of the eventual winner,” Liebman said. “We've had ample experience in New York to know that late rider, equipment, and gelding changes have never been communicated well… Getting an announcement at the track is like getting an announcement at a subway station. And in these days of mobile betting, these announcements are even less likely to reach the intended audience.”

As several speakers pointed out, New York's stewards already have broad powers when officiating races to investigate any alleged collusion, so why is the extra layer of the spousal rule even necessary when it diminishes the number of betting interests, and thus the revenue that goes to purses?

How Did NY Arrive Here?…

New York's spousal mutuel coupling rule was essentially a non-issue until it became a focal point of intense scrutiny in early 2021, when it affected the newly married McCarthy and Davis, who had then just moved their tacks from Maryland to New York.

Although the couple had ridden against each other numerous times while dating, when Davis and McCarthy began competing in common races at Aqueduct, it triggered the application of little-used rule 4025.10 (f), which states, “All horses trained or ridden by a spouse, parent, issue or member of a jockey's household shall be coupled in the betting with any horse ridden by such jockey.”

So on 41 occasions between Jan. 1 and Mar. 21, 2021, McCarthy and Davis's mounts in common races at Aqueduct necessitated a 1 and 1A coupling. A rough estimate of lost betting handle based on multiplying Aqueduct's winter/spring per-entrant handle of $103,000 by 41 resulted in a $4.2 million loss.

The rule was not only widely criticized by the general public, but it caused confusion among bettors, plus reams of bad press for Aqueduct (whose officials stated there was nothing they could do to change the law) and the NYSGC (which did not address the controversy during any open, public meetings).

By February 2021, Davis was claiming that Aqueduct racing office workers were pressuring trainers into not naming her on mounts so that field sizes would not be artificially reduced, an allegation that a track spokesperson denied at the time. She switched to accepting mounts in Maryland Apr. 8 while McCarthy continued to ride in New York.

On May 9, Davis announced on Twitter that she and McCarthy were expecting a child, and she stopped riding in races. Shortly thereafter, the couple relocated to Southern California, and McCarthy began riding on that circuit May 28. But after his record dipped to 9-for-156, he hurt an ankle and missed nearly three months while recovering from surgery.

The couple moved back to New York, where McCarthy resumed riding Nov. 18. Davis gave birth to a daughter Dec. 21.

'Laughable' in Other Sports…

William Gotimer, a Saratoga-based attorney who represents Davis, said at the hearing that if the NYSGC was serious about protecting bettors, why does it continue to allow in-state residents to wager on simulcasts from other states in which there are no restrictions that keep married jockeys from riding uncoupled against one another?

“While the commission takes great umbrage at the suggestions that this discriminatory regulation is aimed at women, there is no question that it has a disproportionate impact on women,” Gotimer said. “As such, it is my belief that it likely violates both the United States and the New York State's constitution as an example of government overreach.

“The commission seeks to justify the harm this regulation rains down on married riders and the racing industry by alleging this regulation protects the betting public against dishonest, married riders,” Gotimer said. “It is a little more than telling that the commission seeks to assure gamblers that it is protecting them by admitting that it is impotent to otherwise effectively police dishonesty or wrongdoing.”

Gotimer also added that it would be “laughable” to think that after having just legalized sports betting, the NYSGC might all of a sudden step in and say it will impose similar wagering restrictions on athletes who, for example, play in contests either against or on the same team with their siblings.

But Joe Appelbaum, the president of the New York Thoroughbred Horsemen's Association, suggested that the NYSGC might truly have to consider those other potential conflicts in sports betting. He cited integrity instances in which teams are believed to be intentionally losing or “tanking” to get higher draft picks, or when winning teams bench star players in pre-playoff games where finishing higher in the standings doesn't matter. Should the public be allowed to bet on those events?

“We have to decide, is integrity the most important thing that we're talking about, and enforce that across all sports, instead of just in one sport?” Appelbaum asked. “Horse racing, in many ways, has had a much higher regulatory structure and a much higher bar to cross. Even though that might not be the popular perception, it's the actual truth.

“Our recommendation, in addition to having no coupled entries at all, would be to have a thorough review of all the gaming regulations involving wagering to make sure they're consistent across sports,” Appelbaum said.