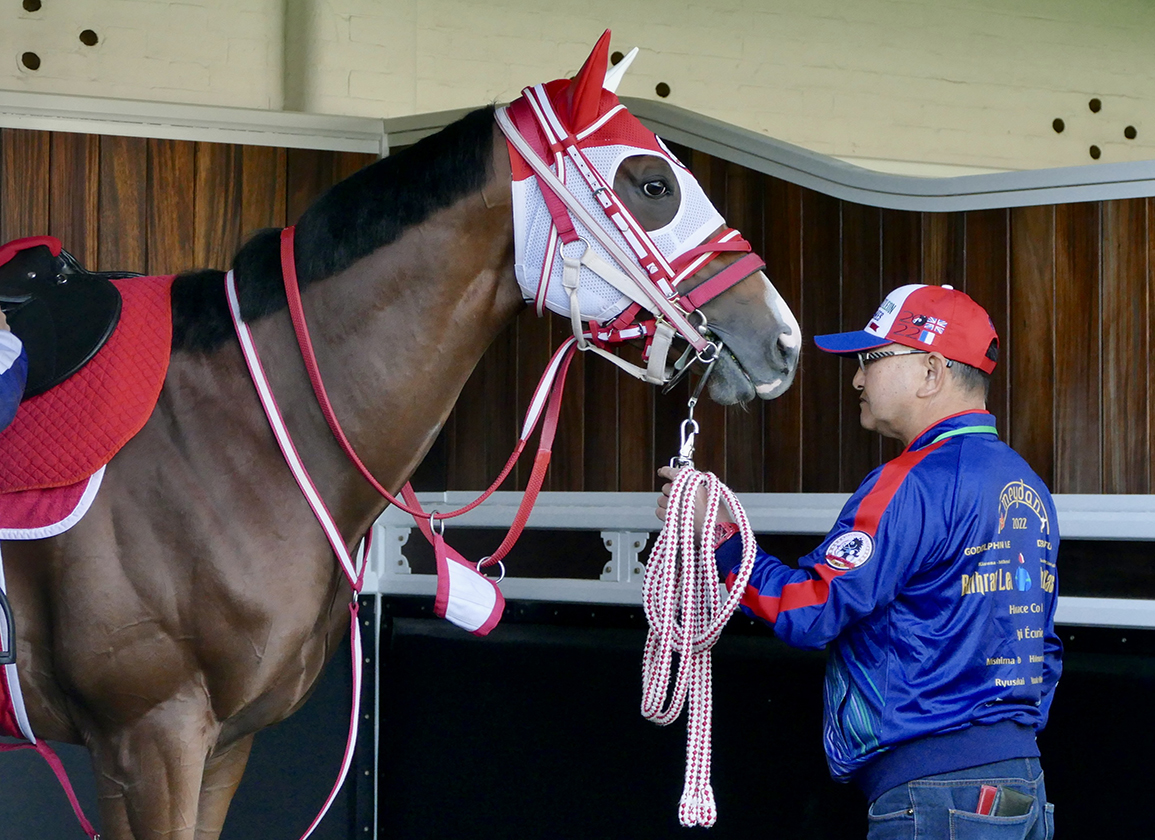 Japanese trainer Yoshito Yahagi has had quite the year on the international stage and his next target is this Saturday's G1 Darley July Cup with King Hermes (Jpn) (Lord Kanaloa {Jpn}).

The 3-year-old colt, winner of the GII Keio Hai Nisai S. last season, arrived in Newmarket on June 24 with his stablemate Bathrat Leon (Jpn) (Kizuna {Jpn}), who is set to run in the G1 Qatar Sussex S. at Goodwood. King Hermes got his first taste of the July Course on Tuesday morning when working five furlongs under jockey Ryusei Sakai and accompanied by two geldings trained by Roger Varian and John Berry.

After watching his horse school in the pre-parade and parade rings in a relaxed manner which continued throughout the exercise, Yahagi, who arrived in the UK on Monday and was speaking via interpreter Kanichi Kusano of the Japan Racing Association, said, “I am conscious that the horse lost his speed in the last furlong and maybe that was the hill but this work will make him understand how to run on race day.”

King Hermes, who has made just five starts and has not run over six furlongs since his juvenile debut in June 2021, has more recently been tested at a mile, but his trainer is not concerned with the drop back in trip for the July Cup, with the undulations of the course being a factor in this decision.

He continued, “I feel that the ideal distance for this horse is seven furlongs but since you have the incline here then maybe reducing to six furlongs will suit him as well.

“I was worried about his inexperience until I saw the horses today, but now I have seen him I feel quite confident for the July Cup. I specifically love the July Cup and the July Course and it would be a real honour if I was fortunate enough to win this race.”

It will be a first ride in the UK for Ryusei Sakai, who has international race-riding experience in Australia, Dubai, Saudi Arabia and France as well as at home in Japan. Yahagi is however familiar with Newmarket having spent three months on a Dubai-sponsored scholarship with Geoff Wragg's stable in 1990.

His love of travel have not abated since then. He last saddled runners in England at Royal Ascot a decade ago, but in the past year his profile on the world stage has risen, with a Breeders' Cup double courtesy of Marche Loraine (Jpn) and Loves Only You (Jpn) at Del Mar. This feat was followed by victory for Stay Foolish (Jpn) in the Longines Red Sea Turf H. on the Saudi Cup card and a treble on Dubai World Cup night with the aforementioned Bathrat Leon and Stay Foolish in the G2 Godolphin Mile and G2 Dubai Gold Cup respectively, while Panthalassa (Jpn) dead-heated with Lord North (Ire) in the G1 Dubai Turf. In among those international successes, Yahagi's Triple Crown winner of 2021, Contrail (Jpn), bowed out with victory in the G1 Japan Cup in November.

Japan has been represented by a July Cup winner in Agnes World, who won the race as a 5-year-old in 2000 for Hideyuki Mori in the hands of Yutaka Take.

Recalling this success for his home nation, Yahagi commented, “It is very difficult to compare King Hermes to [Agnes World] who was a very good sprinter. This horse is young and inexperienced but we are just looking forward to the experience.”