World of Trouble Proves Too Good in Jaipur 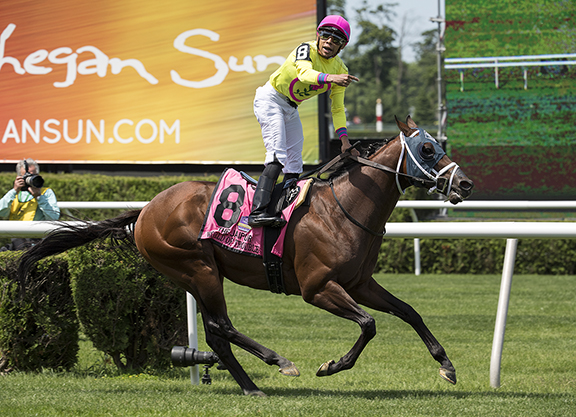 ELMONT, N.Y.–World of Trouble (Kantharos) proved too good for his foes in Belmont's newly upgraded GI Jaipur Invitational S. Saturday, taking them from gate-to-wire for a gutsy score. Gunining straight to the lead as always, the 2-5 chalk zipped through an opening quarter in:21.99 and a half in :43.85 with Belvoir Bay (GB) (Equiano {Fr}) tracking from second. Belvoir Bay and Om (Munnings) tried to challenge in early stretch, but World of Trouble had plenty left in the tank, easily extending clear of those foes to register a 1 3/4-length score. Om got up for second and record-setting past Jaipur winner Disco Partner (Disco Rico) completed the trifecta.

“Man, what a horse,” trainer Jason Servis said. “I have to tell you, for some reason I missed the [fractions]. I was watching him on the binoculars. I was a little bit relieved that [Belvoir Bay] didn't press him. I got a little worried at the eighth pole and then it looked like he was going to be okay. I think he runs a little scared like 'I gotta go, I gotta go' but he's a special horse. I'm looking forward to training some of his offspring. If I had a mare, I think I'd want to breed to him with that speed.”

“No one can do what Jason has done, he's really brought this horse along incredibly,” said owner Michael Dubb. “He picks his spots and hasn't taken him to the mat every race. He just has spaced his races and done everything the right way. I'm really in awe of job he's done.”

Privately purchased by Kim Valerio on behalf of Michael Dubb after his second start, World of Trouble dominated the Pasco S. on dirt last term in his first start for Jason Servis. Off the board in the GII Tampa Bay Derby and GII Woody Stephens S. last term, he reeled off wins in the Quick Call S. and Allied Forces S. on the turf and was nailed on the wire to finish a close second in the GI Breeders' Cup Turf Sprint S. Nov. 3. Starting off this season on the right foot with a win in a sloppy off-the-turf renewal of the Gulfstream Park Turf Sprint S. Jan. 26, the bay scored his first top-level success back on dirt in Aqueduct's GI Carter H. Apr. 6 and captured the GII Twin Spires Turf Sprint on Derby weekend May 3.

Kantharos's dam Meets Expectations is a half-sister to a MGSW turf sprinter by Kantharos in Bucchero. She is also responsible for stakes winner Money or Love (J Be K); an unnamed juvenile full-brother to the winner, who was a $285,000 KEESEP yearling; and a yearling filly by The Big Beast. She was bred back to Frosted last spring.