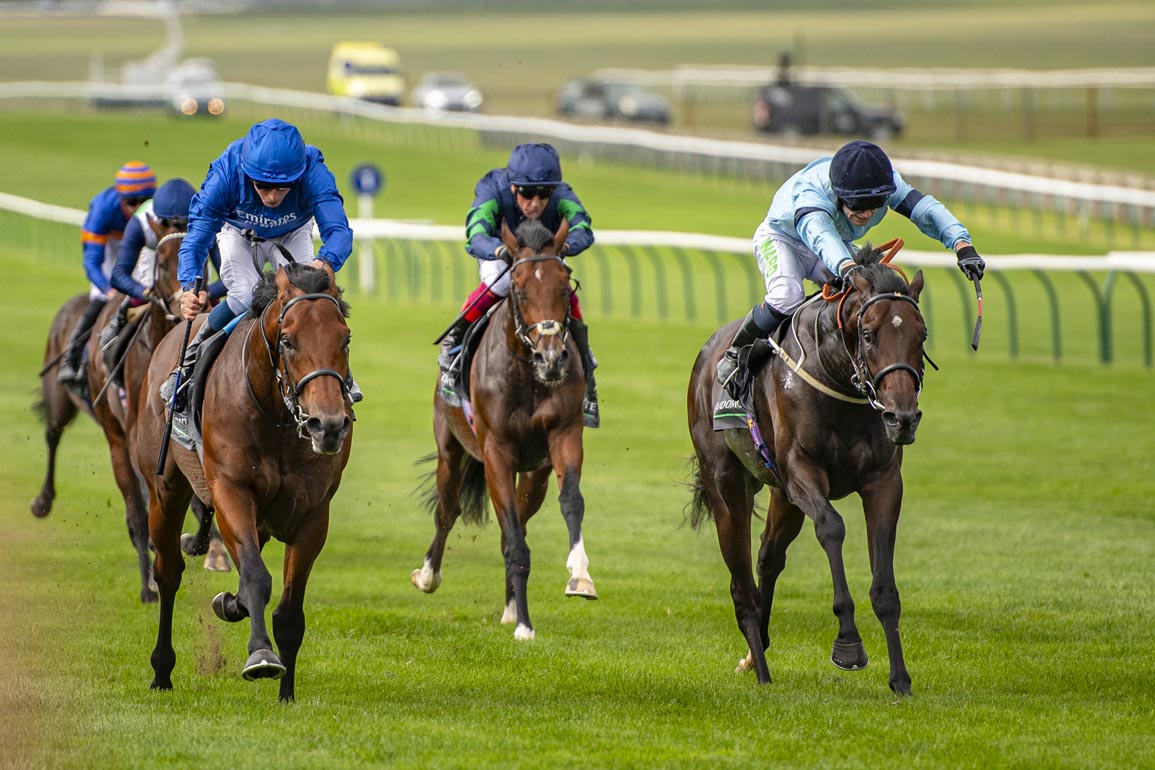 Highclere Thoroughbred Racing's 62,000gns Tattersalls October Book 1 graduate Royal Patronage (Fr) (Wootton Bassett {GB}) shed maiden status in style when routing his rivals by five lengths and more in a July 29 Epsom novices' event and the Mark Johnston trainee defied odds of 25-1 when value for his 2 1/4-length score in York's Aug. 18 G3 Acomb S. when last seen. The April-foaled bay had previously encountered Native Trail (GB) (Oasis Dream {GB}) when second to that subsequent G1 Vincent O'Brien National S. hero in a June 11 Sandown maiden. Digging deep in Saturday's G2 Juddmonte Royal Lodge S. at Newmarket, he made every yard count in his first try at the one-mile distance and swooped late to deny the hitherto undefeated Coroebus (Ire) (Dubawi {Ire}) in the dying strides for a career high and punch his ticket to the GI Breeders' Cup Juvenile Turf at Del Mar in November in this “Win and You're In” qualifier. The 7-2 third choice was swiftly into stride and held sway at a steady tempo through the initial fractions. Unflustered at first when headed by Coroebus past halfway, he came under pressure approaching the quarter-mile marker as that rival surged clear soon after and stayed on relentlessly for continued rousting up the hill to wear down that floundering 85-40 joint-favourite by a neck nearing the line. Fellow joint-favourite Masekela (Ire) (El Kabeir) was unable to land a telling blow and finished 5 1/4 lengths off the winner in fourth, 2 1/2 lengths behind Atlantic Thoroughbreds' 33-1 outsider Unconquerable (Ire) (Churchill {Ire}) in third.

“The Godolphin team were standing beside me watching the race and, with a furlong to go, they thought they'd won and I thought they'd won,” revealed Mark Johnston. “I was actually very happy with the run at that point as I could see he was starting to stay on away from the pack. I was thinking to next year and thinking 'this will be one for the Derby trials early' on. Jason [Hart] said he was a bit free early on, but as soon as he hit the rising ground he just found another gear. We had some doubts about stepping up to the mile early on as he has a lot of speed and we almost supplemented him for the [seven-furlong G2] Champagne S. at Doncaster. It literally went to the wire, deciding whether to supplement or not. We decided against it in the end, which we regretted after it broke up so much, but we were reasonably convinced that going further was going to be better. He certainly proved that today.”

Looking ahead, the trainer added, “I don't know if he will run in the [G1] Vertem Futurity Trophy [at Doncaster], but I'll speak to [Highclere Thoroughbred Racing's] Harry [Herbert] and see what he has to say. He looks like a Derby horse and it's great when you've got a horse who you're thinking might stay a mile-and-a-half. He is showing so much speed early on as well and that's ideal.”

Runner-up Coroebus looked to have gone beyond recall when displaying impressive acceleration on the front end inside the final quarter mile, but a lack of experience told on the climb to the line as Royal Patronage zeroed in on the perfect target. “It's always hard when you pass them all and then get passed again,” said trainer Charlie Appleby. “We've been pleased with him at home, he's a beautiful-looking horse and he'll have learned plenty today. I think he's just got a bit lonely out in front there in the end. He only had one run under his belt and got picked up by a horse who has had plenty of racing now. Take nothing away from the winner, he'd won an Acomb and he's obviously a good horse.”