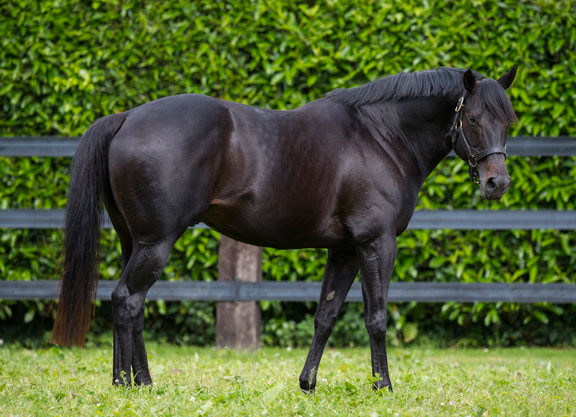 Wootton Bassett (GB), one of four new sires on the Coolmore roster for 2021, will stand for €100,000 off a glittering season on the track that saw him sire two new Group 1 winners and 10 stakes winners.

Coolmore announced its purchase of Wootton Bassett in June from Haras d'Etreham, where the son of Iffraaj had stood since retiring to stud in 2012. After standing for as low as €4,000 in his third season, Wootton Bassett had been priced at €40,000 the past two seasons. Just a week after the announcement, Audarya (Fr) became Wootton Bassett's second Group 1 winner in the Prix Jean Romanet, and she bolstered that form last weekend with a victory in the GI Breeders' Cup Filly & Mare Turf. Meanwhile, Wooded (Fr) won the G1 Prix de l'Abbaye on Arc day, besting the defending winner and subsequent GI Breeders' Cup Turf Sprint scorer Glass Slippers (GB). Wootton Bassett's other 2020 standouts include the G2 Champagne S. winner Chindit (Fr), GII Sands Point S. winner Tamahere (Fr), GIII Franklin-Simpson S. winner Guildsman (Fr) and G3 Prix de Fontainebleau scorer The Summit (Fr).

Circus Maximus remains under consideration for the Hong Kong International races in December before retiring. The winner of the G1 St James's Palace S. and second in the G1 Sussex S. in the summer of his 3-year-old year, the Niarchos Family's Flaxman homebred added another Group 1 win in the Prix du Moulin that September prior to a fourth in the GI Breeders' Cup Mile. At four, he displayed his affinity for Royal Ascot with a win in the G1 Queen Anne S., before another second in this year's Sussex and a third in both the G1 Prix Jacques le Marois and another edition of the Prix Moulin. The bay bounced back with a close second two starts later in the Nov. 7 GI Breeders' Cup Mile. His record stands at 17-5-3-3 and $1,881,584 in earnings.

“Circus Maximus is very tough and travels with a lot of speed,” said trainer Aidan O'Brien. “He's that type of horse that can often make very good stallions. We'll definitely be breeding to him.”

Circus Maximus's sire and Coolmore lynchpin Galileo (Ire) is once again listed as private off a stellar season that saw him break the worldwide record for Group 1 winners for a sire (85) and add three new Classic winners among his nine Group 1 winners for the year: G1 1000 Guineas and G1 Oaks winner Love (Ire), G1 Irish 1000 Guineas victress Peaceful (Ire) and G1 Derby scorer Serpentine (Ire). Search For A Song (Ire) won the G1 Irish St Leger for the second straight year, while the evergreen Magical (Ire) and Mogul (Ire) were also standouts.

The vast majority of Coolmore's proven sires receive slight fee cuts for 2021 in the midst of a difficult global economy, but one that goes up is Camelot (GB), who will stand for €45,000 next year off a season that saw him add four new Group 1 winners, including Irish Oaks scorer Even So (Ire) and Australian sensations Russian Camelot (Ire) and Sir Dragonet (Ire).

No Nay Never is the only other advertised six-figure fee on the roster aside from Wootton Bassett, and he is trimmed to €125,000 from €175,000. Fastnet Rock (Aus) will once again shuttle from Australia and will stand for €50,000 after his One Master (GB) won her third straight G1 Prix de la Foret in October.