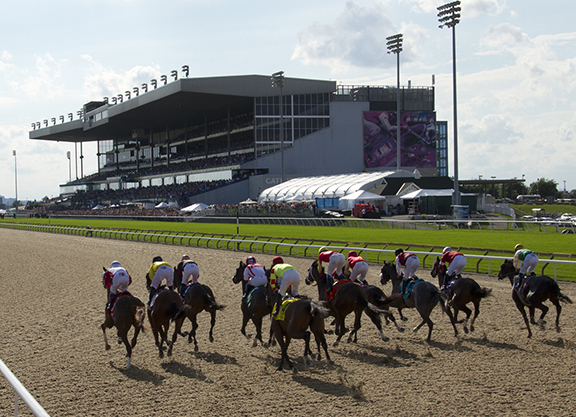 Woodbine Entertainment Group (WEG) is planning to seek approval for a June 6 or 13 start for its pandemic-delayed Thoroughbred race meet, and the firm's chief executive officer, Jim Lawson, said in a public video chat Tuesday that he does not expect overnight purses to be adversely affected this year despite mounting losses from the closure of WEG's gaming facilities.

Woodbine will also seek to move its signature stakes race, the Queen's Plate, from June 27 to a September date that has yet to be determined.

Lawson said one near-term upshot with horse racing restarting earlier than other team sports is that Woodbine is working on a deal to get both its Thoroughbred and harness races broadcast in prime time on TSN, which is Canada's national sports television channel.

And although Woodbine has proposed COVID-19 protocols to its provincial regulators that are more stringent than what some United States racetracks are doing right now–like requiring jockeys to wear masks all the way into the starting gate until the race goes off–Lawson said licensed personnel at Woodbine will not be mandated to be tested for the coronavirus as a condition of entering the grounds.

The National Thoroughbred Racing Association published best-practice guidelines for racing during the pandemic May 7 that do not recommend widespread virus testing. But several U.S. tracks, such as Churchill Downs and Keeneland, willl require it.

“We're not in a position right now to be doing testing of people on the backstretch. It's not something that we have the expertise to do,” Lawson said.

“The short answer right now is people need to self-isolate [for 14 days] if they've come from another jurisdiction,” Lawson said, noting that horses are free to ship in without restriction if they are cared for by licensees who are either already on the grounds or have completed that quarantine.

“Self-isolation is not our decision. That's the government's decision,” Lawson said. “We'll see where we get to on testing. I think we are at some point hopefully going to be in a position to test people, especially if they've had to self-quarantine or self-isolate because there's been virus in their family, for example….Hopefully we'll all get to the point where there is testing available so those people can re-enter the workforce.”

Jockeys will be allowed to enter the grounds to exercise horses starting Wednesday, Lawson said, and the starting gate will be available for schooling that morning. Timed workouts can begin  Friday, and Woodbine's training track is expected to open May 22 to accommodate a rising horse population.

Whichever of those Saturday dates that the Thoroughbred meet opens–June 6 or 13–the Standardbred season will resume the night before, on a Friday. Both breeds customarily race at different post times at Woodbine on separate surfaces.

The initial week of afternoon Thoroughbred racing will just be a Saturday and Sunday, then Woodbine plans to go to a three-day week and, eventually, four days per week.

A new wrinkle could be the swapping out of Wednesday evening racing for an afternoon Thursday post time. That's partially because of the pending TV deal and partially because Woodbine won't be allowed to race with spectators present out of respect to social distancing mandates.

“We've been engaged in discussions with TSN in moving into prime time on either Thursday or Friday nights with a horse racing show, and the idea is that we would like to have both breeds that race on either a Thursday or a Friday night,” Lawson said. “That would mean a potentially 4 p.m. start time for the Thoroughbreds…. I think it would be a mistake not to take advantage of it.

“Wednesdays have always been a big food and beverage night for us [because] people like going to dinner at Woodbine,” Lawson continued. “[But] we won't be able to offer any food and beverage, so our hope and plan is to run on Thursday [afternoons]. It's better for [betting] business.”

Access to non-essential racing personnel could open up on a “limited basis” over summer, Lawson explained. But he added that “our planning right now is, at least through September, that we're not [going to be allowing] spectators.”

Lawson said that horse owners do not meet the current standard for “essential” personnel.

“That question's come up a few times, and understandably so,” Lawson said. “The owners pay the bills and have the investment. I've talked to many, many owners [but I hope they understand that] we need to keep [population] numbers down on the backstretch. We need to keep people safe, and I can't underline that enough. We all want racing to start, and the more we can control the people and control physical distancing and have less people back there, the better off we're all going to be.

“If we have problems with illness in the jockey colony…and on the starting gate crew, we've got an issue in terms of how to manage this,” Lawson said. “We're being extremely careful with our jockeys, and we cannot proceed with racing if we were to have an outbreak of the virus within our colony.”

Moving the Queen's Plate to September opens up the chance that at least owners would be allowed to attend what Woodbine bills as “the oldest continuously run race” in North America.

“Part of our thinking is there's a better chance for spectators in September,” Lawson said. “In any event, we feel like we need a couple of months of prep races to get horses ready to go 1 1/4 miles.”

Just like officials at Keeneland told TDN last week, part of the rescheduling dance for major stakes involves not stepping on the toes of other tracks.

“It's a little different now with dates shifting. We have to make sure that we're not bumping squarely into what other racetracks are doing,” Lawson said. “We're just making sure that we don't make a mistake and land on a date without all the other considerations. And as other racetracks are going through the same process, we need to coordinate…. I don't think it would be the right thing, for example, to run the Queen's Plate on the same day as the [Sep. 5 GI] Kentucky Derby.”

The Queen's Plate is restricted to Canadian-bred 3-year-olds, but other graded stakes deeper into Woodbine's season typically attract international shippers. Lawson said it's far too early to tell what type of government restrictions will be in place at that time.

“Maybe by the time of [the autumn stakes races] the rules will be eased in terms of cross-border traffic,” Lawson said. “But right now it would  be a problem for horses shipping in. They'd have to ship in on their own [and be taken care of by someone already at Woodbine].”

Lawson said that there is no plan to make up lost dates from this spring by extending the Thoroughbred meet past its traditional mid-December closing.

But, he added, overnight purse levels are expected to remain unchanged for the balance of 2020.

“There's no expectation that purses will be impacted this year. [Based on existing agreements with horsemen and regulators], we're locked. Purses are no longer tied to wagering and casino income.

“What concerns me, and I'll be quite frank about it, is certainly [WEG's own] revenue,” Lawson said. “We are going to be down substantial amounts of revenue as a result of the casino shutdown…. I want to keep optimistic in terms of this conversation today, but it's certainly a concern for the future, and that's why we've been looking at historical horse racing…to see if there are ways we can generate additional income in the future, because we're going to feel this hit for awhile. Even if the casinos get started this summer or this fall, I think we all can appreciate it's going to take a long time for them to ramp up.

“Of course the races that have been canceled, those purses, effectively we're looking at this on a pro rata basis going forward,” Lawson continued. “Particularly on the Thoroughbred side, we're going to have to look at the stakes program more closely in terms of [what to do with purses if those races don't get run]. But overnight purses, we plan on keeping them the same, and there will be some adjustment on the stakes side, just balancing out the stakes purses.”