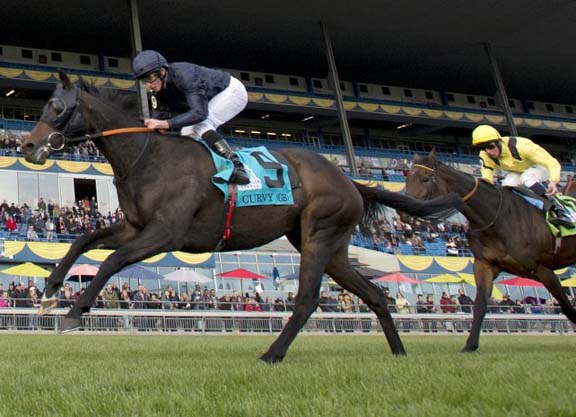 Situated just inside the Toronto city limits, Woodbine Racetrack has never been afraid to step outside the confines of traditional thinking and test a new idea. In 2016, Woodbine held clockwise turf races over its famed E.P. Taylor Turf Course, and earlier this year, the track announced that a second turf course will be installed in place of a soon-to-be-defunct harness racing oval. Consistent with a heavy emphasis on grass racing, the track's latest innovation is a four-leg series of stamina-testing turf races contested under starter optional claiming conditions.

With both monetary and complementary rewards available to the connections of series competitors, Woodbine Vice President of Thoroughbred Racing Operations Jonathan Zammit said the idea of the Woodbine Turf Endruance Series was hatched as a product of a “you don't know until you try” mind set.

“Understanding the growing popularity of longer, turf races, we thought to ourselves, 'What is something we can do outside of our regular program? What can we do differently?'” Zammit said. “We've seen a few series pop up here and there, and we thought we could try something along those lines. We wanted to focus on longer turf races.”

While the first leg of the series–held over 1 3/8 miles July 22–garnered a win-place-show pool of $178,141, the betting public's enthusiasm for the Aug. 19 1 1/2-mile second leg grew noticeably, with $264,509 passing through the parimutuel windows. With the third leg slated for Saturday and some familiar faces returning to the entry box for the 1 5/8-mile test, Zammit says there is every reason to believe the upward trajectory will continue in the final two installments of the series.

Zammit credited Woodbine's racing office for having numerous conversations with staff and horsemen, alike, to field starters for the races and facilitate successful wagering events.

“We definitely have a robust supply of horses back there to field this,” Zammit said. “But what we've noticed is that we are getting some out-of-towners jumping into the race, too. In the second leg, we had a gentleman, Neil Morris, participate. In terms of our own population, we know we have the supply to fill the demand for these races. Hopefully, the third leg will be our highest field yet.”

Morris, an accomplished steeplechase trainer, shipped Swellelegent (Pure Prize) in from his Mid-Atlantic base to finish fourth in the second leg of the series and will be back in action Saturday. As for local horsemen, the series represents a unique opportunity to test the staying power of their trainees–who accrue points based on their finishes in each leg, with the winner of the series receiving a $15,000 prize. As an added bonus, competing owners and trainers are allowed to enjoy complementary dining, while individual race winners receive a commemorative cooler.

“Any time we're in the position to complement and thank our horsemen for competing at Woodbine, we're going to do that,” Zammit said. “It's a way of saying, 'Thank you for trying something new.' We're always open to feedback.”

Regardless of the feedback, Zammit said that an “amped up version of the series” is likely to be brought back in 2018, in addition to the possible advent of a parallel series for turf sprinters.

“For something that was put together rather quickly, it has met our expectations,” Zammit said. “We're really positioning ourselves to be that premier turf destination in North America. We want to try something new and learn.”

The fourth and final leg of the series will be held Oct. 22 over 2 1/4 miles–a distance which is believed to be the longest flat race run over a conventional North American racecourse in 2017.

As for new innovations in the pipeline north of the border? The track will run a $50,000 “Grey Handicap” restricted to grey horses on the GIII Grey S. undercard Oct. 1.