Home » Archive » Shared News » With The Goal of Winning 7,000 Races, Pino is Back for Another Year

With The Goal of Winning 7,000 Races, Pino is Back for Another Year 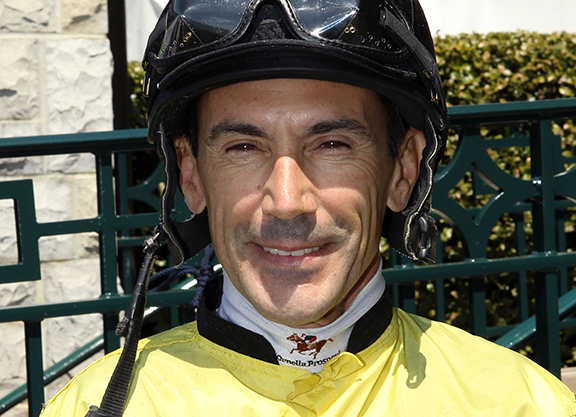 When Mario Pino began riding way back in 1977, he figured he'd stick around for a few years and then go off and do something else. Weight was an issue and he wasn't sure that he had the desire to keep grinding away. Forty-four years later, Pino, 59, resumed his career last week at Gulfstream and is determined to plug away until he gets his 7,000th win. He needs 39 more winners to reach that milestone, something only nine jockeys have ever achieved.

“I'm just 39 away and that's why I am coming back,” he said. “I want to see if I can do it. It's a goal of mine and I am really close to doing it. I'm still healthy, I feel good and I love riding horses.”

Born in Wilmington, Delaware, Pino has been a fixture on the Mid-Atlantic circuit since he rode his first horse at Penn National. He has ridden some good horses, most notably Grade I winner Hard Spun (Danzig). He finished second aboard him in the 2006 GI Kentucky Derby and also paired with him to win the GI King's Bishop S. at Saratoga.

But his career has mostly been about perseverance. Year in and year out, he showed up at places like Laurel, Delaware Park, Colonial Downs and Presque Isle Downs and the wins followed. In 2001, he won 297 races and followed that up with 285 winners the next year. In 2016, he moved past Hall of Famer Jorge Velasquez to become the 10th winningest rider of all time.

“The wins started to add up and I started to get into the history of horse racing,” Pino said. “Considering how many great jockeys there have been, it was incredible to me that I was 10th all time. I just kept going and everything kept snowballing.”

He needs just 194 wins to move into sixth place all time, but he doesn't see that happening. In recent years, Pino has settled on a routine that limits his chances of winning races. He doesn't ride in the afternoons in the winter and instead gallops horses for Wesley Ward. He starts off his year at Gulfstream in the spring and then heads to Presque Isle in the summer. When that meet is done, he goes back to Florida and gears up to do more of the same the next year.

Every time Pino thinks of retiring, Ward is among those who encourage him to come back for another year.

“I was thinking of calling it a day,” Pino said. “I spoke to Wesley about that and he said that, being so close to 7,000, I should keep going. He said that if I didn't, I'd always look back and think that I should have kept going to get to 7,000. I'm going to push myself to get there.”

Soon to be 60, Pino is among a group of riders who seem intent on proving that this doesn't have to be a young man's game. Perry Outz is still winning races at age 66. Jon Court is 60 and is going strong. Then, of course, there is Mike Smith. As in demand as any rider in the sport, he is 55.

“You see that jockeys are pushing themselves to last longer and one of the reasons is better nutrition and that they know they have to take care of themselves physically,” Pino said. “These guys who are lasting longer were all successful earlier in their careers and prolonged their career because they love what they are doing and they're still good at it. If you take care of yourself physically and mentally, you can keep going. It's the horses that do the running. If you take care of yourself, you can keep riding.

“Physically, I am in better condition now than when I was at 30,” Pino said. “Even though I might not be riding as many horses, I always try to be physically prepared. If you talk to any athlete who is getting older, when they get older they work out more, prepare more and take care of their bodies more. When you are younger, you take those things for granted.”

Pino won only 21 races in 2020, which had a lot to do with the Presque Isle meet. It is normally 100 days, but was limited to 50 last year because of the coronavirus. This year, the track, which opens July 5, is scheduled to operate for only 52 dates. Pino said that if he gets off to a good start in Florida he may decide to stick things out at Gulfstream.

In the meantime, he will just do what he's been doing since he was 16. There may not be any graded stakes wins in his future and he won't battle it out for leading rider anywhere. That's fine by him. He's got 39 winners left in him. He feels confident about that.