Home » Archive » Shared News » With New Innovations and a New Beginning, Dickinson Aiming Higher Than Ever

With New Innovations and a New Beginning, Dickinson Aiming Higher Than Ever 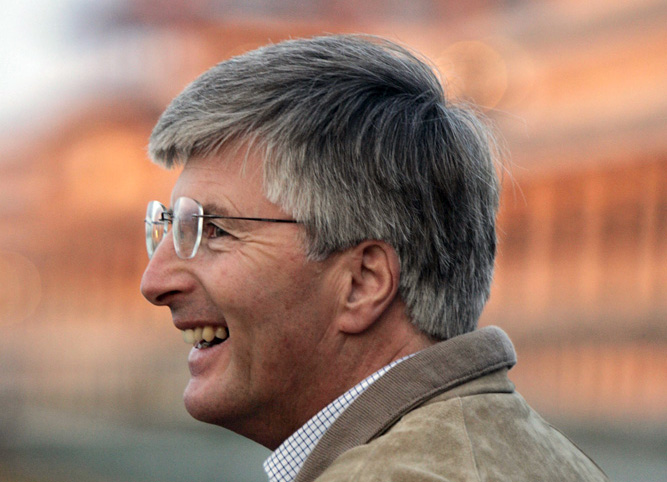 By the only standards that matter to him, his own, Michael Dickinson is not satisfied with what he has accomplished as a trainer in the U.S. His list includes two wins in the GI Breeders' Cup Mile, six other Grade I wins and more than 600 victories overall, but those numbers pale in comparison to what he expected from himself when he arrived here from England to begin a new chapter in his career in 1987.

“I didn't do that well before,” Dickinson said. “When I came here people wrote that I would no doubt do quite well, and I didn't. I just did OK. I felt I could do much better. A lot of people did better than me. I can think of 30 trainers that performed better than me. It doesn't sit well to me to be 31st. I want to go out and prove to myself that I am a much better trainer than my record shows.”

So, some nine years after he started his last horse in 2007, Dickinson, 66, has turned over the duties of running Tapeta Footings to his wife, Joan Wakefield, and has returned to training. With 10 horses under his care and more about to arrive, he has re-opened his Tapeta Farm in Maryland and has set out to make it the optimal environment to get the very most out of every horse under his care.

“We have lots of new ideas,” he said. “It's going to be a case of an aggregate of many marginal gains.”

Dickinson was among the most successful steeplechase trainers in the history of English racing and his legendary feats in that sport included training the first five horses across the wire in the 1983 Cheltenham Gold Cup. After a brief and unsuccessful stint as the private trainer for Robert Sangster's flat horses, he pulled up stakes and came to the U.S. looking to reinvent himself as one of this country's most successful and innovative trainers.

He was far from a failure. He had a 23% win rate, pulled off a minor miracle when winning the 1988 GI Breeders' Cup Mile with Da Hoss (Gone West) after what was essentially a two-year layoff and developed Tapit (Pulpit), who has gone on to great fame and fortune as sire.

But, considering Dickinson's success in English steeplechase racing, the bar was set very high. And he doesn't feel like he lived up to expectations, whether his own or those of the experts who felt he would be the next great thing in American racing.

It was not, however, a lack of success that led him to leave training. Always a tinkerer, Dickinson was at the forefront of the synthetic surface movement and began to sell his invention, a synthetic surface he named Tapeta, Latin for carpet, around the globe. While many believe that Tapeta is the best of the new surfaces that hit the market, synthetic surfaces never took over racing like many expected they would.

With Wakefield able to handle the duties of running the track surface company and with Dickinson yearning to prove he was up to the second part of his nickname, the “Mad Genius,” a return to training began to make sense.

In its first go-round, Dickinson's farm was known for its tools, gizmos and for its proprietor's belief that nothing is too good for his horses and no idea is too weird to give a try. Dickinson didn't just have a turf course. He had three, one for normal conditions, one for drought conditions and one that duplicated a soft race course. It wasn't good enough to train horses on a flat surface, so he built another gallop that goes straight up hill on a steep incline.

Yet, all the bells and whistles didn't produce as many winners as Dickinson had hoped for, so the new Tapeta Farms has even more bells and whistles. Dickinson has built an area he calls the “Performance Center.” It includes a “salt room,” where air with salt added in is pumped into the room for the horses to breath. The belief is that the salt air will help clear up respiratory problems. The room also includes a vibrating platform, which produces an effect much like those beds you used to find in motel rooms that would vibrate after you stuck a couple of quarters in them. There's also a whirlpool and he will soon be adding a hyperbaric chamber.

Some of his new ideas and innovations came after he spent months talking to people outside the racing industry, including trainers and health professionals in human sports. He wanted to pick their brains and see if they had insights that were foreign to horse racing but that would be beneficial to his horses.

But he is most proud of two new employees that will be joining his staff. He has hired two equine physiotherapists who will work solely for him and says each one is among the very best in their field.

Dickinson has a list that includes 26 different things that he has at his disposal that no trainer stabled at a racetrack could possibly have.

Dickinson said that his day rate is no higher than those of the top trainers based in New York and that it will be exceeded by his costs. Because of that, he says the only way his venture can be profitable is to win a lot of races and a lot of big purses.

“I known I can fill the barn full of 40 horses, but that's not going to cut it,” he said. “I have to fill the barn with 40 good horses. We've tried very hard. You see all the innovations we've done here.”

Perhaps the biggest knock on Dickinson during his first act as a trainer is that his horses ran too infrequently. While it might be a neat trick to win a race off a three-year layoff, would that same horse have run 15 times over those three years with any other trainer? Dickinson is well aware of that criticism and understands that he has to do much better in that department this time around. With that in mind, many of his new techniques, including the hiring of physiotherapists, involve getting a horse back to the races more quickly than he did in the past. He also realizes he can't afford to be such a perfectionist.

“The more we run them, hopefully, the more we will win and the more prize money we will collect,” he said. “It's not the end of the world to finish second, especially if you have a big check. It's just that I always have hated to lose.”

He admits that he often refused to run unless he was 100% certain the horse was 100%. Ninety-nine never seemed to be good enough.

“That's a fair criticism, and I recognize that,” he said.

He has yet to have a starter this year and says that's because every one of his horses are turf runners and won't be in the entries until grass racing starts up in the Northeast in the spring. He also hinted that there may not be any potential stars among his current group, which means they may represent little more than something to get started with.

For Dickinson, though, it's not about today or even the near future. He is starting over and trying to build something. He knows he was good but good wasn't good enough. He's given himself a second chance to be great at the job of training a race horse. Now, all he has to do is deliver.