With Chance It, Joseph Close to Fulfilling Derby Dream 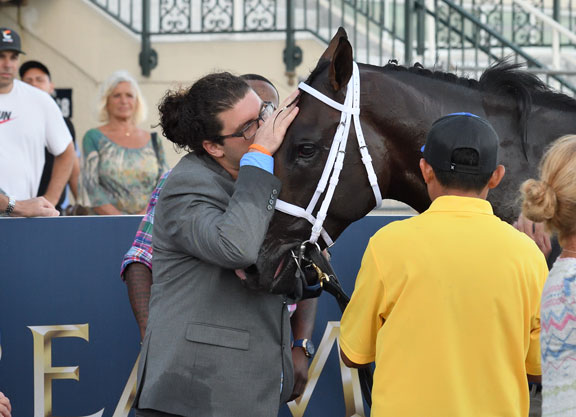 When Saffie Joseph, Jr. arrived in the U.S. from Barbados in 2011, the then 24-year-old didn't come here to be just another trainer. He wanted what racing in Barbados could never offer him, a chance to prosper on a big stage and to become one of the top trainers in the sport. Some nine years later, he's on his way, capturing training titles at Gulfstream and Gulfstream Park West and winning graded stakes with horses like GI Pennsylvania Derby winner Math Wizard (Algorithms). This year alone, he's won six stakes, four of them graded.

Now, Joseph is hoping to take the next step, to win the GI Kentucky Derby. After focusing mainly on claimers throughout his first seven years here, he has come up with a horse who could be his ticket to Churchill Downs and all the fame that goes with having a Derby starter. Coming off a win in the Mucho Macho Man S., Chance It (Currency Swap) will be tested for class when he goes next in Saturday's GII Fasig-Tipton Fountain of Youth S. at Gulfstream.

“It would mean everything to have a horse in the Derby,” Joseph said. “I came from Barbados for these dreams, to try to get to the Derby and, hopefully, one day win it. We're on the way. We're pretty close.”

A Florida-bred, Chance It lost his first start, but recovered with an easy maiden win in June over state-breds.

“Second time out, we were hoping that he would run like how we thought he could,” Joseph said. “You still never envision something as impressive as that was. You couldn't get much better than that. At the quarter pole, I turned to my mom, who likes to come to the races, and I said, 'He's everything we dreamed of.'”

Chance It was a dominant force in state-bred races all last year and capped off the season with a win in the $400,000 FTBOA Florida Sire In Reality S. Joseph knew that the next step had to be a race against open company, a race that would tell him whether or not he had a legitimate contender for the Triple Crown races. Joseph picked the Jan. 4 Mucho Macho Man S. and while Chance It was not dominant, he did show that he's a fighter. He was passed by As Seen On TV (Lookin At Lucky) in the stretch, but battled back to win by a head.

With Chance It having passed a big test, Joseph began to plot his course to Churchill Downs. He decided to sit out the GIII Holy Bull S. because it awarded only 10 Kentucky Derby points to the winner. The winner of the Fountain of Youth receives 50 points.

The Fountain of Youth will be a stiff test for Chance It. Headed by beaten GI Breeders' Cup Juvenile favorite Dennis' Moment (Tiznow), it looks like it will be the toughest Kentucky Derby prep run so far this year. But Joseph will go into the race loaded with confidence.

“Chance It, as far as his attributes and ability, from the time he came in, he's basically shown that he was a classy horse,” he said. “Each time, he keeps wowing you and wowing you with everything he does. He's always shown that he has a special ability. Since I've been in America, he's the best horse that we've ever had. I don't think we've ever had a horse close to him in ability.”

Joseph hasn't committed to any race after the Fountain of Youth, even the GI Florida Derby. He's hoping that Chance It earns enough points that he will be guaranteed a spot in the Kentucky Derby field, which would mean he might not start again until the first Saturday in May.

“If all goes well in the Fountain of Youth, then we start dreaming towards how we get to the Derby,” Joseph said.

The dream is not yet a reality. But a talented horse from one of the hottest barns in the country figures to make his presence felt on the way to the Kentucky Derby. If not, there's always next year. Joseph's goal is to be the type of trainer who always has Derby prospects, and, yes, he's on his way.