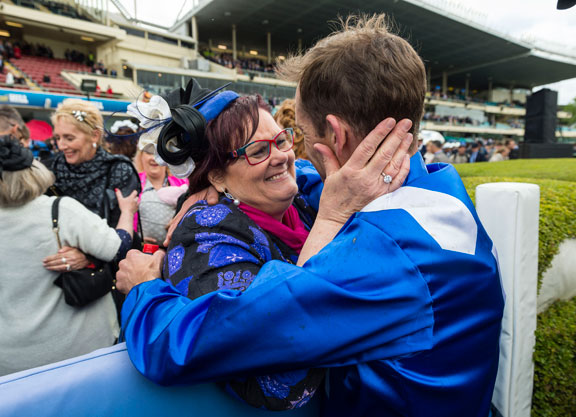 Anticipation is building ahead of Winx (Aus) (Street Cry {Ire})'s seasonal debut in Saturday's G2 Apollo S. at Randwick, and while the champion mare is unaware of the pressure surrounding her, her connections certainly are not.

Winx is owned in a partnership made up of Peter and Patty Tighe's Magic Bloodstock Racing, Debbie and Paul Kepitis, and Richard Treweeke. They acquired her as a yearling for A$230,000 at the 2013 Magic Millions Gold Coast sale, and she has gone on to earn A$9,348,175.

Each owner has had a different experience in the racing game, but all of them are in love with Winx, who has won 13 consecutive races and nine Group 1s in a career that so far is highlighted by her back-to-back victories in the G1 William Hill Cox Plate.

“I get very nervous before her races, especially at the start of her preparation,” said Debbie Kepitis, whose father, Bob Ingham, is known for being one of Australia's most influential owner/breeders of all-time. “I can be quite excitable watching my horses run. I have a catch cry that I use with every win-woo hoo. The pressure builds with each race, but I never dreamt I would be involved in such a great horse. As her winning streak extends, the nerves are huge, but so is the relief, joy and absolute adulation once she's won.”

Then there is Treweeke, who suffers from vertigo, and as a result is not seen as often as his partners. Although he has been involved with horses since the 1950s, he had never seen one of his own win in person. Until Winx.

Meanwhile, Winx is only the second Group 1 winner the Tighes have been associated with, even though they have been in racing for two decades. Their first, Preferment (NZ) (Zabeel {NZ}), secured his first top level score only months before Winx did, and he will also line up in the Apollo on Saturday.

“It has been great to share all of the experiences with the other owners and their family and friends, as well as our family and friends,” said Peter Tighe. “It seems that we have more and more people coming to the races with us each time we race. We had owned horses together before Winx, so it has been a natural progression of our friendship for us all.”

While there, Winx's owners took advantage of an opportunity from Great British Racing International to learn more about racing in England. Although track conditions meant racing was abandoned at Ascot on the day they were supposed to attend, they did get to spend a day in Newmarket. Activities included visits to trainer Ed Dunlop's yard, The Jockey Club, Juddmonte Farms, Godolphin, and the new National Horseracing Museum at Palace House.

“I love to see working stables,” said Kepitis. “To be welcomed to visit Ed Dunlop's yard and see the routine for his last lot was special. I was aware there were differences in the training patterns from Australia to Europe, but seeing them first hand opens it up better than being told.”

“Palace House is an absolute tribute to all who have worked tirelessly to bring it to fruition,” she added. “Paul, my husband, loved trying the horse riding simulator. He told Hugh Bowman every detail of the ride. Juddmonte is beautiful, and to get to see Frankel, as well as all the stallions there, was such an honor. Frankel's temperament is wonderful, and he happily allowed us to all take photos with him. It was a very full day, but we all enjoyed everything and took away so much.”

Of course, when her connections were in England, it led to plenty of questions about if the racing world will get to see Winx abroad as well. Waller confirmed that while it is under consideration, in 2017 Winx will stay in Australia and point for a third Cox Plate. The mare's ownership group leaves the decision- making up to him, and they are all excited about the possibility of the Cox Plate triple.

“The Cox Plate is an iconic race in Australia, and now it is a significant world race,” said Tighe. “Just to have a runner in this race would be a once in a lifetime experience, so to win one is unimaginable, let alone two. Now, to have a chance to hopefully compete for a third, is something not even the greatest dreamers could dream.”

The fact that Winx, who will turn six later this year, is expected to race throughout 2017 is a testament both to her talent and the sporting nature of her connections.

“The partners in Winx are primarily racing people,” said Kepitis. “She is a racehorse, and she enjoys racing. She shows us this by her competitive nature and will to win. I like to keep my horses happy, and Winx is happiest when she's racing. Chris knows Winx the best, so we are guided by him. As my dad taught me, use the best people to give you the best outcome.”

Winx's owners are aware that her popularity seems grows with every start, both in Australia and worldwide. Should Winx stay in form and continue to love the game, they are considering taking her abroad in 2018. However, that decision will ultimately be up to Waller and Winx.

“It's touching to have Australia and the world love Winx so much,” said Kepitis. “There was a bit of disbelief for me in her early days, as I was a small part of the adoration given to both Octagonal and Lonhro, and I knew how hard this journey would be. Now to see this adoration all over the world makes me feel so proud.”

For the Tighes, who stayed in racing for 20 years without Group 1 success simply because they love the industry and the people within it, Winx continues to be both a blessing and a learning experience.

“It has been a very satisfying time for us,” said Tighe. “Winx's popularity in Australia and around the world is something that has been a great learning curve for all involved. It is not something you can expect to happen, so we are all learning about how to adapt to the pressure and expectations involved. It is truly a life-changing experience.”

“At all times, her welfare is number one,” Tighe added. “She is obviously closely monitored to ensure that she keeps her zest for racing. If this was to change, we would review all plans immediately. Racing abroad is an option that we have discussed, but a firm decision will not be made until this year has almost concluded. We do see it as a great challenge, and one that would surely silence the critics about her stature in world racing. Either way, she will always be our champion.”