Winx Out a Winner in the Queen Elizabeth 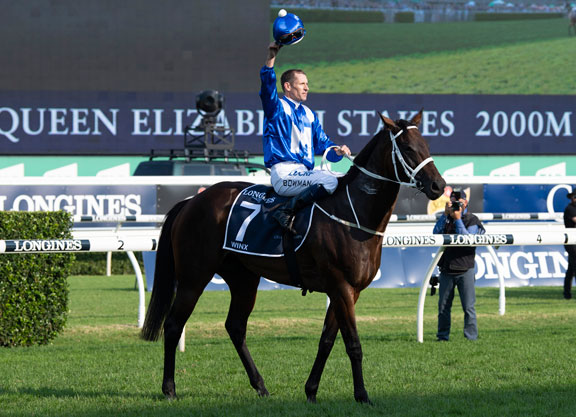 The last act has been played out to rapturous applause as the curtain came down on the glittering career of a superstar of the turf. Wonderful Winx (Aus) (Street Cry {Ire}) bowed out to a rousing reception and one that shook Randwick to its foundations.

Winx has held the racing world in awe for the last four years, undefeated in her last 33 appearances and a collection of records that have put together a play list that will be heard long and loud for years to come.

And yes, she provided everybody with the send-off they clamoured for by demolishing her G1 Longines Queen Elizabeth II S. rivals. The old maxim that there are no certainties in racing simply didn’t apply to her.

A sell-out crowd of 42,000 fanatical supporters had their dreams fulfilled when Winx waved goodbye with the panache only she could have showcased. On a wildly emotional afternoon at Randwick, the mare of the world did what she does best – win for fun.

Winx was settled back of midfield and one off the fence by Bowman before he urged her around the field from the 700 metre mark and they swung widest into the straight.

“This is a fairy-tale ending. We weren’t sure we would get that, but how wonderful with that girl,” part-owner Debbie Kepitis said. “She is the most amazing, supreme athlete that I think I’ve ever seen and handled by the most supreme coach. It’s very exciting to have this come to fruition. Congratulations to everybody who has ever been involved with this wonderful mare. The farriers, the dentists and the chiropractors, every person – they all deserve accolades as well.

Co-owner Peter Tighe also paid a special tribute to the conditioning skills of trainer Chris Waller, who celebrated his 100th Group 1 success in the Queen Elizabeth.

“He’s the captain of the team. It’s been really exciting and it’s amazing what it’s all done for racing,” he said.

Winx’s career was one littered with firsts. She owns a world record 25 Group 1 titles and her credits include a surely never to be beaten four consecutive G1 Cox Plate victories as well as quartets of wins in the G1 George Ryder S. and the Chipping Norton S. She has also won the last three Australian Horse of the Year titles.

WATCH: Winx makes it 33 in a row in the Queen Elizabeth