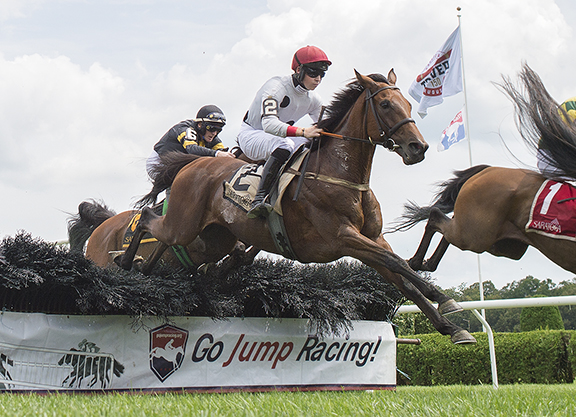 This year has been better, much better. On July 25, Swyer went to the winner’s circle after his Winston C (Ire) (Rip Van Winkle {Ire}), cruised to a 3 1/2-length victory in the Smithwick. He was sufficiently confident going into Thursday’s New York Turf Writers that he took several friends with him into the paddock before the race.

Bringing along a gaggle of friends can be an embarrassing disaster, but not this time. Winston C, trained by Jonathan Sheppard and ridden by Thomas Garner, duplicated his victory in the 2 1/16-mile Smithwick and widened his winning margin to 8 3/4 lengths in the 2 3/8-mile New York Turf Writers.

Swyer had acquired Winston C in the spring after he was shopped to the Sheppard team by Garner and his bloodstock partner, Noel Fehily, a now-retired jockey who had spotted the five-year-old when riding him to a maiden victory at Wincanton in January. When he bought Winston C, Swyer was thinking that maybe this would be his Saratoga horse.

Winston C had finished third in his first U.S. start, a novice stakes in Nashville in May, before the Sheppard crew in Pennsylvania applied the spit and polish to him for the Smithwick. He looked terrific for the Smithwick and perhaps more muscled when he went onto the yielding inner turf course for the New York Turf Writers.

Swyer had reason for confidence. Even though Winston C was conceding at least eight pounds to more experienced competitors, he had beaten all seven of them in the Smithwick and was pulling away from them at the line. Saratoga’s bettors liked him a lot, too, almost at 1-2, and he paid $3.10 to win.

Unlike the Smithwick, Winston C was closer to the early pace, roughly six lengths behind Buttonwood Farm’s pacesetting All the Way Jose (Senor Swinger), bred and trained by Sheppard.

“They [Winston C and Garner] were just a tad closer earlier this time,” Sheppard said. “It was probably a little slower pace, and he was able to have some closer contact with the leaders.”

Garner tipped Winston C to the outside on the final run down the backstretch and allowed his smooth-jumping mount to draw closer to the leaders as the field jumped the final fence.

Harold A. “Sonny” Via’s Hinterland (Fr) (Poliglote {GB}), who had been third in the Smithwick for trainer Jack Fisher, struck to the lead a few strides past the last fence with Winston C to his outside. The five-year-old’s superior speed kicked in on the far turn, and Winston C swept past Hinterland approaching the stretch.

As Hinterland tired, Riverdee Stable’s Gibralfaro (Dalakhani {Ire}) and Belisarius (Ire) (Montjeu {Ire}) hooked up early in the lane. Neither would call it quits, and they were still going at each other as they flashed by the finish line. Fisher-trained Gibralfaro never allowed Belisarius to get past him and prevailed by a nose.

The Grand National competition may be supplemented with European talent, as it usually is, but Garner believes Winston C has a shot. “He’s such an honest, classy little horse,” he said. “I think there is a lot more to come from him. He’s still improving.”