WindRacer A Winner For Banke And Furth 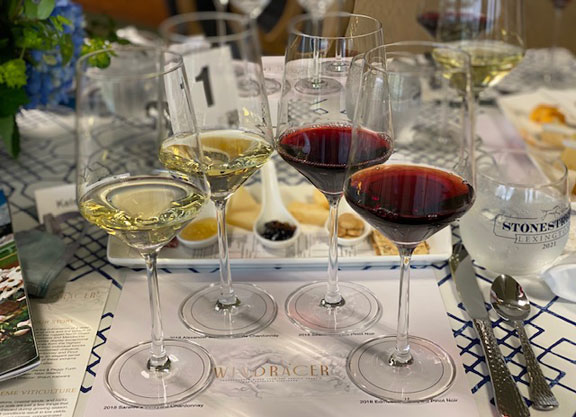 While the next crop of Thoroughbred champions are making their entrance into the world at Barbara Banke's Stonestreet Farm in Lexington, Kentucky, Banke and her friend and business partner Peggy Furth were hailing the arrival of another likely headline-maker at Keeneland on Saturday when debuting WindRacer Wines.

With some of the most notable faces in the racing industry in attendance at the track for Stonestreet Lexington day, Banke and Furth, co-founders of WindRacer, took the opportunity to share their latest project with a discerning audience. It appeared to have been met with unanimous approval.

There are six wines in the boutique WindRacer collection-two Chardonnays and four Pinot Noirs–four of which were unveiled on Saturday. The wines are crafted from grapes sourced from highly select blocks of vineyards in Mendocino County's Anderson Valley and Sonoma County's Russian River Valley. These are areas of “extreme viticulture”-high elevations, coastal winds and rocky, nutrient-poor soils mean that the growing conditions there are challenging and that grape yields are low. But those dedicated enough to nurture them are rewarded with berries that are intense, concentrated in flavour and complex.

The parallels between producing a fine wine and a Grade I racehorse would not have been lost on those in attendance on Saturday.

“There are so many similarities; the dedication, the passion and the precision that it takes to raise a Thoroughbred and to raise a grape,” said Furth. “People may not think those two are related at all, but being in both industries, there are many similarities and it does require an incredible team of people; you can't do either one of these things alone no matter what your dreams are; it takes a lot of professionalism.”

The scarcity of the grapes used for WindRacer mean that the wines are a cherished commodity-only around 200 cases of each variety has been produced. The good news for racing enthusiasts, however, is that they will be among the first to get their hands on it: in addition to being available direct to consumer, WindRacer will be rolled out around major race meetings in Kentucky, New York, California and Florida. It will not be available for purchase in retail shops; it will, however, be served this summer, for instance, at some of Saratoga's most popular restaurants.

“What they're trying to do with this is to keep it very targeted,” said Tom Gannon, advanced sommelier with The Spire Collection of elite wines. “The wines are really only available in California, Kentucky, Florida and New York and targeted at the tracks and the restaurants around the tracks and in a direct to consumer way. We'll do events at certain restaurants in Saratoga-we're already lining it up at the restaurants that Barbara and Peggy like to go to, like the Adelphi, 15 Church, Wishing Well and Village Pizzeria.”

Banke noted they have the option to expand their offerings down the road, but that mass production isn't the goal for WindRacer.

“We can, but we don't want to get big,” she said. “We want to take great little sections of the vineyards and produce wines that are really the Thoroughbreds of their class.”

WindRacer is a labour of love for Banke and Furth, who were highly successful in their individual professional pursuits before pouring their talents and resources into their family vineyards. Banke was a prominent land use and constitutional law attorney before joining forces with her late husband Jess Jackson to help grow Jackson Family Wines. Furth was the first female executive at Kellogg's as vice president of public affairs, and she founded Chalk Hill Estates and Vineyards with her late husband Fred Furth. Prior to WindRacer, Banke and Furth worked together on numerous business and philanthropic pursuits, including founding the Imagine Wine Auction (now known as Sonoma Paradiso), which raised around $6-million for local children's causes.

Horses, likewise, are pivotal in the lives of both women. Banke, of course, is a perennial breeder of Grade I-winning racehorses, while Furth is an international-level dressage rider.

“We've been neighbors in Sonoma County and we've been vintners in Sonoma County so professionally we were at a lot of events together,” said Furth. “Barbara's interest in horses is different than mine; when Jess started his interest in Thoroughbred racing they went in that direction. I'm a dressage rider so I do old and slow horses, and she does young and fast horses. It's interesting in the whole story that we are distinct personalities-we sometimes diverge in our wine tastes as well. We can argue about that and have different preferences, but over many, many years we decided it would be nice to have a wine brand together as girlfriends and have a woman-owned business, so that's how WindRacer was born.”

Banke added, “We have shared interests in horses; Peggy in dressage, and her grandkids do hunter jumper, and me in racehorses. We wanted something that had a horse on the label and we love Chardonnay and Pinot Noir, so we decided to curate some of the vineyards that I own in California and take selected pieces. I have a really good winemaker–Nikki Weerts, who is from South Africa originally–make the wines for us so it's a combination of our interests in wine and horses.”

Furth said that while she has never used Thoroughbreds in dressage, she is “very interested in the lifecycle and care of the racehorse. And I'm very respectful of the New Vocations program and what this industry does for its horses.”

It's not out of the question, either, that Furth and Banke could be enjoying another collaboration this summer, with Furth saying she may take a piece of one of Stonestreet's Royal Ascot-bound runners. Furth said she experienced a “hall of fame moment” when witnessing Lady Aurelia's G2 Queen Mary S. victory with Banke in 2016, and while in town for the WindRacer launch she visited Lady Aurelia and her first foal, a Curlin colt, at Stonestreet.

“It was a hall of fame moment in my life to be with my best friend and watch Lady Aurelia, not really understanding the significance of what it takes to do that,” Furth said. “But I'm learning.”

Banke and Furth have both, however, already worked their way to the top of the wine trade, and their collaboration with WindRacer is sure to be a winner at the major races this summer.