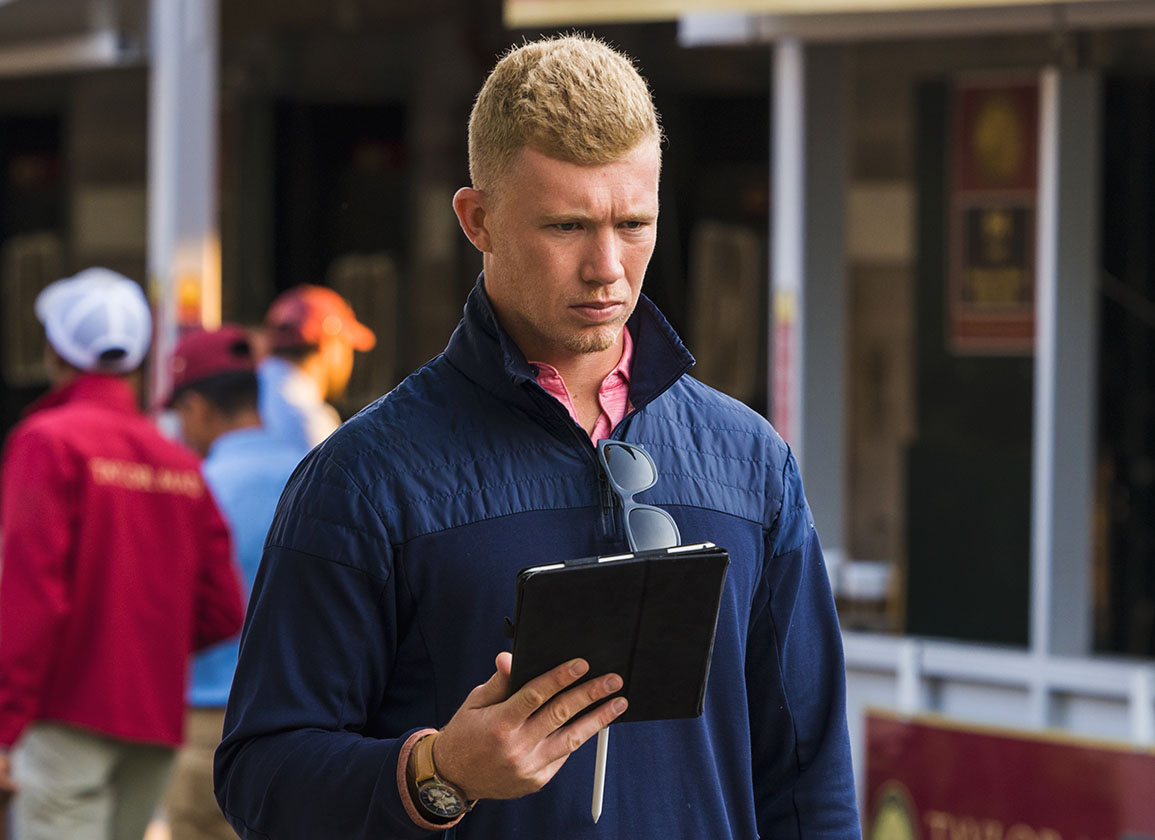 It wasn't that long ago that Will Walden, recovering from substance addiction, was working the morning shift at Wendy's, walking a mile and a half, sometimes in the snow, to get to a job where his duties included scraping old ketchup packets off of the concrete in the parking lot.

“I got to a place that I'm not proud of. I was at the end of my rope. I was broken,” Walden said.

But his time at Wendy's, as humbling as it may have been, was an important step. He needed a job because a job was part of the process, one that he hoped would lead him away from years of substance abuse to a career as a Thoroughbred trainer.

Now sober, that goal is about to become a reality. Walden has 10 horses and is ready to begin his training career at the upcoming Keeneland spring meet.

He is the 31-year-old son of Elliott Walden, the former trainer who is the President and CEO of WinStar Farm. The younger Walden grew up around the barn, was always interested in horses and his father is a leading figure in the industry. He grew up watching his father win races like the GI Haskell with Menifee (Harlan), the GI Belmont S. with Victory Gallop (Cryptoclearance) and the GI Super Derby with Ecton Park (Forty Niner). He said if he wasn't in school he was around the barn. When his father left training in 2005 to go to work at WinStar, he put his equipment in storage, believing that some day his then teenage son would put them to good use.

“I remember when my dad first handed me shank. It was when I was 8 or 9-years-old,” Walden said. “I wanted a pair of Jordans. I couldn't afford them and he wasn't going to pay for them. So, he handed me a shank and had me hot walk to earn the money to buy them. I always had a connection with the horse. When I wasn't in school, every Saturday and Sunday, I was at the barn.”

Considering his upbringing and his family connection, Walden's path into the training profession should have been a smooth one. But nothing is smooth when you are an addict. Around the time he turned 18, the drugs took control of Walden's life. It was no longer a matter of becoming a trainer but figuring out a way to stay alive.

“It's pretty much been a 12-year run,” Walden said. “Started going to treatment centers and jail. I was pretty much an equal opportunity drug user. It wasn't anything specific. It was mainly heroin and crack cocaine and alcohol. Those were my things. It took me to a place where I about lost my life several times. I kept waking up in hospitals or jail cells or with a defibrillators on my chest or Narcan in my nose.”

It's not that he didn't try to get better. It's just that nothing worked. That was until he met Christian Countzler, who worked at Shepherds House, a drug treatment program in Lexington. He convinced Walden to give the facility a try.

“He kind of saved my life,” Walden said. “He was running a treatment facility in Lexington and was a sergeant in the military. He did two tours in Iraq and Afghanistan. I knew his passion and his heart was in it. There was no agenda with him. He just wanted to help people.”

Walden entered Shepherds House in November, 2020. It was at a time that he had hit bottom and was, he said, finally ready to make some changes in his life.

“When I got there, it was at a point where I was going to wake up or I wasn't,” he said. “I called Christian and asked him to take me to detox. I was in such a bad place that a willingness to change had been produced. I have been clean ever since I went into Shepherds House.”

Those going in for treatment at Shepherds House usually stay from 12 to 18 months, but Walden did so well that he was let out early. His 10-month stay ended in September. Next up was the job at Wendy's.

Showing that he was sober and could hold down a job, Walden was ready to start training and his father was there to lend his support.

“He's always been supportive,” Walden said. “He just wanted the personal issues that I had to be in the rear view before this jump was made. Something that he's always told me was 'it's never been your professional life that's been in question. It's been your personal life.' Once those two got on the same page, he didn't see why I couldn't have a successful career doing this.”

In rehab, he made two close friends, Tyler Maxwell and Michael Lowrey. Walden said their support was an important factor in his recovery and he wanted to stay close to them. So, he convinced them, upon their release, to sign up for the Taylor Made School of Horsemanship. The school, created by Taylor Made's Frank Taylor, was created to teach horsemanship skills to people recovering from substance issues and provide them with the skills needed to get a job on the racetrack.

“I'm off at Wendy's or wherever I am at and I get texts during the day from Tyler and Michael,” Walden said. “There were all these questions, like how do I get this foal to walk into the paddock? It had been two years since I had been on the track but I recognized that spark. They had the passion.”

So Walden hired the two as part of his training team.

He expects his first starter will be the 2-year-old Sergeant Countzler (Bolt d'Oro), who was named for Christian Countzler. The colt was bought at Keeneland September for $45,000. It's a modest price, but was part of an overall strategy. Walden wants to focus on young horses who are eligible for maiden races that are restricted to horses that sold for less than a certain price.

“These horses run for $90,000 in Kentucky and for $85,000 in New York,” he said. “If you win or run second in one of those races the odds are you've covered the purchase price or gotten pretty close. Everything after that is profit.”

He will not have any horses for WinStar.

Ten horses isn't going to guarantee success, especially when many of them were inexpensive yearling buys. For Walden, it could be tough at first, but he's not complaining. It beats the life he had been living.