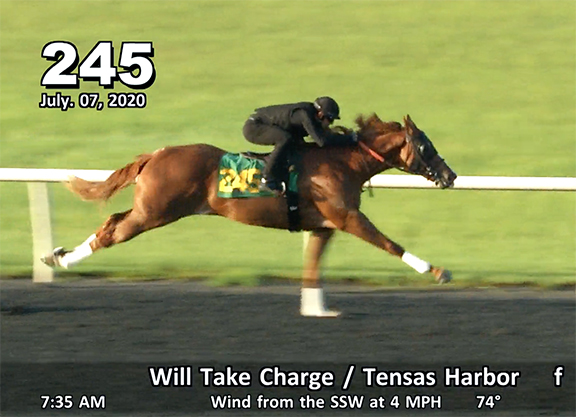 The under-tack show for next week's Ocala Breeders' Sales Company's July 2-Year-Olds and Horses of Racing Age Sale continued with a second session Tuesday and a filly by Will Take Charge tied the week's fastest quarter-mile work so far. Consigned by Top Line Sales, the chestnut filly (hip 245) covered the distance in :20 4/5. The time tied the mark set by a daughter of Shackleford during Monday's first session of the under-tack show.

“She is a nice filly. She prepped over here and her prep was very impressive,” Top Line's Torie Gladwell said. “A couple of the guys in the clockers' stand who work for OBS commented on her later in the day and they said she was one of the best preps they'd seen all day. So that made us feel good. The only question we had was the track conditions because it poured here last night, whether to go an eighth or a quarter, so we were kind of letting the filly tell us what she wanted to do, keeping an eye on her on the way up to the track. She was ready. She is super fit.”

Hip 245 is out of multiple stakes winner Tensas Harbor (Private Vow) and was purchased by Carlo Vaccarezza for $15,000 at last year's Fasig-Tipton October Yearling Sale.

“I didn't go to the October sale last year, but after Carlo bought the filly he texted me and told me he had gotten one I was going to love because I like a lot of white on the horses and she has a lot of white,” Gladwell said. “She has a big white blaze, two big white legs, white right above her tail, kind of freckly. So when she got off the trailer, I said, “Yep. I like this one.'”

Gladwell continued, “We've been trying to sell her privately off the farm and the stallion has just kind of held us back a little bit. But she is a really, really nice filly. She exceeded our expectations and she did everything right.”

A further five fillies shared the bullet furlong time of :10 flat Tuesday, bringing the total to hit that mark through two sessions to 11.

Consigned by Woodside Ranch, a gray daughter of Anchor Down (hip 199) worked in :10 flat. She is out of Storied Tale (Tale of the Cat), a daughter of graded winner Caminadora (More Than Ready), and was purchased by Woodside's Bryan Rice for $22,000 at last year's Keeneland September sale.

A filly by Dialed In (hip 326) out of the unraced Wet N' Reckless (War Front) worked in :10 flat for Q Bar J Thoroughbreds. She was bred by Troy Rankin.

A daughter of Kantharos (hip 331), consigned by de Meric Sales, also worked in :10 flat. She is out of stakes winner Wildcat Heiress (Wildcat Heir). De Meric Stables, as agent for Backstretch Farms, purchased the juvenile for $125,000 as a weanling at the 2018 Fasig-Tipton November.

McKee Bloodstock sent out a filly by More Than Ready (hip 337) to work in :10 flat. She is a daughter of Witchy One (Smart Strike) and a half-sister to graded placed Convict Pike (Broken Vow). Jay McKee purchased the youngster for $40,000 at the Fasig-Tipton October Yearling Sale last fall.

In the day's final set, a bay filly by Bayern (hip 201) also worked in :10 flat. Consigned by Las Palmas Farm, the bay is out of the unraced Storming Gypsy (Midnight Lute), a daughter of graded winner Irish Gypsy (Hennessy). Las Palmas purchased her for $1,200 at last year's OBS October sale.

A filly by Air Force Blue (hip 355) worked the fastest three furlongs of the under-tack show so far when covering the distance in :33 flat Tuesday. Consigned by All Dreams Equine, she is out of the unraced Zeta (Ire) (New Approach {Ire}). She was purchased for $20,000 by Superfine Farms at the 2018 Keeneland November sale and RNA'd for $16,000 at Keeneland last September.

With a combination of balmy temperatures and plenty of rainstorms pushing through the area, OBS has been working hard to maintain a fairly uniform track, Gladwell said.

“It's humid and a lot of that moisture slows the track down,” she said. “OBS is trying really hard to try to figure it out and make it fair for everybody throughout the day and through the week because in the morning it's cooler and it cools off at night and then it gets hot throughout the day. So they are doing two drags, they are not harrowing it as deep.”

Top Line Sales, which sold the $1.35-million topper at the OBS Spring Sale, was one of a handful of Florida-based consignors who chose to skip the Fasig-Tipton Midlantic sale last week and focus instead on the hometown Ocala sale

“It was a really good sale, the market was strong up there [in Timonium],” Gladwell said. “We've had quite a few people call us already regarding horses in this consignment, including some of the Maryland horses. So I think this market is going to be strong as well. Especially for the top horses. There are always people looking for those standout individuals who jump through all the hoops.”

The under tack show continues through Saturday with sessions beginning daily at 7:30 a.m. The show will be held next Tuesday through Thursday with bidding commencing each day at 10 a.m.