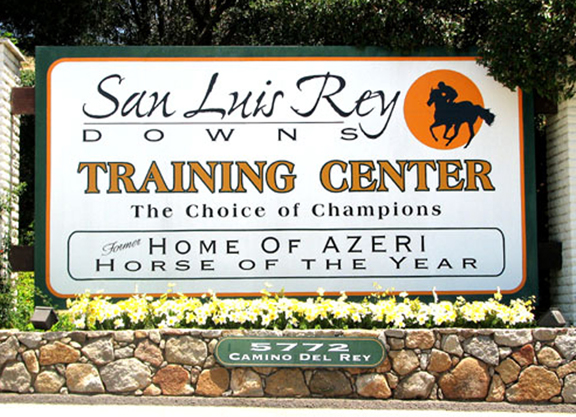 A fast-spreading wildfire descended rapidly on the San Luis Rey Downs training facility in Bonsall, California Thursday afternoon, leaving horsemen with no choice but to turn horses loose on the property to avoid the flames. Images from local San Diego County news stations and Twitter posts from horsemen showed videos of horses running freely on the track and in the stable area as smoke and flames engulfed the surrounding areas. Early reports indicated a number of equine fatalities and destroyed barns.

Trainer Mike Machowsky, contacted via phone by the TDN late Thursday, said his assistant at San Luis Rey reported that the fire began on the nearby hillside and quickly reached some of the barns at the edge of the property.

“Some of the lower barns–portable barns–caught on fire,” Machowsky said, relaying a phone conversation he had with trainer Michele Dollase a half-hour earlier. “They turned horses loose to keep them out of the fire and they [were] running around on the track–that’s what I heard.”

Dollase was taking care of one of Machowsky’s trainees at San Luis Rey.

“They said they’ve never seen anything like it,” Machowsky added.

A major contributing factor to the rapid spread of the fire was the intense Santa Ana winds, which apparently downed palm trees and allowed new fires to begin. Machowsky said other trainers related that it was difficult to navigate around the property as a result of limited visibility, while fire trucks attempted to stake out various barns in an attempt to control the blazes.

“With these winds, you can’t control much,” Machowsky said. “We’ve had the fires before around us…These Santa Ana winds this time of year, they get into the brush and fires start almost instantly.”

The fire in north San Diego County, dubbed the Lilac Fire, forced numerous evacuations among private horse owners in previous days and had reached an estimated 100-150 acres as of Thursday afternoon, prompting Del Mar and Fairplex to open the doors of their stable gates to displaced horses. Keith Brackpool, chairman of West Coast operations for The Stronach Group at Santa Anita, noted that transportation between tracks was made difficult because the fire around San Luis Rey necessitated significant road closures.

“[The] immediate safety of the horses is the priority,” Brackpool tweeted, responding to TVG’s Simon Bray. “[We are] hoping also that the roads open up to allow trailers to evacuate.”

Various reports indicated that the fire crossed some of the main roads around the training center. Among the prominent trainers stabled at San Luis Rey are Richard Baltas, Peter Miller and Doug O’Neill.

David Meah, assistant to Baltas, reported all of their horses were unharmed as of Thursday evening.

“Richard confirmed all of our horses are safe right now,” Meah said. “Our barn is concrete, so ash isn’t going to fall on it and burn it down.”

Meah continued, “I was at Santa Anita and I was getting in my car, but Richard said not to bother because they aren’t letting anyone in. Earlier, vans were allowed in and horses were evacuated to Del Mar, but now they are not letting anyone in. It all happened very quickly–the winds are about 40-60 miles per hour. Richard said several horses died–we all need to pray for the people and horses around there.”

A post on O’Neill’s Facebook page indicated that O’Neill’s assistant Leandro Mora was on site at San Luis Rey to assist with the evacuation process.

“Emergency evacuation happened almost immediately and at this time, we are doing all we can but it’s extremely difficult,” the post stated. “We will update our owners as soon as we can. We ask that you please pray for all of us effected by this horrific event. Southern California horsemen need it right now. Our thoughts and prayers go out to all.”

According to the training center’s website, there are 500 stalls on-site, over 400 of which are occupied.

In a message posted on the Del Mar Racetrack Twitter page Thursday afternoon prior to the fire at San Luis Rey, the track encouraged evacuees to bring bedding, feed and horse identification to make the process go as smoothly as possible. Fairplex had 23 horses residing in its stable area as of Thursday, with more expected in coming days.