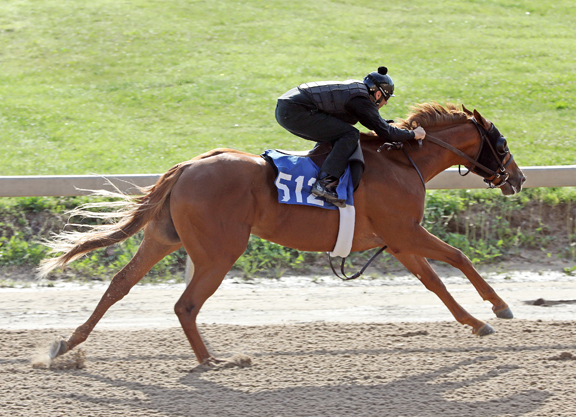 TIMONIUM, MD – The three-day under-tack preview ahead of next week's Fasig-Tipton Midlantic 2-Year-Olds in Training Sale concluded Friday under glorious blue skies and temperatures in rising steadily into the 80s through seven sets of workers.

“It was a terrific under-tack show. All of the credit goes to [Maryland State Fairgrounds maintenance director Don] Chief Denmeyer,” said Fasig-Tipton President Boyd Browning, Jr. “We had challenging weather at the beginning of the week and this racetrack was as good, from beginning to end, as any under-tack show we've ever conducted. The first horse worked very, very well on Wednesday and the last horse worked very, very well on Friday. The consignors brought quality horses to the grounds and we are very pleased with what we saw on the racetrack.”

“He was bought in March by a group from California who bought him to pinhook back here,” explained Ciaran Dunne, whose Wavertree Stables consigns the chestnut colt. “They were buying horses that they thought the sale had come maybe too early for or they didn't fit, but had shown them something on the racetrack. They took him back to California and he was a horse they were very high on all of the time they had him out there.”

Dunne continued, “The plan was originally to sell him out there [at Fasig-Tipton Santa Anita Sale], but obviously that sale didn't happen, so they rerouted to here. This is not the first time they've done this, but it's the first time they brought a horse here.”

The colt worked four times in May and June at San Luis Rey Training Center, most recently going three furlongs in :37.20 June 12. He worked two furlongs June 2 in :21.60.

“He is a big, two-turn looking horse,” Dunne said. “He doesn't look like he'd be that fast.”

The colt is out of E Classic (E Dubai) and is a half-brother to stakes placed E Rated (Special Rate).

Also from the Wavertree consignment, hip 443, a colt by Candy Ride (Arg) out of Causara (Giant's Causeway) worked a furlong in :10 1/5 Friday. Purchased by Ron Fein's Superfine Farms for $175,000 at last year's Fasig-Tipton October Sale, the bay colt had originally been targeted at the OBS March sale.

“He had a little setback through the winter,” Dunne said. “He was originally targeted for OBS March and we could have carried on, but we thought he was such a nice horse that we waited and gave him the time. He's a great big, two-turn type of horse and maybe wasn't suited to this track, but I think at the end of the day, he's got a lot of quality and will be a really good horse down the road.”

Numbers were down at the recent OBS Spring Sale and Dunne said that, while the top of the market remained strong in Ocala, the absence of the usually prolific Korean buyers contributed to much of the declines at the auction which had set records for average and gross the last three years.

Consignor Clovis Crane, who sent out a daughter of Fed Biz (hip 505) to share the under-tack show's bullet time of :10 flat Friday, agreed the absence of Korean buyers due to the ongoing pandemic would likely have an impact on his bottom line.

“I always think that this sale has the truest middle market of any sale that there is,” Crane said of the Midlantic auction. “I really don't have upper-end horses. I buy in the lower end, so this sale suits me the best. I hope that, as normal, the Penn [National], the Parx, the Charles Town, the Delaware Park and the Marylands–all of those trainers show up. And they will because it's home for them. There are five or six tracks within two or three hours, so all of those guys are there. So to me it makes this the truest middle market that there is.

He continued, “But we are going to sorely miss the Korean buyers. I have reached out to them and said, 'If you need any help, I am here to help.' I do think that those folks have some lookers around, so hopefully they can get into the action. I saw that they bought a few horses at OBS, so I am hoping that they found somebody to help them out here. And if they haven't, I'm applying for the job.”

Working in Friday's fourth set, hip 505 was the last of five on the day–and 12th overall at the show–to turn in the :10 flat bullet. Bred by Blackstone Farm, the filly RNA'd for $47,000 at last year's Keeneland September sale and is being sold by Crane in partnership with her breeder.

“We knew she was going to go fast and she showed up today,” Crane said of the chestnut out of the unraced Dream Realized (Awesome Again).

Crane compared the bullet breezer to her look-alike paddock-mate, a daughter of Palace (hip 170) who worked in :10 1/5 Wednesday.

Crane said the extra time between sales caused by the reshuffled schedule had helped his horses this spring.

“The extra time gave us plenty of time to get everything exactly right and have everything lined up and the horses all showed up,” Crane said. “And they are coming back good. It gave us a little extra time where we got a few breezes into them, we gave them a little break and then we got a few more breezes in. And our shins are solid and overall, it's been good for us. And I think the horses have shown it, they have breezed so well and come back well.”

Crane had nothing but praise for the track condition at the Maryland State Fairgrounds this week.

“The track has a little more clay in it than it normally does,” he said. “Which is helpful, it has a little more bounce to it and it feels really nice. And it's been really consistent. Obviously, my Palace worked in :10 1/5 on the first day, the very last set. And this filly was in the fourth set [Friday] and she worked in :10 flat. Normally, you see the really fast ones early in the day, but it's been really consistent. I didn't put my horses in any order, I just threw them in in hip number order and when they went, they went. That's how we did it. All of my horses were going to show up and do what they were going to do whether they worked in the morning or the afternoon.”

Susan Montanye's SBM Training and Sales had two bullet furlong workers Friday. During the first set, the operation sent out a daughter of Frosted (hip 518) to work in :10 flat. Out of multiple stakes placed Enchante (Bluegrass Cat), the dark bay filly was purchased privately by Bill and Corrine Heiligbrodt after RNA'ing for $185,000 at the Fasig-Tipton July Sale last summer.

“She was slated to go to the Gulfstream sale and unfortunately that was cancelled,” Montanye said. “She has always been a super nice filly, always fast, always says yes. I brought her up here because I knew she loved the dirt.”

In Friday's second set, SBM sent out a filly by Dialed In (hip 552) to work in :10 flat. Out of Fall Fantasy (Menifee), the filly was supplemented to the Midlantic auction after scratching from the OBS Spring sale.

“The Dialed In is a ship-in for me that belongs to Kevin McKathan,” Montanye said. “The filly was in the OBS sale and had a good work down there, but they opted to bring her up here and put her in the supplement. They said she was a better dirt filly than she was on the Poly and she obviously proved that today.”

A filly by Maclean's Music (hip 400), consigned by Scanlon Training and Sales, also turned in a furlong work in :10 flat Friday. Out of Ava G (Afternoon Deelites), the dark bay filly is a half-sister to stakes winner Miss My Rose (Magician {Ire}).

“We've liked her all year and we've just been giving her time to develop,” said Dave Scanlon. “We had her sister before, Miss My Rose and we really liked her. So we pursued this filly with the breeder, Alex Venneri, and we are partners on her here.”

Rounding out Friday's :10 flat bullet furlong workers was hip 389, a daughter of Twirling Candy. The dark bay was consigned by David McKathan and Jody Mihalic's Grassroots Training and Sales which purchased her for $30,000 at last year's Fasig-Tipton Midlantic October sale. She is out of Apple Cider (More Than Ready), a daughter of multiple graded stakes winner Who Did It and Run (Polish Numbers).

The Fasig-Tipton Midlantic sale will be held next Monday and Tuesday with bidding beginning each day at 11 a.m.