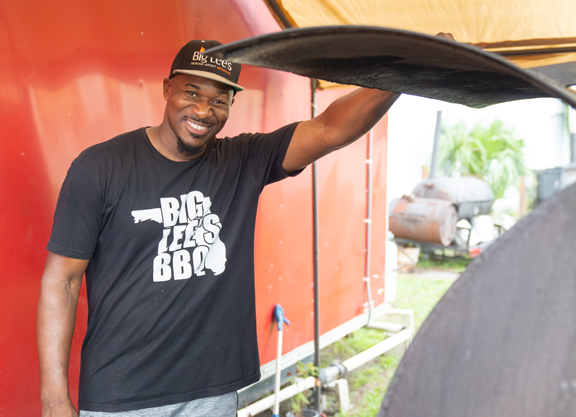 Many a great horse has come through Ocala, whether bred there, broken there, or sold there. Rashad Jones couldn't tell you much about that. He doesn't know the first thing about horse racing. What he knows is barbecue and people in Marion County will tell you no one does it better. That's why you have to line up hours before his Big Lee's barbecue stand opens to get served, why he won a Food Network competition, and why he wants to put Ocala on the map for something other than horses. Forget about Memphis, Texas, North Carolina. Jones wants to make Ocala the center of a barbecue empire.

“I want Big Lee's to become known as the worldwide leader in everything barbecue at some point,” Jones said. “That's a really big, lofty goal, but somebody's going to do it. I always look at that goal and that dream and that desire of mine and say, 'Well, why not us?' I want Big Lee's to become synonymous with barbecue, just like people don't say, 'I need a cotton swab,' they say, 'I need a Q-tip.' When people say, 'I want barbecue,' I want them to naturally say, 'Hey, let's go get some Big Lee's tonight.' All around the world.”

It's quite a dream, probably a completely impractical one. He has, after all, a food truck. Just one. But McDonald's started with one restaurant in San Bernardino, California, and when you believe in yourself and your product as much as Jones does, have charisma, drive, and an abundance of optimism, is there really such a thing as impossible?

Before he was the barbecue king of Ocala, Jones worked for the Marion County Health Department and didn't have much interest in cooking. On what was supposed to be a routine trip to visit relatives for Thanksgiving 2011, his life changed.

His family traveled to the Mississippi Delta to spend Thanksgiving with the relatives of his wife, Patrice. The usual fare-turkey, ham, cranberry sauce, pies-was prepared for the guests, but his wife's uncle, Leon Archie, pulled Jones aside and told him to save some room, that he had something special he wanted him to sample after the main portion of the dinner was over.

Archie had prepared a barbecue spread.

“When I say his barbecue was nothing short of amazing, I mean every bit of it,” Jones said. “His food wasn't only amazing, it left an impression on me. As a Southerner, I'd had barbecue a million times and some of it had been really, really good. But his was in some other space that I had never experienced before. I couldn't imagine how he got his food to taste that good, and it put me on this quest to try to recreate what I had there at his house.”

Jones turned his kitchen into a laboratory and set out to duplicate what Uncle Lee had created. Lee passed away in 2012, so Jones was on own. He kept at it and, in time, believed his barbecue was every bit as tasty as Lee's. But he needed affirmation.

In 2013, he entered the “Bad 2 the Bone BBQ” contest in Ocala. He admits he felt out of place, an amateur who, he thought, stood no chance against contestants who had been working for years trying to perfect their craft.

Compliments like that can't be ignored. He sat down with his wife and said not only had barbecue become his passion, but he now believed he could make a good living selling it. She quickly and readily agreed.

A barbecue business had been born.

Click here to read the rest of this story at The TDN Weekend.

Click here for an additional video tour of the Big Lee's facility.