Why Dallas Stewart Cares About Wins, Not Winning Percentage 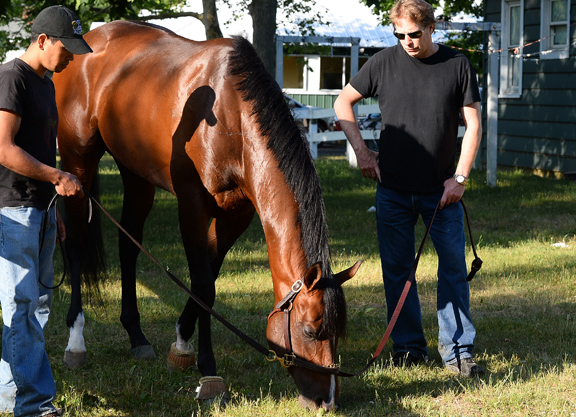 Dallas Stewart will be at it again Saturday at Keeneland, running a horse named Chase the Ghost (Ghostzapper) in the GIII Lexington S., who, on paper, looks like he can't possibly win. That's on paper. On the racetrack, there is apparently no such thing as a Dallas Stewart-trained horse that has no chance.

That was proven once again last week in the GI Central Bank Ashland S. at Keeneland, which Stewart won with 52-1 shot Out for a Spin (Hard Spun). She didn't appear to have the class or the numbers to compete with horses like Eclipse Award winner Jaywalk (Cross Traffic) or GI Alcibiades S. winner Restless Rider (Distorted Humor). Stewart was aware of that. But he also knows when a horse is doing well and isn't afraid to take a shot. He's not a one-trick pony as he has won several major stakes races with horses who went off at low odds, but, at the same time, he has established a reputation as the sport's most dangerous trainer when it comes to long shots outperforming expectations.

“I just felt good about her,” he said. “She came out of New Orleans doing real well. The Ashland is a horse race that can get you to the biggest horse race for that gender and age group, which is the [GI] Kentucky Oaks four weeks later. You know what, it's was a risk worth taking.”

In the end, he was right. But very few major trainers would have dared to run Out for a Spin in a spot like the Ashland. Starting 50-1 shots is usually a recipe for defeat and every loss lowers your winning percentage. A lot of owners don't want to hire people winning at 8%, which is Stewart's percentage on the year, and trainers know that. That's why they rarely take chances.

“I've never been great at numbers and I've never really cared about numbers,” said Stewart, who is winning at a 14% rate for his career. “I just don't think about it that much. I think about today. I live for today and if it's a decision I make today, I'll just go with it and see what happens. I think sometimes the numbers will keep you from accomplishing things. Maybe they'll keep you in business, but maybe they won't get you a Grade I when you think, in your gut, you could have gotten one. As far as the percentage thing goes, I'm not going to live by that. I'll never tell myself I'm not a successful horse trainer because I'm not 20% or 25%.”

Stewart's reputation took root in the 2006 GI Kentucky Oaks, which he won with Lemons Forever (Lemon Drop Kid), who was 47-1.

“The way that worked out was pretty good,” he said. “I owned a piece of her and we sold her for a lot of money, and that made it even better.”

Lemons Forever was sold for $2.5 million at the 2007 Keeneland November Sale.

Stewart has yet to win a Triple Crown race, but his wizardry at getting horses to over achieve in them is well known. He finished second in the 2013 GI Kentucky Derby with 34-1 shot Golden Soul (Perfect Soul {Ire}) and pulled the same trick the next year with Commanding Curve (Master Command), who was second at 37-1. He was second in the 2008 GI Preakness S. with 39-1 shot Macho Again (Macho Uno) and second again in 2015 when Tale of Verve (Tale of Ekati) finished behind American Pharoah (Pioneerof the Nile) at 28-1.

Stewart said that he, more so than most trainers, relies on his instincts.

“I'm kind of a gut feeling guy,” said Stewart, a former assistant to D. Wayne Lukas, another trainer known for winning big races with long shots. “That's the way I work. It's just like the Saints with the onside kick (in the 2014 Super Bowl). Who does that? Then, boom, they go and win the Super Bowl thanks to that play. Sometimes your gut instinct can help you win and sometimes maybe it gets you beat. I don't know. I just go by what I feel.

“That was the case with Out for a Spin. She came out of the Fair Grounds looking really good. I thought she got some weight on her after the last race. One of my top exercise riders worked her and she worked in :48 and change for the race. That was a really good work for her because she's not a really fast work horse, but he said she just felt great. That gave me some confidence to take a shot.”

He'll try again with Chase the Ghost, who is coming off a ninth-place finish in the GII Risen Star at 96-1.

“He's a pretty nice horse,” Stewart said. “I thought he had some trouble last time. He got banged around. I thought he could have finished on the board in the Risen Star, but not enough to make me want to go in the [GII] Louisiana Derby with him. He got knocked sideways at the eighth-pole and I thought that hurt him little bit. We're going to give him another shot, and for some pretty good money [$200,000].”