Who's Your Favorite Horse? with Michael Callanan and Joe Bianca 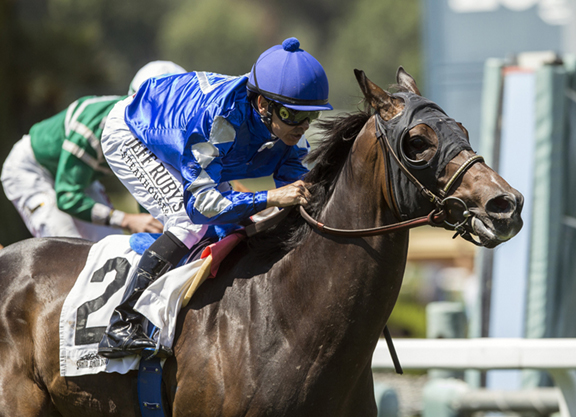 My favorite horse was, and still is, our old boy Nessy (Flower Alley). In 2018, Ed Hudon wasn't doing very well, and it seemed every good horse we came up ended up coming up with an injury or being not quite good enough to win a graded stakes.

Ed and his wife Sharon had never won a graded stakes up to this point and time was running out. Ian Wilkes had penciled in the GIII San Juan Capistrano which was Ed's favorite race at Santa Anita Park that year, and although it wasn't a stellar renewal, Nessy won impressively. I'll never forget the call from Ed after the race that he could die a happy man now. That's how much racing, and in particular Nessy, meant to him and Sharon. Ed passed away in September of that year a happy man. No horse could mean more to a man than Nessy did to Ed.

Nessy is still going strong. He was second in a Grade I race last year and ran once this year but ended up being quite sick after the race. He's a blue-collar horse who will always give his best, and that's all we can ever ask from these beautiful creatures.

Best: This is a bit more of a debate for me between Tiznow (Cee's Tizzy)and Ghostzapper (Awesome Again). I was at the GI Breeders' Cup in Texas when Ghostzapper won the Classic. He was a freak, no other word can describe him. Tiznow won possibly two of the greatest races ever, beating Giant's Causeway and Sakhee in consecutive years of the Classic, in 2000 and 2001. An absolute warrior. Both horses came around at the start of my career in the business, so to be able to see them and breed to them regularly has really been quite special.

I talked about it on the TDN Writers' Room presented by Keeneland podcast a few weeks back, but my favorite and the best horse I've ever seen are the same animal: Ghostzapper (Awesome Again). Unfortunately, because of issues with his feet, he only ran 11 times in his 2 1/2-year career, but when he ran, he was almost always brilliant, winning nine times and missing by a half-length in another start.

After capturing three of his first four outings, he flew home to be a close third in the 2003 GI King's Bishop S. He would never lose again. That was my first year following horse racing, and my first memory of having my jaw dropped by a race was Ghostzapper's devastating win next out in the GI Vosburgh S. Behind by double digits at the first call like he was in the King's Bishop, the Adena Springs colorbearer was still off the screen as late as the five-sixteenths pole, and sixth as the furlong marker arrived. Within a few jumps, he was in front, and he rocketed away from there to a 6 1/2-length rout (video).

From then on, I was fixated on the first horse who ever took my breath away. True to form, he went to the bench for over nine months before returning with an easy win in the GII Tom Fool H. He then tried two turns, despite the questions of assistant trainer Chad Brown, in the GIII Philip Iselin S. at Monmouth, and responded with a 10 3/4-length win and a 128 Beyer, the highest figure recorded in 17 years.

I was in the building Sept. 11, 2004 when Ghostzapper had the toughest battle of his life in the GI Woodward S. at Belmont. Despite being carried out and leaned on for nearly the entire stretch by the following year's Horse of the Year Saint Liam (Saint Ballado), he prevailed by a resilient neck. Drawn the rail in the GI Breeders' Cup Classic at Lone Star Park, he did something he had never done before, going to the lead, and produced a wire-to-wire beating of one of the strongest Classic fields ever assembled, locking up his Horse of the Year trophy.

He only ran one more time, again with me in attendance, making an early blitz and cruising to victory by 6 1/4 lengths in the 2005 GI Metropolitan H. His brilliance is undeniable, but what I'll remember most about Ghostzapper is his versatility. He won on the front end, stalking and closing from the parking lot. He won at six, six-and-a-half, seven, eight, nine and 10 furlongs. He won on fast, muddy and sloppy surfaces. He took whatever the circumstances gave him and found a way to be dominant. It's been 15 years and I still haven't seen his equal on the racetrack. I suspect even another 15 years won't present it.