Who's Your Favorite Horse: with Chris Baker and Philip Antonacci 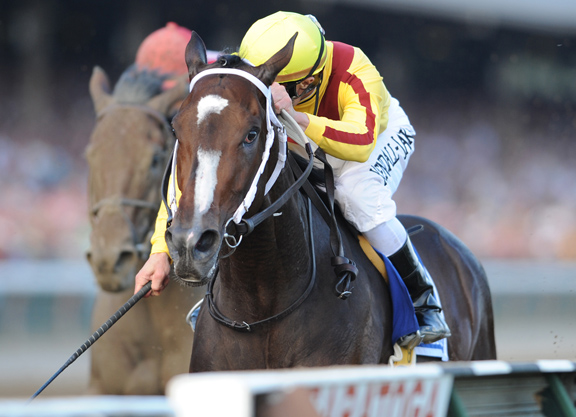 This is a difficult choice for me. I have had the good fortune in my professional career, both on the racetrack and in breeding farm management, to work with many outstanding racehorses and get to know them beyond the limited amount you learn from watching races or studying past performances.

From A.P. Indy, Kotashaan (Fr), Phone Chatter, Siphon (Brz), Soul of the Matter, Afternoon Deelites and Gentlemen (Arg) in racing to Saint Liam, Quality Road, Raging Fever, Summer Colony, Gygistar, Gun Runner and Guarana on the production and management side, I have been lucky to be around some great competitors.

Ultimately though, my favorite racehorse of all time is Sandpit (Brz) (Baynoun {Ire}). Sandpit is my favorite because he was a gentleman and a warrior. His temperament, athleticism, competitiveness and durability made him great. He brought his best and slugged it out every day in training and in every race he ran. Yet, as fierce a competitor as he was on the track, he was equally as kind and gentle around the barn once the tack was off.

I remember when he first arrived at Richard Mandella's barn (where I was assistant at the time) from Brazil as a 3-year-old and Mandella asked what I thought of him. I said that I really liked him; a big, handsome, powerful and scopey horse, but that I wasn't sure how long he would last, as he already had some roundness to both front ankles. Well 36 starts with nine Grade I wins over a seven-year racing career later, I had clearly underestimated how tough and resilient this athlete was.

In the end, though, his temperament is what makes him my favorite; he was as kind, genuine and honest as any racehorse I have ever been around.

For me the best racehorse of modern times in American racing is Secretariat (Bold Ruler). It is very difficult to compare horses that have never raced against each other. As such, to measure and decide between Man 'O War, Citation, Native Dancer, Dr. Fager, Seattle Slew, Affirmed, Spectacular Bid, American Pharoah and other great racehorses of the past 100 years (even though Seattle Slew and Affirmed did face each other) is a challenging process that can easily support many of the candidates as being the best.

Secretariat is the best in my book because of his accomplishments in a two-year racing career where he was precocious, brilliant, sound and long-winded enough to win the most important races in this country from six to 12 furlongs. The ultimate American racehorse (and stallion prospect) has the speed and precocity to win the championship-caliber events at two and the class, stamina and durability at three to compete in or win Triple Crown events before besting older horses later in the year. Secretariat did all of this and more.

The deciding factor for me in choosing Secretariat over all others is tied to the five-week span from May 5 through June 9, 1973, where he won the Triple Crown and set track records in each race. Racehorses only have to beat who they run against. The competitiveness of the fields each of the greats faced and beat in their careers can be hard to compare but the clock is constant. So, for that five-week period in the spring of the 3-year-old year where greatness in American racing is measured, no horse has been faster or better than Secretariat.

Favorite: My all-time favorite racehorse would have to be Rachel Alexandra (Medaglia d'Oro). Her 3-year-old year, I was 14 years old spending the summer with my brother, who was training standardbreds, and I couldn't get enough of racing, both breeds. It just seemed like the perfect year of racing drama: longshot wins the Derby, Rachel romps in the Oaks, they meet up in the Preakness; she asserts her dominance, she dominates the boys in the Haskell, and blitzes the boys again in the Woodward. I vividly remember seeing her in the Saratoga paddock and knowing that I wanted to spend my life aiming to work with an athlete like her.

Best: I must qualify my assertion of the best racehorse of all time as one that I have seen in my lifetime. For me this is American Pharoah (Pioneerof the Nile), the one who ticked all the boxes to qualify him as the greatest: a champion 2-year-old, a model of consistency, and a Triple Crown winner. It amazes me that he was so good all the time. As we all know, racehorses can be highly inconsistent, even the top ones. For Pharoah to perform at such a high level and to do so from his 2-year-old season, through the Triple Crown, and to culminate in a Breeders' Cup Classic win is nothing short of remarkable.

Not only his physical ability to withstand a campaign as such but his mental fortitude to handle the pressure of racing, training, and his immense popularity leads me to believe that he is the greatest that I have ever seen.