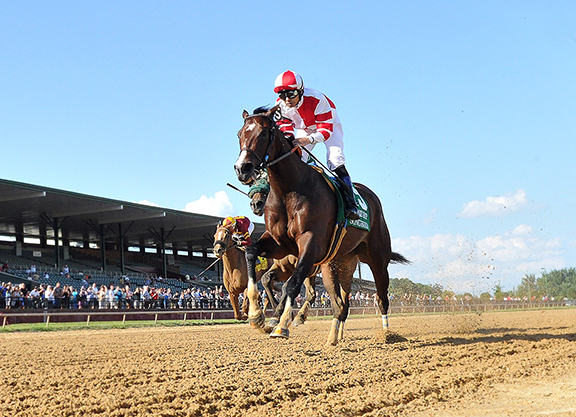 The two-time Fasig-Tipton sales graduate has been a personal favorite of mine since first seeing her as a yearling. Back in 2014, my friend and Fasig-Tipton colleague Dennis Lynch returned from a yearling inspection trip in California raving about a Medaglia d'Oro filly he had accepted for our Saratoga Sale. Whenever Dennis talks up a horse, you better listen, as he is one of the best judges around. That filly turned out to be Songbird.

Songbird was easy to fall for, showing like a queen at Saratoga where she was purchased by Rick Porter. She would go on to win her first 11 starts by a combined 60 lengths, and a retire a two-time Eclipse Award Champion, Breeders' Cup Champion, and nine-time Grade I winner of $4.6 million. It was especially gratifying to be a part of her subsequent sale at the 2017 Fasig-Tipton November Sale, where she sold for $9.5 million. She will always be a personal favorite for many reasons.

I unfortunately never saw him run in person, but I've watched all his races and read about him extensively. At two, he was named Horse of the Year–an incredible feat in itself. At three, he captured the 1973 Triple Crown with track records in both the GI Kentucky Derby and GI Belmont S., records that still stand today. A teletimer malfunction in the Preakness left his final time in that race up to debate, but many contend that he set a new track record there, too. And, not to mention, he won the Belmont by 31 lengths. Who does that?

In the late 2000s, I had the privilege of doing some work for David Moore, who campaigned the one-eyed, blue-collar Pollard's Vision, in helping him to monitor the sire's early progeny.

Among those was a similarly blue-collar filly out of a Best of Luck mare bred by Fairlawn Farm, an $11,000 Fasig-Tipton July yearling purchase by Juvenal Diaz's Omega Farm and bought back by Diaz for $10,000 at OBS April the following spring. She paid nearly $14 when she won her maiden by better than 13 lengths a few months later at Calder, an effort that caught the eye of Jerry Hollendorfer. She would go on to win the GI Oak Leaf S. and, in arguably the performance of the year by a juvenile filly (ask Vic Stauffer what he thought), the GI Hollywood Starlet S. A narrow third in the GI Breeders' Cup Juvenile Fillies cost her a championship.

Those were the days of synthetics in California, but she reaffirmed her affinity for a conventional dirt surface with a much-the-best score in the GII Fantasy S. in Hot Springs in April 2010. Favored on the first Friday in May, the blaze-faced chestnut was far back early on, but came with a miraculous mid-track rally to best Evening Jewel by a zop. Or a half-zop. I was home working that afternoon, I recall it was a warm day. The windows were open. Still feel sorry for my neighbors. Blind Luck would go on to defeat a certain Havre de Grace (Saint Liam) in the GII Delaware Oaks and again in the GI Alabama S. before giving her a ridiculous amount of weight when going down by a neck in the GII Cotillion S. She was second in the GI Breeders' Cup Ladies' Classic, ahead of Havre de Grace, and should have been a unanimous Eclipse winner. A single vote was cast for No Such Word. I'll bite my tongue.

Havre de Grace was the queen of the hill throughout most of 2011, easily besting Blind Luck in the GIII Azeri S. That year's GII Delaware H. is undoubtedly the most exciting race I've ever seen, as the two rivals locked up down the Delaware stretch, neither giving an inch before Blind Luck got her nose down first. I think I'm still hoarse. Of their six head-to-head meetings, the margin between the two was a neck or a nose on four occasions. Blind Luck was the only female to take down the colors of the eventual Horse of the Year that season.

It's a Hall of Fame-worthy resume, in my admittedly biased estimation. Should that happen, I'm sure there will be a tear or two shed in her honor.