Who's Your Favorite Horse?: Davant Latham 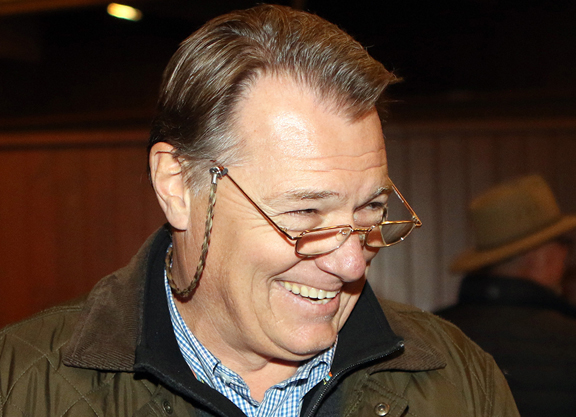 Favorite Horse: As a kid from a non-racing family in Memphis, I became infatuated with Thoroughbreds while at UVA. In 1982 the Champion 2-Year-Old was Roving Boy (Olden Times), who dominated the stakes on the West Coast. Being a direct male line descendant of Man O'War, Roving Boy was not only brilliant but also romantic as the horse that would continue the Man O'War sire line. Roving Boy fractured a cannon and missed all of the 3-year-old classics, but came back in October to run second in an allowance and then ran in the Alibhai S. three weeks later. Roving Boy distanced his competitors in the stretch, but suddenly took a bad step about 50 yards shy of the finish line, staggering home to win, only to collapse several strides later with fractures in both hind legs. His talent, tremendous courage and desire to win coupled with his tragic ending and the dreams of what could have been, have kept him in the forefront of my mind ever since. A largely unsung and forgotten hero who manifested all the best qualities of our Thoroughbreds.

Best Horse: Secretariat–Try as you will, the facts speak for themselves. Although I think Justify showed similar brilliance and ability, Secretariat's career and records stand above all others.

This story was posted in Shared News and tagged Alibhai S., Davant Latham, Roving Boy, Secretariat, Who's Your Favorite Horse.