Whipper's Recoletos Swoops To Conquer In the Moulin 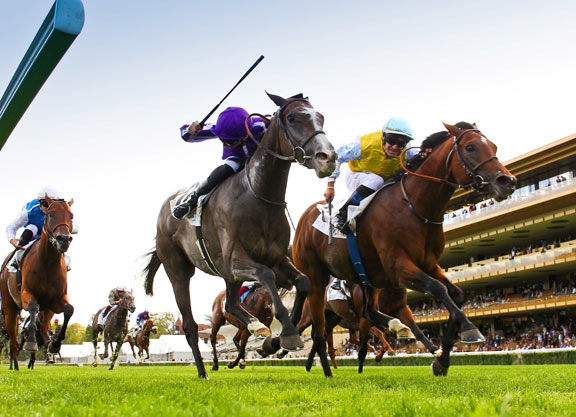 Second fiddle to Europe's current miler par excellence Alpha Centauri (Ire) (Mastercraftsman {Ire}) in the G1 Prix Jacques le Marois, SARL Darpat's Recoletos (Fr) (Whipper) provided further enhancement to that Niarchos homebred's credibility on Sunday when denying a clutch of other 3-year-olds in ParisLongchamp's G1 Prix du Moulin. Held up early as Olivier Peslier demonstrated his habitual and rightful confidence, the 23-10 favourite was delivered with the Papillon's unerring timing to catch the filly Wind Chimes (GB) (Mastercraftsman {Ire}) in the shade of the post and score by a head as the strong-finishing Expert Eye (GB) (Acclamation {GB}) closed to be 1 1/4 lengths away in third. “This is well-deserved–a top-class filly beat him last time and this was a proper group one race on firm ground which he has always gone best on,” trainer Carlos Laffon-Parias commented. “It was a great ride from a top jockey, as ever. If he goes to Ascot, it will be for the [Oct. 20 G1] Queen Elizabeth II and then the Breeders' Cup Mile and we hope we can find him a place at stud.”

While Recoletos is capable of a high standard over 10 furlongs and slightly further, as he proved when winning last year's G2 Prix Greffulhe at Saint-Cloud and G3 Prix du Prince d'Orange at Maisons-Laffitte and finishing third in the G1 Prix du Jockey Club, he has proved truly potent in the category from a mile to the extended nine furlongs over which he collected this venue's G1 Prix d'Ispahan May 27. That followed a smooth success in Saint-Cloud's G2 Prix du Muguet over a mile at the start of May and his trainer believes he had already run his race before the stalls opened for the June 19 G1 Queen Anne S. at Royal Ascot, having been forced to undergo a blood test beforehand which blew him off course. Still beaten only just over three lengths when seventh there, the bay rebounded to run second in a strong edition of the Marois at Deauville Aug. 12 and this was a return to a mile around a turn which so obviously suits his style.

Peslier was content sitting worse than mid-division as the stable's pacemaker Oriental (Jpn) (Smart Strike) took on Wootton (Fr) (Wootton Bassett {GB}) to create an ideal scenario up ahead and he had a clear run in the straight as Plumatic (GB) (Dubawi {Ire}) was the first to make a positive move. Wind Chimes, who had come from the back when third in the G1 Poule d'Essai des Pouliches, was closer this time and as she threw down her challenge it looked for a brief period that it would count but Recoletos was rolling down the outside and his flourish was just too strong for the year-younger grey to withstand. Expert Eye put aside any stamina fears here, finishing as if he needs further and putting in a career-best as he reversed the G1 Sussex S. form with Lightning Spear (GB) (Pivotal {GB}) who was never nearer than at the line in fifth.