Whether Wrestling or Horse Racing, Caruso Has Excelled at Highest Levels 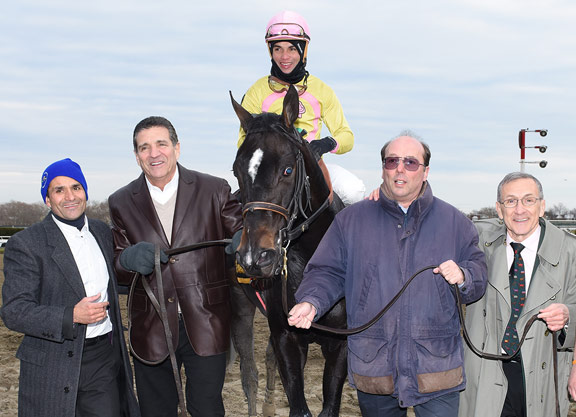 What Mike Caruso missed most when his collegiate wrestling career was over was the competition, the fierce desire to win and the nervous excitement that would build up in him before every match. It wasn’t just that he was good, it was that he felt he had to win every time. Forty-three years after he last wrestled and wrapped up his third NCAA championship, Caruso has recaptured those feelings, discovering them in horse racing.

“I get butterflies in my stomach before every race,” he said. “That means it is meaningful. That’s what my coaches tried to communicate to me. He said that the really great athletes are great because winning and doing their best means everything to them We had kids on the team with a lot of talent but it wasn’t a big deal to them. If they lost they almost didn’t care.”

So he knows how he is going to feel watching at home before Uni (GB) (More Than Ready), a horse he owns along with Mike Dubb, Sol Kumin and Robert LaPenta, goes into the gate for Saturday’s GI Fourstardave H. at Saratoga. His stomach will churn and his palms may get a little sweaty. He says he will feel the same way when his $20,000 claimer Heavy Roller (Malibu Moon) goes in the day’s fourth race.

“People ask me how long are you going to stay in racing? As long as I still get the butterflies in my stomach before a race, I will still do it,” he said.

It’s a way of being that has served him well as a wrestler, a businessman and a Thoroughbred owner.

Caruso, 74, who races under the name of Bethlehem Stable, was introduced to the sport as a child growing up in Newark, N.J. His father, who died when he was 17, would take him once a year for a special outing to Monmouth.

He was introduced to wrestling in high school at  St. Benedict’s Prep in Newark. He started off as 4-foot-11, 81-pound freshman with a “little man’s complex.” By the time he was done, he had amassed an 81-0 record in high school.

Next stop was Lehigh University, where he went 57-1 and won the national championship in the 123-pound weight division as a sophomore, junior and senior. Back then, freshmen could not compete on the varsity level. What made the feat even more remarkable was that all three years he beat the same person, Michigan’s Bob Fehrs. After the last of the three losses in 1967, Fehrs burst into tears. During the awards ceremony, Caruso reached out and held Fehrs’s hand to console him. A photographer captured the gesture and the picture remains one of the most iconic in wrestling history.

Caruso, now semi-retired, went on to have a successful career in the insurance industry. But he never forgot those summer afternoons spent at Monmouth with his father. He bought his first horse in the late seventies and won his first race in 1982.

“I just loved the competition of racing,” he said.

He wasn’t playing at the top level until he was introduced to Dubb, who is partners with him on most of his horses. Dubb, he said, opened his eyes to a different way of doing things. Rather than owning horses himself, he would go into partnerships with Dubb and others. That way he could afford to be involved with many more horses. Currently, he owns parts of about 100 horses.

“I had half a dozen horses and they were okay,” he said. “Mike taught me if you get four, five partners, instead of having six horses you can have 30 horses and have five times the fun, race five times as much, spread your risk and make a lot of new friends. I thought that was a great philosophy.”

His first major success came in the 2011 GI Spinaway, which he won with Grace Hall (Empire Maker), a horse he owned in partnership with Dubb and Stuart Grant. The filly was named after the gymnasium where Lehigh had its home wrestling matches. Grace Hall now includes the Caruso Wrestling Complex, named in honor of Caruso, a 1991 inductee into the National Collegiate Wrestling Hall of Fame.

Things would only get better.

“We really wanted to take the next step up and really race at the top level,” he said.

Caruso was winning regularly at the highest levels by 2018, the year he campaigned Monomoy Girl (Tapizar), his first Eclipse Award winner.

“When I met Mike I thought if I could ever just win a stakes race,” Caruso said. “Winning a Grade I was almost out of the question. When Monomoy Girl had her big year in 2018, we won something like 40 graded stakes. It seemed like every other week we were winning two or three stakes and sometimes two or three in day. It was surreal.”

Few owners in the country were doing better, but many didn’t even know who Caruso was. He was always taking a backseat to high-profile owners in Dubb and Kumin. He ran under a stable name and the horses rarely competed in his colors.

“[Bloodstock agent] Brad [Weisbord], Stu Grant, Mike Dubb, they are the ones who do all the heavy lifting,” he said. “They go to the sales, they do the research, they’re calling around to make deals on horses. They should be the ones who have their names in the limelight. I told Mike that it’s so much easier for the horses to run in his colors. It’s not a big deal to me. If he mentions my name and it gets into the papers that’s fine. If it doesn’t it doesn’t matter to me. I’m in it for the enjoyment.”

That’s another lesson he learned from his days as a wrestler.

“It goes back to my coaches, who were my mentors,” he said. “They said that if you’re good at something you don’t need to talk about yourself. All you need to know is you are good at it. The world doesn’t have to know as long as you know.”

Not that Caruso doesn’t enjoy winning a race like the Fourstardave or being the very best at whatever he does.

“We all want to be superlative in everything we try,” he said. “You can’t. But we try. Winning is very enjoyable. And when you win at the top level in racing it is very, very special because it is rare. There are only so many Grade I races in the country. When you win a Grade I race it lasts for days.”