When Everybody Wins: The Real Rider Cup, Part 2 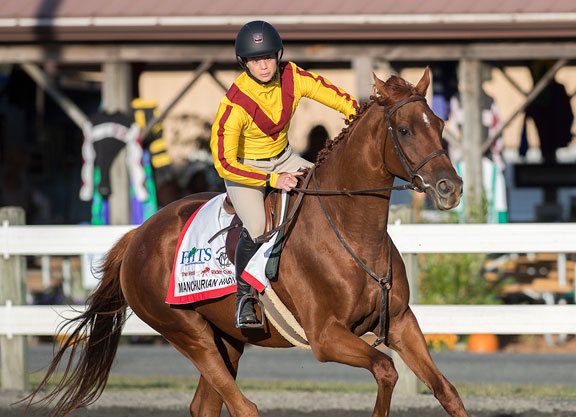 It was a surreal feeling really, to literally be walking in the footsteps of one of my idols while surrounded by so many industry professionals that I've grown to respect and admire over the years. No, I'm not referring to the Kentucky Derby walkover, but the course walk for the Third Annual Real Rider Cup. There I was, walking behind Olympic Gold Medalist and Kentucky Derby-winning trainer Michael Matz as he described a plan of attack. I was trying to keep my jaw from dropping as I took a look around at the competition…I was officially a nervous wreck.

As Manchurian High and I walked around the warm-up area waiting for our turn, multiple people came up and told me their own personal stories about him. Some were old exercise riders, others were former jockeys that have ridden him (to a win, they slyly added), no pressure! Anna Ford was snapping photos for social media and the horses were loving the attention. There was a fantastic turnout for the event. The grandstand was packed with observers giving shoutouts to Forest Boyce and Ashley Castrenze, who had just come from winning the third and fourth races respectively at Laurel and the rail was two deep as everyone wanted to get a look at James Stierhoff and two-time Maryland Hunt Cup winner Twill Do.

“Just keep your leg on him and keep kicking!” Lia McGuirk instructed me as I stood waiting at the in-gate. “No problem at all!” I thought to myself. I was so nervous I could feel my legs gripping Manch's sides in the way that only an adult amateur seems to muster. You know the kind of death grip that causes your horse's eyeballs to pop out of their heads and makes weightlifters jealous? And for some unknown reason you firmly believe that this newfound magical strength in your calves is going to help you miraculously learn how to ride like Mike Smith in the next 30 seconds. Graham Motion himself wished me luck as I walked in, at least I think that's what he said. He could have wished me Merry Christmas but I couldn't hear anything besides the blood rushing from my now ghostly pale face. Now I know why Parker Hendricks rode with his goggles down!

As soon as Manch zoned in on that first fence, all of my doubts, fears and second guesses vanished. I was no longer nervous about riding in front of my new friends/teammates and industry pros. I kicked on as we landed, letting Manch and his sports car-like gallop take over. As in any sport, you must not only have confidence in yourself but your teammate as well. There was no better teammate that I could have asked for than this little war horse. Ears pricked, he galloped right around, making all the tight turns and flying through the timers. The smile on my face as we pulled up said it all. I wanted to know if we could go around for a second time!

I've been a horse-crazy kid my entire life. They've given me some of my best memories, been the subject of some of my worst nightmares, and I've met lifelong friends from all disciplines. At the Real Rider Cup, I arrived not knowing but a few faces and left with a new group of friends. We were all there for the same reason; we were horse lovers, barn rats, lifelong equestrians that want the best for our horses and their futures. We want to show the rest of the world that there is more to this industry than a New York Times article, or a 30-second snippet on the 6:00 news. For every push from PETA to put racing in a bad light, there is a Jen Roytz or Anna Ford working even harder to shine the light on aftercare.

Helmets off to Graham and Anita Motion (who definitely have a future in horse show management when Graham retires from training!), Maggie Kimmitt and their entire team for putting together such an amazing event. It was truly an exceptional display of the best our industry has to offer and I was so honored to be a part of it. From the caliber of riders competing (Kaymarie Kreidel competed sidesaddle, with a bum ankle and a broken stirrup and you never would have known!) to all of the amazing OTTB's that never put a hoof out of place. Every single horse and rider combination looked fantastic and exceeded expectations. Team Racing Media may have finished last, but we couldn't have been any happier. I was most impressed by Team Racing Kids. Knowing they are the future of our sport is quite reassuring.

Special thanks to my sponsor, Stonestreet Stables, and all of the owners that supplied riders with silks for the event! One of my favorite parts was getting the chance to ride around as a girl in gold! Of course a huge thanks to everyone who opened up their wallets and donated to two fantastic causes, New Vocations and The Retired Racehorse Project. We raised a grand total of $54,986 and I challenge the participants of the Real Rider Cup 2020 to do even better!