Home » Archive » Shared News » What's in a Name: A Longlongtimeago and Moliere

What's in a Name: A Longlongtimeago and Moliere 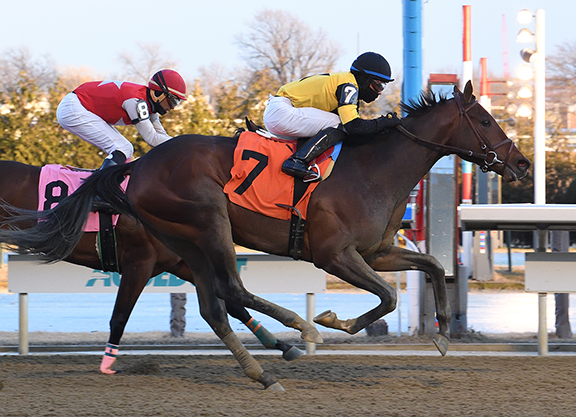 The name of brilliant 1-21 Aqueduct winner A LONGLONGTIMEAGO  (c, 3, Maclean's Music–Carried Away, by Dixie Union) is another direct quotation from Don McLean's 1971 legendary song “American Pie”–just like DAY THE MUSIC DIED, another winning horse by Maclean's Music commented upon in this column. In the case of the name of this brave 3-year-old colt, the line in question is the very first, and magic, verse:

A long, long time ago

I can still remember how that music

Used to make me smile

And I knew if I had my chance

That I could make those people dance

And maybe they'd be happy for a while

The song is supposedly about the plane crash in 1959 that killed early rock-and-roll performers Buddy Holly, The Big Bopper, and Ritchie Valens.

There is so much limelight in the pedigree and name of 1-23 Fair Grounds never-say-die winner MOLIERE (c, 4, Curlin–Comedy, by Theatrical {Ire}). The real Moliere (1622-1673) was veritably the king of theatre and the sovereign of comedy in the France of the Sun King Louis XIV (an indulgent admirer). In a way Moliere, who performed as an actor, too, rose above his time and his native country. His plays are still performed, all over the world, and his influence on classic theatre and the French language is simply immense.

Great name for this tenacious performer. “Five wide for an assault on the leaders,” states the race report–prose that is almost poetry. The historical Moliere, who famously appreciated the distinction between prose and poetry, is probably twice pleased.