What Makes A Dream House a Dream Home? A Remi Mural 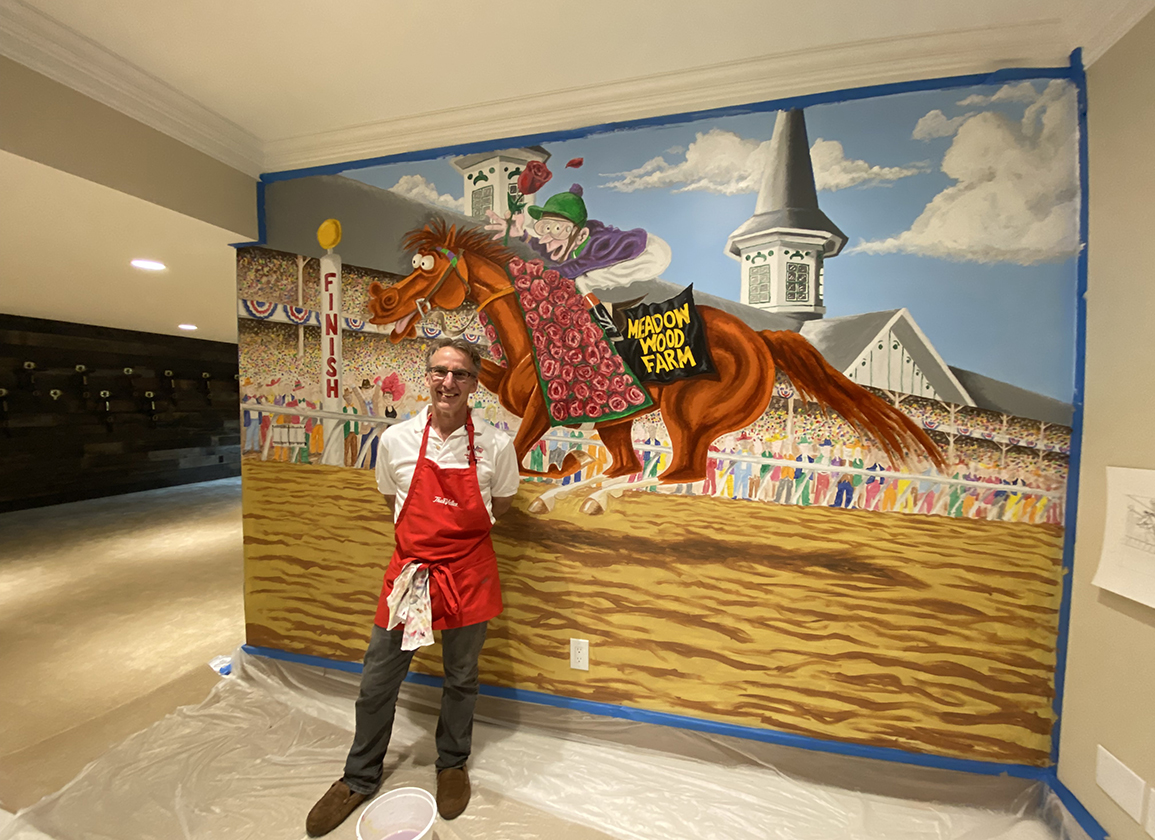 When Tom and Rhonda Carpenter decided that it was time to retire from their automobile dealership business in Ohio, it didn't take them long to decide where their retirement home would be. Saturday, Tom attended his 56th consecutive Kentucky Derby; it was Rhonda's 35th, and the longtime racing fans quickly settled on Lexington, Kentucky as their new destination. They set about meticulously restoring and furnishing a home with enough land to keep future horses on-site, and packed their bags for the Bluegrass. But when the refinished basement was made into a media room, there was a big, blank white wall that needed filling. And so it was that TDN cartoonist Remi Bellocq got started on his first-ever mural.

The Carpenters unveiled the mural to family and friends at their Kentucky Oaks party Friday night.

“As soon as when we bought this house, we were walking around and deciding, `Okay, what are we going to do down here?'” recalled Rhonda, as she sat in the basement for an interview where Bellocq was hard at work on the finishing touches of the mural a week before the unveiling. “Tom has a Derby glass collection. He collects halters,” she said, gesturing to a wall festooned with the halters of famous horses. “We have all sorts of art that will cover this whole house. We thought, “Wouldn't a mural be cool?” We had read an article about Remi, and Tom started Googling him.”

They met with Bellocq, presented him with the idea, and sold him on it, but not without a little trepidation on his part.

Bellocq has been doing cartoons for years, just like his famous father, Pierre “Peb” Bellocq. But while Peb has done several murals–at Aqueduct, Gallagher's Steakhouse, Belmont Park, Churchill Downs, and more–this would be Remi's first. And living up to his famous father's standards figured to be tough.

“As a kid I painted,” he said. “My dad would have us paint watercolors at the beach. We'd go to the Jersey Shore and he'd say, `Okay, paint what you see.' But I never took any classes or anything. He taught me how to mix colors and work with oils and acrylics. The funny thing is that when I was in school and I wanted to take an art class as an elective, he said, `Well…no. I don't know your teachers, but all you're going to do is learn bad habits. Just paint what's natural.'”

When he asked his father for advice on painting the mural, Peb told him, “Start on the left. Work your way to the right. Cover all the white space.”

“His humor is still intact at 95,” Remi observed.

It wasn't long before he developed an even deeper appreciation for the work his father had done.

The wall is five feet high by 11 feet wide, and is painted in acrylic paint.

“The difference between this and working smaller with watercolors and pen and ink is that it's a different medium,” he said, standing in front of the mural in his painting apron. “So you have to kind of work somewhat quickly. The paints dry out, and then if you've got a mix of a color that you're happy with, trying to get it exactly the same two days later when you're going back over it is hard. I realize now all the little tricks that my dad had. When he painted the murals at Churchill Downs and Belmont, he would go to the store and get all the egg cartons he could get, because then he could mix small amounts and then kind match it like that, as opposed to trying to do too much at once. And the funniest thing was that when I started it, I had no idea how far paint would go. So I started on the sky and I'm sitting there with my brush and painting and I'm going, like, `I'm such an idiot.' I mixed my own light blue, didn't have enough, and realized it would never match. So I ran to the True Value hardware store around the corner and bought enough to cover it. Then when I did the dirt track, I did the same thing.” 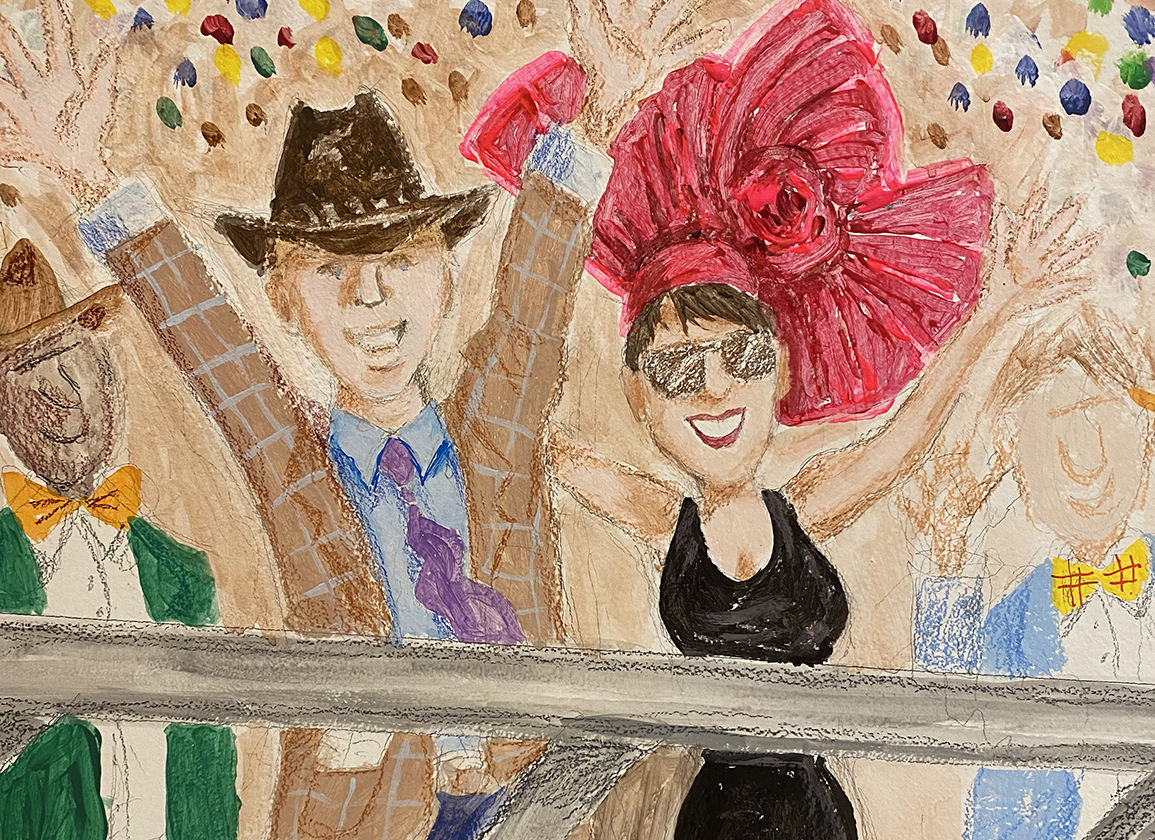 “Derby Dreaming” is the name of the mural, showing a future horse owned by the Carpenters winning the Derby. The horse wears a saddle towel which reads `Meadow Wood Farm,' the name of the new property. When they get around to buying horses and choosing silks, Bellocq promised them he would repaint the colors on the jockey to match theirs. But for now, the colors he was allowed to use are those of the Bellocq family silks-purple and green-“which was a very nice gesture of the Carpenters,” he said. Like in his father's murals, look hard and you'll find people you know. Here, the Carpenters stand by the finish line (she's in a pink hat) cheering home their winner.

“We thought we wanted it to be joyful, at Churchill Downs, and just representing the joy of the day. Remi showed us a couple of sketch ideas, and this was the idea we just loved.”
Bellocq said that for people who have worked a long time in the industry, it can be easy to forget what it was like to be a super-fan looking to get involved. “We've been at it so long that sometimes you forget that there are people out there who just love to get horse halters, and stuff like that,” said Bellocq.

“We're putting up fencing and landscaping the front. Literally, we just moved in. Remi started on this when there was no carpet in the room and there was no paint on the walls. So the house has evolved in the time he's been here, and now we need to put up a barn, and the paddocks, and we hope to have mares and babies in the backyard.
“Moving to Lexington,” she said. “This is the retirement dream.”

And the mural is the icing on the cake.