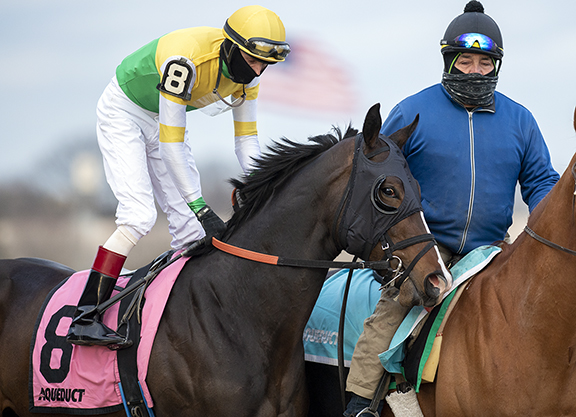 Chiefwood Stables' Weyburn (Pioneerof the Nile) breezed an easy half-mile in :50.93 seconds over Belmont's training track Wednesday in preparation for the Apr. 3 GII Wood Memorial at Aqueduct. A winner going seven panels in the Big A slop last December, the Ontario-bred kicked off 2021 with a nose victory in the Mar. 6 GIII Gotham S., a race in which Weyburn earned 50 qualifying points to the GI Kentucky Derby.

“He just ran hard [in the Gotham] and he's not the heaviest horse in the world, so he didn't really need anything more than what he did on Wednesday,” said trainer Jimmy Jerkens of the breeze.

Weyburn was recently made the 3-1 early favorite for the $1-million Queen's Plate Aug. 22 at Woodbine-the first jewel in the Canadian Triple Crown.

Don Alberto Stable and Qatar Racing's 'TDN Rising Star' Roman Centurian (Empire Maker) is likely to make his next start in the nine-furlong Triple Crown prep, offering 100 Kentucky Derby qualifying points to the winner. The $550,000 KEESEP graduate finished fourth last out to the victorious Life Is Good in the Mar. 6 GII San Felipe S. at Santa Anita Park. The dark bay breezed back for the first time at covering a half-mile in :50.40 at Santa Anita Thursday.

“I think there's a very good chance that we will ship to New York,” said Callaghan. “He breezed very well [Thursday] and we were happy. He'll breeze again next week and it's looking more likely that we'll come.”

After a debut fourth sprinting in a maiden event won by Life Is Good in November at Del Mar, Roman Centurian stretched out to 1 1/16-miles for his second-out graduation Jan. 3 at Santa Anita. He exited that effort to finish a good second in the GII Robert B. Lewis S. at Santa Anita, rallying from last-of-six to miss by a neck to Medina Spirit (Protonico).

“I don't think the race set up very well for him last time,” added Callaghan. “We're hoping that with another race under his belt and moving to a track that we think will be more to his liking, that we'll see a good performance to move him forward.”