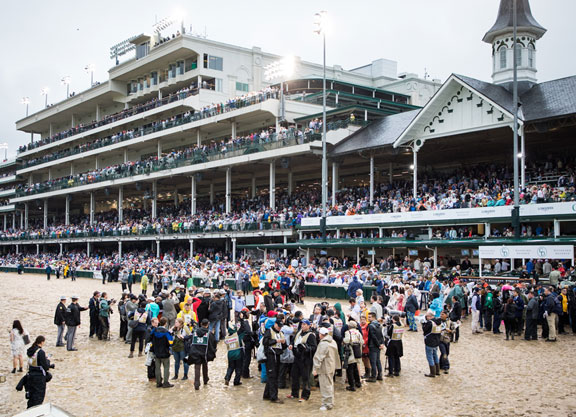 In an attempt to get a federal judge to overturn the controversial May 4 disqualification of the GI Kentucky Derby winner, the owners of Maximum Security (New Year’s Day) filed a civil lawsuit on Tuesday against the three stewards assigned to Churchill Downs, plus the 14 board members and the executive director of the Kentucky Horse Racing Commission (KHRC).

The lawsuit, filed by Gary and Mary West in the United States District Court for the Eastern District of Kentucky (Frankfort Division), does not specifically demand any financial compensation or damages from the defendants.

“The remedy requested,” the suit states, “is a reversal of the decision disqualifying Maximum Security and reinstatement of the original order of finish confirming that Maximum Security is the official winner of the Derby who remains undefeated.”

The 126-page suit cites seven counts as the basis for overturning the DQ, which was the first takedown of a Derby winner for an in-race rules violation in 145 runnings of America’s most famous horse race.

Chief among those counts are that “the final order is not supported by substantial evidence on the whole record” and that the DQ “violates plaintiffs’ Fourteenth Amendment rights to procedural due process.”

The stewards’ post-Derby adjudication process lasted 22 minutes and played out on national TV as they debated whether Maximum Security’s shifting out while leading on the far turn caused crowding that affected rivals in close pursuit and almost triggered a clipping-of-heels accident.

In the aftermath of two jockeys’ objections—but no posted stewards’ inquiry—Maximum Security was judged to have fouled Long Range Toddy (Take Charge Indy) and thus placed behind that rival in 17th  place. Country House (Lookin At Lucky), who crossed the wire second, was elevated to first place and recognized as the official Derby winner.

“As a result of the disqualification, Plaintiffs, the trainer, and the jockey of Maximum Security were denied any part of the $1,860,000 share of the Derby purse as well as a professional accomplishment that any horseman would cherish for life, plus the very substantial value that a Kentucky Derby winner has as a stallion,” the suit states.

Chief state steward Barbara Borden, state steward Brooks “Butch” Becraft, and Churchill Downs steward Tyler Picklesimer are listed as defendants, with a notation that each is being sued in both “individual and official capacities.”

Attempts to reach some of the defendants via phone for comment were unsuccessful prior to deadline for this story.

The plaintiffs’ version of events outlined in the suit keys on “the absence of any inquiry” by the stewards and the fact that only the “meritless” objection by Flavien Prat, who rode Country House, was announced to the public while a second objection by Jon Court, the rider of Long Range Toddy, was neither posted nor announced.

The suit further alleges that stewards were “not truthful” when they issued a post-DQ press statement that said they “interviewed affected riders,” because two rival jockeys whose horses appeared to lose momentum and position (Tyler Gaffalione and Chris Landeros) later told the media they never spoke to the stewards.

After reading their “false and misleading” press statement, the suit alleges, the stewards “refused to answer any questions that might theoretically shed light on the evidence on which they relied, the reasoning behind their disqualification, how their decision to disqualify satisfied the rules governing fouls, and the deliberative process by which they unanimously came to the conclusion to disqualify Maximum Security.”

By refusing to answer media questions and subsequent queries from the plaintiffs, the suit contends that the stewards are depriving the “betting and general public” of the “right to know” about potential officiating conflicts like “any prior business or social relationships [the stewards] may have had with any of the owners, trainers, or jockeys of any of the impacted horses, and any communications with third parties during their deliberations, such as legal counsel [and/or] Kentucky Commissioners.”

The due-process Constitutional angle that the Wests will attempt to leverage centers on the Fourteenth Amendment prohibiting “any State” from depriving “any person of life, liberty, or property, without due process of law.”

The suit argues that “As a result of Maximum Security crossing the finish line first in the Derby, Plaintiffs had a property interest based on their reasonable expectation and legitimate claim of entitlement to any and all of the financial and other benefits that they would otherwise have received as the result of Maximum Security winning the Derby.”

And those expectations, the suit continues, “could only be denied if Defendants first complied with (which they did not) all applicable statutes and regulations…to conclude that there was substantial evidence both that a foul had been committed by Maximum Security and that the foul proximately altered the outcome of the race…”.

To further underscore that point about a “reasonable expectation and legitimate claim of entitlement,” the plaintiffs are arguing that history is on their side.

“In the 144 prior runnings of the Derby no horse that had crossed the finish line first had ever been disqualified by the Commission, the Stewards, or their predecessors as the result of a foul during the running of the race,” the suit points out, despite there being “more egregious circumstances” throughout the history of the Derby.

The remaining five counts that the suit claims are the basis for the DQ reversal are:

1)      The “final order” that DQ’d Maximum Security “exceeds the statutory authority delegated to the commission.”

2)      “The stewards abused their discretion by ordering the DQ.”

3)      “The final order of the stewards DQ’ing Maximum Security is deficient under law.”

4)      The meaning of the word “clear” is “unconstitutionally vague” in the context of describing if a horse moved safely or is “entitled to” any part of the track.

5)      The defendants violated section 1983 of the Civil Rights Act of 1871, “which puts them liable to the party injured in an action at law, suit in equity, or other proper proceeding for redress…”

The plaintiffs are also seeking reimbursement for legal costs and “such other and further relief as the Court deems fair, just, and proper.”