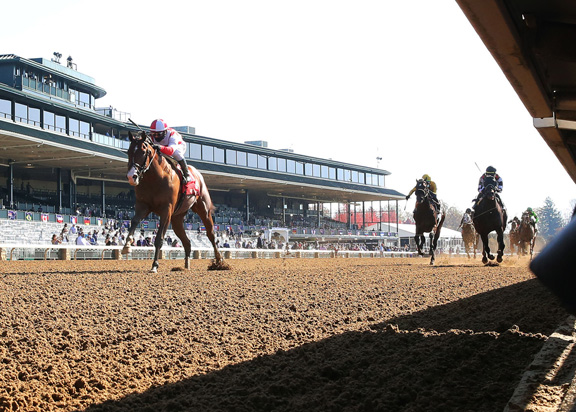 A trio of next out winners from the Nyquist include runner-up Quick Tempo (Tapizar), who followed up with a sharp, wire-to-wire score in the Sugar Bowl S. at Fair Grounds Dec. 19.

Javier Castellano, aboard Highly Motivated in all three of his previous starts at two, makes the trip from South Florida to ride the 8-5 morning-line favorite.

“All three of his races have been excellent, they have been outstanding efforts,” Brown said. “He certainly has kept good company. It looks to be a real solid group of 3-year-olds everywhere, and he's one of them. We rested him a bit and brought him back slowly. We're ready to get his 3-year-old campaign underway.”

The speedy Freedom Fighter (Violence), second choice at 5-2 on the morning line, invades from Hall of Famer Bob Baffert's Santa Anita base. A narrow, wire-to-wire debut winner at Del Mar last summer, he returned from the bench with a very game runner-up finish behind highly regarded stablemate and 'TDN Rising Star' Concert Tour (Street Sense) in the seven-furlong GII San Vicente S. Feb. 6. The dark bay fired a five-furlong warning shot for the Gotham in :59 1/5 (1/63) in Arcadia Feb. 27.

“He ran a pretty courageous race after some time off to finish second to Concert Tour, who I think is a nice horse,” Baffert said. “I wanted to keep him one turn for now. I'm not sure what his distance limitations are going to be, but I think the Gotham is a good step up going from seven-eighths to a mile. He should be ready for that.”

Wipe the Slate (Nyquist), a well-beaten sixth in the GIII Robert B. Lewis S. at Santa Anita Jan. 30, should appreciate this turnback in distance. He was a good-looking maiden winner going seven furlongs two starts back at second asking in Arcadia Dec. 26. Doug O'Neill removes the blinkers for this.

Capo Kane (Street Sense), a much-the-best, front-running winner of the track-and-trip Jerome S. Jan. 1, also cuts back in trip after setting the pace and finishing third in the nine-furlong Withers.