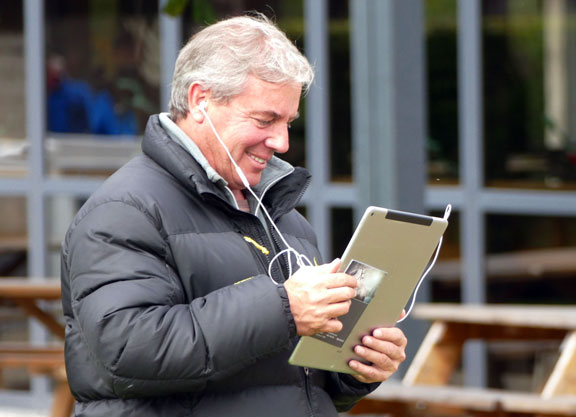 Holding a typically strong hand of 2-year-olds heading into Future Stars Friday at the Breeders' Cup Nov. 6, trainer Wesley Ward joined the TDN Writers' Room presented by Keeneland Wednesday morning. Calling in via Zoom as the Green Group Guest of the Week, Ward talked about Golden Pal, the exciting son of Uncle Mo and Lady Shipman who figures to go favored in the Juvenile Turf Sprint, multiple group stakes winner in Europe Campanelle (Ire) and why he's so willing to run his fillies against the boys.

Telling the story of how he came to train Golden Pal for Randall Lowe, who owned Lady Shipman, Ward said he almost got a chance to train the mare herself and only a veterinary setback let him keep her son in his barn for Lowe.

“When [Lowe] had the mare, he had reached out and asked if I was interested in training and it just didn't come to fruition,” he said. “His ultimate pick was Kiaran McLaughlin. I had followed Lady Shipman's career and was a big fan of hers. Then I went and saw the colt in the sale. I loved him. He was my pick of the sale last year at Keeneland September. We tried to buy the horse for Coolmore and we had a couple months for them to take possession to see if he could get over a minor issue he had, and unfortunately, it's just a minor thing that he was born with. He has that issue today, and he didn't pass the vet. So being as I put a couple months in on the horse, [Lowe] sent him back to Ocala to give him a little bit of time off from the breaking and right around the first of the year, I called him back and I said, 'Look, I'd still be really, really interested in training the colt.' He thought about it for a couple of weeks, then he sent him up to Keeneland and we've had him ever since. He's just been a joy to train, I'm a big fan and I'm looking forward to Breeders' Cup.”

Ward continued his unprecedented run of success for an American trainer in Europe with Campanelle, a 190,000 guineas Tattersalls October purchase by Ben McElroy who parlayed a Gulfstream maiden win into scores in the G1 Prix Morny at Deauville and G2 Queen Mary S. at Royal Ascot this summer. The undefeated bay figures to be among the favorites in a contentious renewal of the Juvenile Fillies Turf.

“She's a little different than the horses that I've brought to Ascot and to the Morny in years past,” said Ward. “She's got a big, long stride and she's fast. So my thought always going into the Morny was that she would go a mile. Even though she has a sprinter's pedigree, she's a big filly. And with that long stride, I took the blinkers off going into the Morny to sort of help her to stretch her speed for this particular race. And it was fortunate, we were lucky. She won a big race that day with Frankie and she got right back here to Keeneland. Ever since then, even before the Morny, this was the plan with this particular race.”

Asked about his willingness to run fillies against males, Ward said, “I took a lot of heat for it at first for running 2-year-old fillies against the colts, but I just think it's pretty easy. If you line a bunch of us up with some women and some men, some women are going to be faster than the guys you put them with, so it's easy to figure where you're at. I think a lot of fillies develop a lot quicker. If you look at the 2-year-old in training sales, the majority of the faster times will be fillies rather than the colts, and the colts will come on late. I like to take advantage of that. The majority of the time, especially in sprints, if you have the fastest horse and you break well, you're going to win early on. I'll zero in and the faster ones come to a head real quick, early in the spring. If that's a filly, I'm more apt to run them against the colts.”

Elsewhere on the show, the writers broke down where every major division stands heading into the Breeders' Cup and, in the West Point Thoroughbreds news segment, talked about what it means for the industry that stallion farms are slashing stud fees nearly across the board. Click here to watch the podcast; click here for the audio-only version.