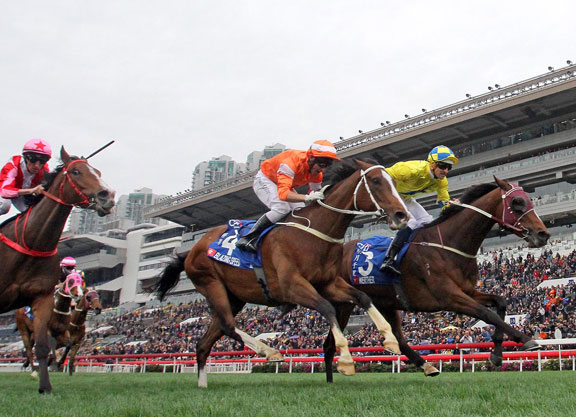 Werther (right) arrives in the nick of time | HKJC photo

About 27 hours removed from guiding Winx (Aus) (Street Cry {Ire}) to a 15th straight win in the G1 Chipping Norton S., Hugh Bowman was given a leg up on reigning Hong Kong Horse of the Year Werther (NZ) (Tavistock {NZ}), who was on trial for a start in the G1 Dubai Turf in Sunday’s G1 Citi Hong Kong Gold Cup. The ride on Werther proved far less straight-forward, but the even-money favorite called on his class to find the wire first and he’ll go to the desert a real chance, according to Bowman.

“I don’t get too carried away with international ratings because it’s hard to assess, but I don’t think there’s any doubt he’s in the top 10 horses in the world on turf, this horse,” he told HKJC’s Andrew Hawkins. “To beat a genuine Group 1 field here in the manner that he did, and to suggest he can only improve with it fitness-wise, if he goes to Dubai he’d have to be a legitimate chance, regardless of the field–as long as he travels over well and settles in.”

Indeed, trainer John Moore pronounced Werther something short of 100% fit for the 2000-metre test and, with Bowman mindful of that fact, things got very dicey when push came to shove Sunday. Settled about midfield as Basic Trilogy (NZ) (Mastecraftsman {Ire}) lobbed along through an opening 800m in just :53.10, Werther was ridden with a gentle touch down the side of the course, given the pre-race reports on his fitness. With three furlongs to travel, two-time defending champ Designs on Rome (Ire) (Holy Roman Emperor {Ire}) was set alight by Tommy Berry and G1 Longines Hong Kong Mile winner Beauty Only (Ire) (Holy Roman Emperor {Ire}) tried to go with that one to his inside. With Bowman momentarily unawares, it left Werther in a tight spot and he had to be checked off the heels of Blazing Speed (GB) (Dylan Thomas {Ire}) just ahead of him. In a race that had been run at a leisurely tempo, it was going to take a good horse to overcome any misstep. Rebalanced, Werther followed the move of Blazing Speed into the final 250 metres, and although the latter–who sat a tactically advantageous trip–wasn’t stopping, Werther was able to dig down and shove his head across the line first, with a final section in :22.10. Secret Weapon (GB) (Choisir {Aus}), short of room inside the final furlong, clung on well for third.

“Just being second-up over 2000m, I felt I was on the best horse in the race, but the other horses I felt had an obvious fitness advantage,” Bowman related post-race. “And that’s why I was inclined to wait as long as I could, and obviously the pressure built and built quickly and that’s when I found myself in a bit of a precarious position at the home turn. But good horses can overcome a little bit of trouble, and he certainly knows where the winning post is. He’s been a great horse for me and a great horse for Hong Kong.”

Secret Weapon also holds entries for the Dubai Turf and the World Cup itself. Trainer Dennis Yip was not yet revealing his hand, as this year’s QE II Cup is Secret Weapon’s main spring target.

With the victory, Werther was taking his record over the metric mile and a quarter to three wins from as many starts, having annexed the 2016 Hong Kong Derby and G1 Audemars Piguet Queen Elizabeth II Cup last term. Forced to miss the international races via injury, he had just the one run under his belt this season, a sixth to stablemate Helene Paragon (Fr) (Polan {Fr}) in the G1 Stewards’ Cup over an insufficient 1600m Jan. 30.

Pedigree Notes:
Werther is one of the early flag-bearers for his Cambridge Stud-based stallion and one of three early Derby winners, a lot that also includes G1 Victoria Derby hero Tarzino (NZ) and G1 Australian Derby victor Tavago (NZ) in addition to G1 Rosehill Guineas champion Volkstok’n’barrell (NZ). Bagalollies looks to have booked an annual trip to Tavistock, as she produced full-sisters to Werther in each of the last three seasons. Her 2014 produce was knocked down to Sona Bloodstock for NZ$300,000 at the 2016 NZB Premier Yearling Sale. Werther’s yearling full-sister is to be consigned by Trelawney Stud as hip 48 to the upcoming Inglis Easter Yearling Sale.